Photos by THT and Ziplines at Pacific Crest

Wrightwood, CA 9/19/18 – (The Hollywood Times) – When two editors from The Hollywood Times hit the San Gabriel Mountains on Tuesday, one had been ziplining extensively; the other was a beginner. But The Ziplines at Pacific Crest are prepared for that.
Despite being what instructors Lexi Discenzo and Casey Solomon called an “advanced course,” the adventure is surprisingly accessible for nearly anyone with full mobility and a craving for thrills.

The Canopy Tour, ZPC’s introductory course, includes 9 zips, 2 rappels, 1 set of suspended sky-stairs, and 2 suspension bridges over a three-and-a-half hour span. No bathroom breaks (the accessible bathrooms are located several buildings away from headquarters), but the experience is so immersive and intense
that the conversation and bonding within the group makes up for inconvenience. 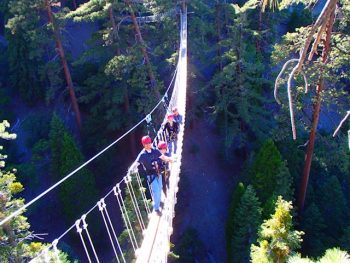 Once the canopy tour is completed, clients are invited back for more extensive tours, like the Ultimate
All Day Adventure, The Mountain Tour, or even the Full-Moon Tour, complete with glow-sticks and midnight refreshments.

300 feet above the forest floor, speeds of nearly 60 mph, ziplines up to 1500 feet long, rappels from 90-foot pines, “Indiana Jones”-style suspension bridges of nearly 200 feet. It’s certainly no cakewalk; and yet those who choose to complete the tour, despite warnings that “there’s nothing safe about this,” and the course itself is substantial, were invariably exhilarated and empowered by the end of the experience.

That’s because, if you value stability, the ziplines will challenge your boundaries in a monumental fashion. Overcoming the task of getting down the better part of a mountain via extreme sports, is
emboldening.

But being that high off the ground can be unsettling, even for the professionals. “I get scared to this day, I don’t like heights,” Discenzo told THT following the tour. Discenzo, along with Solomon, took the group of nine through every single step, making sure everyone was informed, safe, and having a good
time. And she says it “doesn’t get easier,” regardless of her extensive experience. 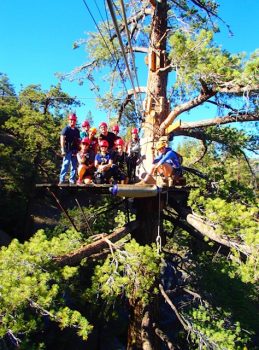 The clientele is its own study in diversity of motivation. In Wednesday’s group, there were two couples
(one married), several individuals, and of course two THT editors. Each sought something individual out
of the tour. Surprisingly, as a date, the ziplines proved to be a bonding experience. To see these
couples view one another with uncertainty and fear, searching to draw strength from each other, then learn to lean on each other for courage and support, and ultimately to celebrate together at the end of the course, was inspiring. One wouldn’t think it would be a good couples activity; but clearly, it’s an  exercise in life experience and trust.
Tour guides Discenzo and Solomon gave each member of the group personal attention, and made a concerted effort to learn all names by heart. The two are almost stereotypically reliable, athletic, and energetic. So what moves a person to give their entire lives to the pursuit of flying in Wrightwood, California?

“I moved here not knowing what the heck I wanted to do,” Solomon told THT. “For me, mostly it’s the people. “You meet your co-workers and they very quickly become family. You learn so much about what you’re doing, and where you are. So it really fills you with the need to just continue.”

Discenzo was already an adventurer by heart. “I’d been traveling around the entire coast,” she said. “I bought an RV, and I came up here to Wrightwood, and looked around to see what there was to do. I found this; I was only going to stay for a couple months, and now here I am. It happens a lot in this town, people come here just to visit and they end up building their lives around it.”

Wrightwood does, at first glance, appear to be extremely tight-knit. Given the magnitude of an experience like ziplining, and the activity’s prominence in this little town, that makes sense. Even after an afternoon tour, the group had come together in a way that isn’t typical for strangers.
Zipliners come from all over, says Solomon, but the family-owned company gets “a lot” from Los Angeles. “We get a lot of local support,” said Solomon. “But they’re not the kind of people that come ziplining every single day, so like all those L.A. folks that come out.”

For those who put themselves to the test, there’s nothing more wholesome than this natural high, among good, down-to-earth people who make clients feel at home. “The best thing about working here is the family environment that the owners provide,” said Solomon.

More information about zipline tours with Ziplines at Pacific Crest can be found at www.ziplinespc.com.  Tours start at  $85 (Quest Tour) per person