The dark comedic and rapid-fire urban piece centers around two star-crossed lovers fighting to stay in love and in trust – while they battle multiple addictions and codependency issues. The other three characters match the duos explosive tempers and struggles. The play opened on Broadway in 2011 and is a favored play to put up. In today’s highly charged political and sexual climate, it makes for a fun and safe choice for director, Gloria Gifford. 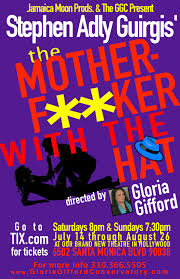 The story takes place in New York City with all the unprintably poetic language coming at the audience gifting each and every character with a unique voice amid the constant turmoil that centers around the life of an addict in or out of recovery and those surrounding him – including the AA sponsor begging the age-old question to be answered over and over – “What is morally acceptable behavior and to whom does it apply?” Or as in the Harvey Weinstein case one could ask – “Who is wrong – the man or the town?”

Guirgis styled a diverse and delicious set of characters to take an audience on a wild ride of raw but relatable emotions in this exceptionally written piece. The poetic notions are lost as this production rails by so quickly that the characters rarely breathe or connect honestly – with the exception of actor, Christian Maltez. Maltez leaps out as Cousin Julio and radiates the essence of watching an actor not at work – he is Julio.

Pulitzer prize playwright, Stephen Adly Guirgis’s writing begs to put the audience in the cross-hairs while rattling a few cages – but the relationships and characters aren’t fully developed as it misfires and loses content, context and most importantly – chemistry.

This production has a nice set, costumes, hair and make-up and some very fine moments but what will make this The Motherfucker with the Hat sing… is the simple art of listening and reacting. Otherwise, it comes across as an old sitcom or daytime soap on steroids. More rehearsals or a mix-up of the dual cast might help these capable actors grow. Many of the dual cast were/are students of Gloria Gifford’s Conservatory.