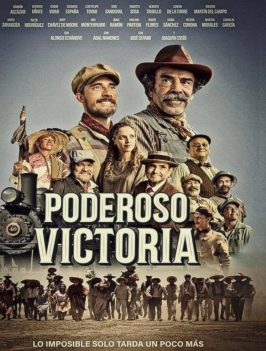 Los Angeles, CA (The Hollywood Times) 11/1/21 – Beginning on Thursday, November 4, is the GuadaLAjara Film Festival (GLAFF) in Los Angeles, a truncated form of the Guadalajara International Film Festival (FICG) which took place in Mexico from October 1 through October 9. Honoring the special relationship between Los Angeles and Guadalajara, this shorter festival features selected films from Mexico. GLAFF opens with a gala screening of The Mighty Victoria (Poderoso Victoria, 2021), a charming film by director Raúl Ramón that won the Audience Award for Best Film at the Guadalajara International Film Festival. The Mighty Victoria Gala will take place at the Ace Theatre in Downtown Los Angeles, beginning at 7:30 PM. This charming film is a tequila western set in the 1930s when the Mexican Revolution was still fresh and President Lazaro Cardenas nationalized the oil industry. The Mighty Victoria also tackles the thorny issues of capitalism versus people’s needs, and it will resonate with contemporary audiences seeking a ray of hope in a world saturated by greedy corporations and the “narco narrations” that populate TV and cinema screens. The cast includes Damián Alcázar, Gerardo Oñate, Said Sandoval, and Lorena de la Torre. For tickets, go to: https://www.axs.com/events/416472/the-mighty-victoria-tickets

Director Raúl Ramón is well known as a cinematographer. He wrote the screenplay, directed, and served as cinematographer on The Mighty Victoria. The uplifting plot occasionally risks becoming sentimental, but Ramón manages to inject more nuanced tones into the story itself. As in some of the British comedies that portray unemployed workers seeking creative solutions as strippers or musicians, here former miners become the engineers of a locomotive and masters of their own destinies. Steam trains are emblematic of a lost era and this story takes placed in 1936. The plot unfolds after a telegram arrives, announcing the tragic fate awaiting a mining village in Jalisco. The local coal mine has been depleted and the train, the villagers’ only connection to the outside world, is to be canceled, condemning the village to poverty and starvation.

As the railway barons begin to rip out the tracks, the richness of the film appears in the solidarity and compassion of the few inhabitants left behind, who refuse to migrate and abandon their loved ones. Escaping on the last train out of town are the politicians and the village priest, whose luggage is carried to the station (which is ironically named Esperanza, Hope) by the two remaining nuns. Touches of humor prevail as Ramon alludes to the endemic ills of 1930’s Mexico: Illiteracy, dependency, corruption. The obstacles facing the villagers appear insurmountable, until a child comes up with the answer to their plight: building their own train. Led by the mayor Don Federico (Damián Alcázar and a young train engineer Durán (Gerado Oñate), they set out to vault the hurdles, until the story reaches its crescendo and tragic finale, rescued in part by the bittersweet victory of the title. 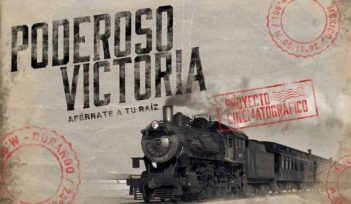 Beloved Mexican actor Damian Alcazar has embodied the evils of corruption in the films of director Luis Estrada, including Herod’s Law (La ley de Herodes) and Hell (El infierno), box office hits that swept up the Ariel Awards, Mexico’s top cinema prize. Inverting his usual role, in The Mighty Victoria the talented Alcazar becomes Don Federico, an idealistic, popular leader who rallies the forlorn desert villagers to overcome the twin disasters of the mine closing and their railway connection to the outside world disappearing. Alcazar is supported by an ensemble cast that reflects the film’s emphasis on collective action, in which ingenuity and determination are able to overturn political decisions that seemed beyond any individual’s control. There’s even a timely nod to environmental solutions, as the villagers turn to tequila biofuel as a coal substitute for the steam train.

Ramón’s cinematography features a series of beautiful sepia-colored tableaux that capture the desolation of the Jalisco and Durango desert landscapes, as well as moments of affection and camaraderie among the desperate survivors. As in many Latin American stories, there are references to indigenous mysticism and magic that contribute to a miraculous resolution. The sweeping music score, composed by Mexican Fernando Velazquez and performed by the Basque National Orchestra, recalls Ennio Morricone’s emotive music for Sergio Leone’s spaghetti westerns. The Mighty Victoria is structured like a corrido, a Mexican traditional ballad that tells a story, here sung with great feeling by composer Belen Rodriguez.