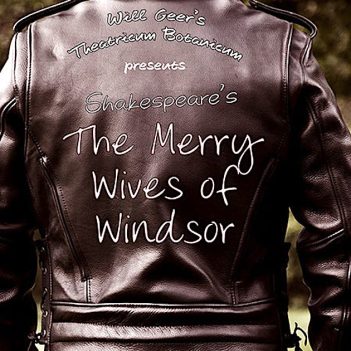 Topanga, CA (The Hollywood Times) 7/25/22 – On stage at the lovely outdoor Theatricum Botanicum in Topanga Canyon on Sunday, July 24, was a production of William Shakespeare’s comedy The Merry Wives of Windsor, which was most likely written in 1597 right after the two Henry IV plays. The Windsor of the play’s title is a reference to the town of Windsor in Berkshire, England and supposedly takes place in the time of Henry IV. But the play makes no pretense of existing outside the contemporary Elizabethan-era English middle-class life of the 1590s. The main character is Sir John Falstaff, the fat knight who had previously been featured in Henry IV, Parts 1 and Part 2. This current production of The Merry Wives of Windsor, directed by Ellen Geer, is set in 1950s Connecticut and the actors are all dressed in clothing typical of the period. This production has a rocking score of ‘50s tunes with new song lyrics by Peter Alsop.

Falstaff (played brilliantly by Jeff Wiesen) arrives in Windsor very short on money and accompanied by his ragtag militia. He decides that, in order to improve his financial advantage, he will court two wealthy married women, Mistress Ford (Emily Bridges) and Mistress Page (Willow Geer). Falstaff decides to send the women identical love letters and asks his servants – Pistol and Nym – to deliver them to the wives. When they refuse, Falstaff sacks them, and, in revenge, the men tell the husbands Ford (Jonathan Blandino) and Page (Bill Haller) of Falstaff’s intentions. Page is not concerned, but the jealous Ford persuades the Hostess (Earnestine Phillips) of the Garter Inn to introduce him to Falstaff as a ‘Master Brook’ so that he can find out Falstaff’s plans.

Meanwhile, three different men are trying to win the hand of Page’s daughter, Anne Page (Alexandria Kunin). Mistress Page would like her daughter to marry Doctor Caius (Cavin (C.R.) Mohrhardt), a French physician, whereas the girl’s father would like her to marry Master Abraham Slender (Ethan Haslam). Anne herself is in love with Master Fenton (Charles Lin), but Page had previously rejected Fenton as a suitor due to his having squandered his considerable fortune on high-class living. Hugh Evans (Alistair McKenzie), a Welsh parson, tries to enlist the help of Mistress Quickly (played by the amazing Melora Marshall) in wooing Anne for Slender, but the doctor discovers this and challenges Evans to a duel. The Hostess of the Garter Inn prevents this duel by telling each man a different meeting place, causing much amusement for himself, Justice Shallow (Tim Halligan), Page and others. Evans and Caius decide to work together to get revenge on the Hostess.

When the two women (Mistress Page and Mistress Ford) receive the letters, each goes to tell the other, and they quickly find that the letters are almost identical. The “merry wives” are not interested in the aging, overweight Falstaff as a suitor. However, for the sake of their own amusement and to gain revenge for his indecent assumptions towards them both, they pretend to respond to his advances.

This all results in great embarrassment for Falstaff. Mr. Ford (Jonathan Blandino) poses as “Mr. Brook” and says he is in love with Mistress Ford but cannot woo her as she is too virtuous. He offers to pay Falstaff to court her, saying that once she has lost her honor he will be able to tempt her himself. Falstaff cannot believe his luck, and tells “Mr. Brook” he has already arranged to meet Mistress Ford while her husband is out. Falstaff leaves to keep his appointment and Ford soliloquizes that he is right to suspect his wife and that the trusting Page is a fool.

When Falstaff arrives to meet Mistress Ford, the merry wives trick him into hiding in a wheelbarrow full of filthy, smelly clothes awaiting laundering. When the jealous Ford returns to try and catch his wife with Falstaff, the wives have the dirty laundry taken away and the contents (including Falstaff) dumped into the river. Although this affects Falstaff’s pride, his ego is surprisingly resilient. He is convinced that the wives are just “playing hard to get” with him, so he continues his pursuit of sexual advancement, with its attendant capital and opportunities for blackmail.

Again, Falstaff goes to meet the women but Mistress Page comes back and warns Mistress Ford of her husband’s approach again. They try to think of ways to hide him other than the laundry basket which he refuses to get into again. They trick him again, this time into disguising himself as Mistress Ford’s maid’s obese aunt, known as “the fat woman of Brentford.” Ford tries once again to catch his wife with Falstaff but ends up hitting the “old woman,” whom he despises and takes for a witch, and throwing her out of his house. Having been beaten “into all the colors of the rainbow”, Falstaff laments his bad luck.

Eventually the wives tell their husbands about the series of jokes they have played on Falstaff, and together they devise one last trick which ends up with Falstaff being humiliated in front of the whole town. They tell Falstaff to dress as “Herne, the Hunter” complete with deer antlers and meet them by an old oak tree in Windsor Forest. They then dress several of the local children, including Anne and little William Page, as fairies and get them to pinch and taunt Falstaff to punish him. Page plots to dress Anne in white and tells Slender to steal her away and marry her during the midnight revels. Mistress Page and Doctor Caius arrange to do the same, but they arrange Anne shall be dressed in green. Anne tells Fenton this, and he and the Hostess secretly arrange for young Anne Page and her lover Fenton to be married instead.

The wives meet Falstaff, and almost immediately the fairies surround a confused Falstaff. Slender, Caius, and Fenton all steal away their brides-to-be during the chaos, or so they think. The rest of the characters reveal their true identities to Falstaff. Slender suddenly appears and says he has been deceived – the “girl” he took away to marry was not Anne but a young boy. Caius arrives with similar news – however, he has actually married his boy. Fenton and Anne arrive and admit that they love each other and have been married. Fenton chides the parents for trying to force Anne to marry men she did not love and the parents accept the marriage and congratulate the young pair.

Explored with irony, sexual innuendo, sarcasm, and stereotypical views of social classes and nationalities (the French and the Welsh), these themes help to give the play something closer to a modern-day view than is often found in Shakespeare’s plays. The treatment of sexual jealousy in the play differs from its treatment in others, like Othello and A Winter’s Tale. The jealousy of Leontes and Othello is dangerous and deep-seated, while Mr. Ford’s jealousy is something to be mocked and laughed at.

The Merry Wives of Windsor plays at the Theatricum Botanicum through October 2. Performances are on Saturdays at 7:30 pm and Sundays at 3:30 pm. Tickets to each performance range from $10 to $42. Premium seating is available for $60. Children 4 and under are free. Will Geer’s Theatricum Botanicum is located at 1419 North Topanga Canyon Blvd. in Topanga, midway between Malibu and the San Fernando Valley.