Hollywood, CA (The Hollywood Times) 12-/2/18- “After the end of the war, when I gained basic liberties that I didn’t have throughout my childhood, I started to become aware and think more about marginalized groups in our society, who are denied the basic rights each human being should be entitled to.”

One of these groups is the LGBT community, who without a question are the most marginalized of all. LGBT community members, although protected by the Kosovo laws, are continuously threatened, humiliated and physically attacked, to which the state turns a blind eye.

Hiding their identity remains the only way to survive in this surrounding, forcing a large number of LGBT people to marry eventually a partner of an opposite sex, who inadvertently turns into collateral damage. In our film, this partner is a woman, already marginalized and without a voice in our patriarchal society,” says Blerta Zeqiri, the director of Kosovo’s Official Oscar Entry The Marriage.

Anita and Bekim are adding the final touches to their big day. Despite expecting news of Anita’s parents, declared missing since the 1999 Kosovan War, and with Bekim’s controlling family in turn, the couple seem to manage somehow with the preparations. But when Bekim’s secret gay ex-lover, Nol, returns from abroad unexpectedly, the situation becomes complicated, especially when Bekim realizes that Nol is still in love with him.  Inevitably, the wedding banquet becomes loaded with tension when the unusual love triangle starts to unravel.

“I wanted to make a hyper-realistic film, where characters actions are followed closely by a hand-held camera, and show the beauty of the love between two human beings, regardless of their gender or their sexual orientation. I wanted, at least for a moment, to make the audience leave the three main characters’ gender aside and feel for them in this complicated triangle, where no decision is without a victim or suffering,” says Blerta Zeqiri and I think she and the team behind this film succeeded- it almost feels like a documentary and you catch yourself thinking it’s unscripted- due to cinematography and masterful cast. 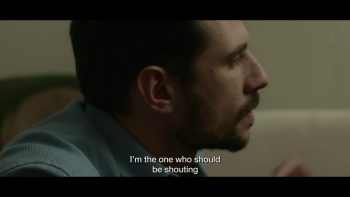 I personally feel this year has been the most fulfilling and diverse in LGBTQ film and TV and The Marriage definitely adds a different angle and perspective to it.