Photo by The Hollywood Times

Hollywood, California (The Hollywood Times) – 5/23/2019 – Guy Ritchie and John August, both co-screenwriters really bring the animated 1992 Aladdin film to a new generation, yes CGI, but well written.  The streets of Agrabah with Aladdin, the street rat and his monkey Abu, shows where Guy Ritchie brought some of the varied speed and camera acrobatic, like stop-action of Lock, Stock and Two Smoking Barrels and Snatch, which was really awesome to watch.

The film shown tonight at the El Capitan Theatre was in 3D. It was a VIP Fan event.  I don’t normally like 3D movies, but I have to say, I feel like that is the best way to watch this colorful film. Us fans received a metal Aladdin bucket and a neat gold magic lamp keychain and small movie poster.

Some fans were able to go step on the historic stage for  magical photo op on the Magic Carpet inside the Cave of Wonders!

Fans were also able to participate in another photo op where they can make a wish and try rubbing the Magic Lamp to see if wishes really do come true! There are costumes on display downstairs as well as props and photos from the making of the film.

The Alan Menken and Howard Ashman’s tune “Prince Ali” was a colorful highlight of bright colors and garish embellishments with a parade of exotic dancers, elephants and other creatures, delightful.

I have say, I was somewhat disappointed with Will Smith’s performance of “Never Had a Friend Like Me” it was Fresh Prince of Bel Air, not Robin Williams.  But who could feel Robin Williams shoes. So if you can just watch it and not think of Robin William’s version of the Genie, you will enjoy that part more.

On a fantastic note, the showstopping “Prince Ali” dance number is worth the price of admission!  There were 250 dances, 200 extras and Massoud’s Aladdin making his entrance atop a 30-foot yellow floral camel made up of 37,000 flower heads.

The character of Jafar did not live up to the 1992 version at all.  CGI Abu the monkey, Rajah the tiger and the Magic Carpet nailed it. 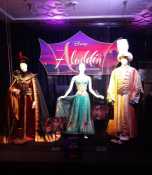 A new song sung by Jasmine (Naomi Scott) called “Speechless” written by Benj Pasek and Justin Paul, taking a term that once meant women should be silent, and still does in many places around the world, and insisting that she will not go unheard is powerful indeed.

When Jasmine climbs aboard the Magic Carpet with Aladdin and serenade each other with the timeless duet “A Whole New World,” you will be swept away in nostalgic goose bumps and happy tears that bring you back to 1992.

So grab the kids, grandma and grandpa and go see this colorful and entertaining film this Memorial Weekend.