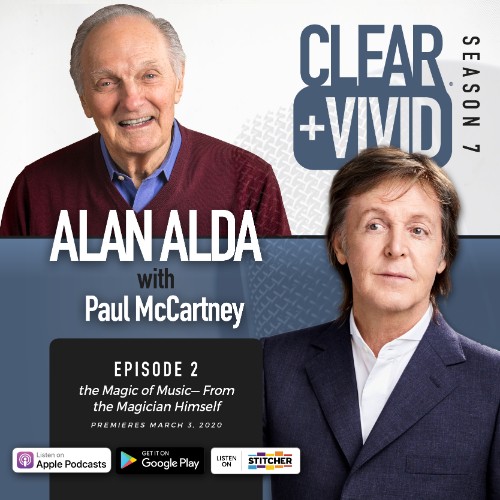 Season 7 of Alan Alda’s podcast – Clear+Vivid® is set to launch Live on March 3rd.  Alan Alda and the legendary Sir Paul McCartney’s conversation will be live on  March 3rd, on all major podcast destinations!

They talk about Paul’s career, as well as the magic, influence, and power of music. During the show’s six seasons, Alan has had intriguing discussions with cultural icons like – Ben Stiller, Julie Andrews, Yo-Yo Ma, Adam Driver, and Carol Burnett.

Clear and Vivid® is a series of Alan Alda’s spirited conversations with people who know how hard it is, and yet how good it feels, to really connect with other people – whether it’s one person, an audience or a whole country.

You’ll know many of the people in these conversations – they are luminaries in our culture. Some you may not know. But what links them all is their powerful ability to relate and communicate. With his unique blend of humor and insight, Alda explores the ways we can connect better with one another in every area of our lives. Something we need now more than ever.