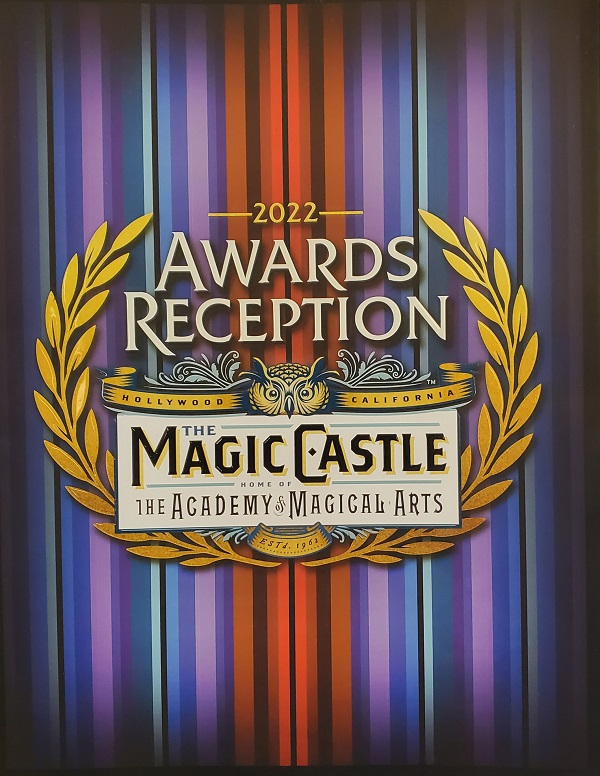 Hollywood, CA (The Hollywood Times) 09/28/2022 “Magic is like Soylent Green…it’s people,” Max Maven said when he was presented the Masters Fellowship award last night at the Avalon Theater.  He went on to say that the first award show was 40 years ago and he was in the audience.

The event last night was a black tie affair with members of The Magic Castle, Board Members, the new owners, and many amazing magicians.  We were all handed a beautiful awards reception brochure with a message from the President, Academy of Magical Arts at the Magic Castle, Chuck Martinez. He writes: “This evening, we resume our tradition of the Academy of Magical Arts Awards Show recognizing those who’ve made extraordinary accomplishments within the art of magic, as well as those who’ve made significant contributions to our club. Just as important, we’re here to celebrate each other, and our organization’s successful comeback from some of the most challenging years we’ve all collectively encountered.” He signed “As always, Magic First!”

The theater is just gorgeous, old Hollywood look of elegance.  The main staircase with those beautiful columns lit up!  There was a bar at each entrance with a buffet style food service and seafood, chicken slider, beef sticks and a couple of different types of side salads. Very delicious food as well as hors d’oeuvres for those coming into the theater.

The MC (emcee) of the night was Michael Carbonaro, a well-known magician, who adds a comedic element to his show.  Boy was he funny and a fantastic dresser too!  Michael also was part of the entertainment and was joined by Princess Brunhilda, who once onstage was blindfolded and had to tell the audience what Michael was holding from things he obtained from the audience members. Hilarious indeed.

Here are wonderful photos of the invited guest before the show from Taylor Wong, Photographer | The Academy of Magical Arts, Inc.  Enjoy!

The Awards were as follows:

Special Fellowship to Gloria Dea (who is 100 years Young!)

Awards of Merit to Shoot Ogawa and Simon Coronel

About The Magic Castle

The Beloved Clubhouse began its life as a beautiful, private home built in 1909 by Rollin and Katherine Lane. Rollin was a very successful lawyer, banker and real estate investor who helped build Hollywood through property development and participation on the historic Hollywood Board of Trade. He also invested heavily in the early development of the nearby San Fernando Valley and in California’s San Joaquin Valley, helping to make it one of the most agriculturally productive areas in the United States.

His wife Katherine was a college graduate, published author, teacher and lecturer who worked to improve the quality of life in Hollywood through various community service organizations, even serving a term as president of the Woman’s Club of Hollywood. Later, working with the Los Angeles Chamber of Commerce and supported by a small army of volunteers, she promoted the planting of the landmark palm trees that line Wilshire Blvd., as well as hundreds of Japanese cherry trees in and around Griffith Park.

Together, Rollin and Katherine supported the fine arts, local artists, civic improvement projects and made sizable donations to schools and charities.

The Lanes named their home “Holly Chateau” and for thirty years, it was one of the most recognized addresses in Hollywood and a popular location for the area’s social elite. Hundreds of newspaper articles attest to the elegant and elaborate luncheons, teas and musicales held for artists, orphans, community leaders or world travelers, or to raise funds for one of Katherine’s many civic projects.

After the Lanes passed away in the 1940’s, the mansion was divided into a multi-family home. It then became a home for the elderly and was finally transformed into a maze of small apartments. By 1960, the fate of the Mansion was uncertain. Then Milt Larsen met the owner, Thomas O. Glover.

Milt was a writer on the NBC-TV show Truth or Consequences. His office was on the ninth floor of a Hollywood office building that overlooked the Lane mansion. Milt’s late father, William W. Larsen Sr., was a renowned magician and had long dreamed of building an elegant private clubhouse for magicians.

The Lane mansion would become that club. In September 1961, Milt, his brother Bill (an accomplished magician, publisher of Genii Magazine and the Academy’s first President), Irene (Bill’s wife) and a crew of eternally generous friends and volunteers began the extraordinary task of returning this run-down apartment building to its glorious past. After months of scraping and sanding, the rich Victorian elegance began to resurface.

The Magic Castle opened its doors at 5 p.m. on January 2, 1963. Today, more than five decades later, the Castle remains the mecca of magic as the world-famous home to the Academy of Magical Arts, Inc. and invited guests.

About The Academy of Magical Arts

The organization promotes the art of magic, encourages fellowship and maintains the highest ethical standards. We provide a friendly, inspiring environment where members and their guests can enjoy the art and each other’s company. Our goals are to advance the art and promote a positive image of magic and magicians worldwide.

The members are proud to be part of an internationally recognized organization that advances the art and develops new ways of stimulating interest in magic. Among their most beloved efforts is The Magic Castle, their home, and the most unique private clubhouse in the world.

About The Avalon Theater

AVALON is a historic live entertainment venue and special event facility located at the world-famous intersection of Hollywood and Vine. Built in 1927, the venue has been thoughtfully restored and thoroughly maintained over the years and features state-of-the-art sound, lighting and visuals.