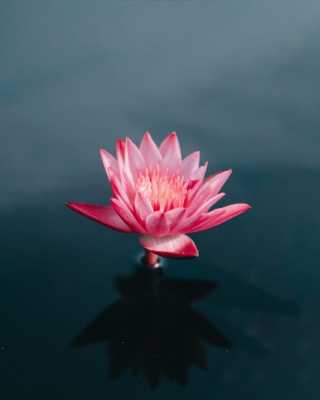 Los Angeles, CA (The Hollywood Times) 4/10/19 – The lotus flower is one of the most remarkable creations in nature. Its beauty lies in its purity, because this magnificent flower emerges from the bottom of a pond, yet rises above its muddy depths to become a thing of beauty, signifying spiritual elevation and growth.

The lotus flower is known from the fossil record to have existed between 145.5 million years and 65.5 million years. At that time, it existed throughout the world. As the Earth cooled and dried the flower’s habitat shrank significantly. It is an indigene of the Old World, and can be found growing from Iran in the west to Japan in the east. In terms of how far north and south it’s found, it grows in Kashmir, India, as well as far south as Queensland, Australia. There’s even a hardy species of lotus, scientifically named Nelumbo komavorii, which can be found in Vladivostok, Russia.

Ancient Egypt is the earliest-known civilization to have revered the lotus flower symbolizing various things, such as fertility, birth and purity.  As Seshen, the lotus flower also represented the sun, as it blossoms at sunrise and closes as the sun goes down. It is also associated with death. The Egyptian Book of the Dead states that a person who has died can be transformed into a lotus with the help of magic spells and charms, symbolizing resurrection and rebirth. It is thought to have arrived in Egypt from India in the 6th Century BC – along one of the ancient trade routes. It flourished along the banks of the Nile River, and was later cultivated by the Ancient Greeks, the Phoenicians and Romans.

The lotus is also considered an embodiment of perfection in various Asian religions, with particular reference to Buddhism and Hinduism. Its unique quality is said to symbolize the human who rises from the darkness of the world into a new way of thinking and living. In addition to their religious significance, they also have various uses in the modern world.

In the Buddhist tradition, the flower that rises above the muddy waters represents the act of ascending above all desires and attachments. According to Buddhism, this is the key to achieving spiritual enlightenment.  The lotus, therefore, symbolizes the journey from darkness to the light of knowledge or wisdom.

In the Hindu tradition, the place in which the lotus flower blossoms (it’s dark and dirty waters) represents a wise and spiritually enlightened person, who performs their duty without any material or emotional desires. The ability to detach oneself from such desires enables one to remain unaffected by all worldly pleasures and gain, thus achieving spiritual perfection. At its center, the lotus bud is compared to a folded heart or soul, which has the ability to blossom or awaken to divine truth.

The lotus predominantly comes in five different colors, and each has its own spiritual interpretation.

This enchanting flower is the most revered in the world and is often referred to as the ‘womb of the world’. It is said to denote purity of mind, the calmness and serenity of human nature and spiritual perfection.

The delicate pink lotus is associated with the highest deities across cultures and is said to represent the earthly symbol of Buddha. It is also believed to denote the state of a person’s mind – a closed bud represents a transition phase towards the path of spirituality, while a full-bloom pink lotus denotes enlightenment. This interpretation explains why quite a number of Hindu gods and goddesses, as well as the Buddha, are often depicted seated on a pink lotus.

This enchanting lotus signifies wisdom and knowledge, and represents victory over the senses. It holds a special and sacred place in Ancient Egyptian culture, and is rarely found. The blue lotus depicts a person’s control over their mind and spirit, enabling them to let go of the materialistic aspirations in life.

This mystical flower is associated with esoteric sects, and can be depicted as either an open flower or a bud. The eight petals of the purple lotus are representatives of the noble eight-fold path – one of the principal teachings of the Buddha. Following this path is thought to lead to self awakening.

“Just like the lotus we too have the ability to rise from the mud, bloom out of the darkness and radiate into the world.”