Los Angeles, CA (The Hollywood Times) 12/21/21 – It might be an understatement to say how challenging are the novels of Elena Ferrante, the mysterious Italian writer from Naples who no one seems to have ever actually seen. But actor Maggie Gyllenhall dove into Ferrante’s novella The Lost Daughter (USA, 2021) to make her directorial debut with a film based on Ferrante’s The Story of the Lost Child. The Lost Daughter is part of Ferrante’s four-book series of Neapolitan Novels, which are her most widely known novels. The series consists of My Brilliant Friend (2012), The Story of a New Name (2013), Those Who Leave And Those Who Stay (2014), and The Story of the Lost Child (2015), which was nominated for the Strega Prize, an Italian literary award. The fourth book of Ferrante’s Neapolitan quartet, The Story of the Lost Child, appeared on The New York Times‘ 10 Best Books of 2015.

Her first novel after finishing the quartet, The Lying Life of Adults, was translated into English by Ann Goldstein and played with the stereotypical teenage-girl-coming-of-age structure. Currently Netflix is in pre-production for a new TV movie based on The Lying Life of Adults.  Several of Ferrante’s novels have been turned into films. Troubling Love (L’amore molesto) became the feature film Nasty Love directed by Mario Martone, while The Days of Abandonment (I giorni dell’abbandono) became a film of the same title directed by Roberto Faenza.

Adapted from Elena Ferrante’s novel The Story of the Lost Child, the film is surprisingly disconcerting, demanding to be viewed through sharp eyes. In her feature directorial debut, Maggie Gyllenhaal (who also wrote the screenplay) oozes confidence in her storytelling ability, deftly handling the film’s layered plot and characters. The Lost Daughter explores motherhood and the conflicted, complex emotions that are buried and surface for the women in the role. Nuanced, thoughtful, and deeply effective, Gyllenhaal’s movie is assuredly executed, uplifted by a strong, striking performance by Olivia Colman.

Colman is the center of this absorbingly shaped psychological drama, built around a single traumatizing event from which the action unfolds. It takes place partly in the present and also in the lead character’s remembered past, triggered by a calamity that she witnesses and in which she decides, insidiously, to participate. These scenes aren’t simply flashbacks; they have their own relevance and urgency which run alongside the immediate action.

The story follows Leda (Colman), an English professor and Italian literature translator on holiday in a small Greek beach town on the island of Spetses (shifted to Greece from the original Italian setting). A mother of two daughters, Bianca and Martha, Leda is enjoying quiet time while she works, but it isn’t long before her peace is interrupted by a large, loud family from Queens who are vacationing at their family home. Leda’s eyes are immediately drawn to Nina (Dakota Johnson), a young mother who struggles to keep her daughter calm, happy, and occupied. After witnessing a fight between Nina and her controlling husband Toni (Oliver Jackson-Cohen), Leda helps the family find Nina’s daughter, triggering memories from Leda’s time as a young mother (Jessie Buckley) decades prior. The plot thickens when it’s revealed the doll Nina’s daughter can’t live without was taken by Leda.

The Lost Daughter works because it’s observational – no matter how the tensions rise the longer Leda has the doll and no matter how many more details are given about Leda’s past actions as a mother, Gyllenhaal’s aim isn’t to judge. How to feel about everything that unfolds is up to the audience to decide, which makes the drama all the more gripping and somewhat morally ambiguous. There is no right or wrong here, only what is and isn’t. 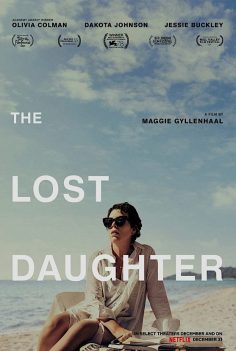 The quiet backdrop of the Greek beach city adds an interesting context for both Leda’s inner dialogue and the viewer’s perception. Cinematographer Hélène Louvart (whose credits include two episodes of HBO’s Ferrante adaptation “My Brilliant Friend”) creates a landscape that matches the stillness of the town to the self-analysis and growing disenchantment – and guilt – of the characters. It’s always a subtle push; the slow tranquility of the surf turns thrashing in parallel to Leda’s own attempts to free herself from her self-induced punishments.