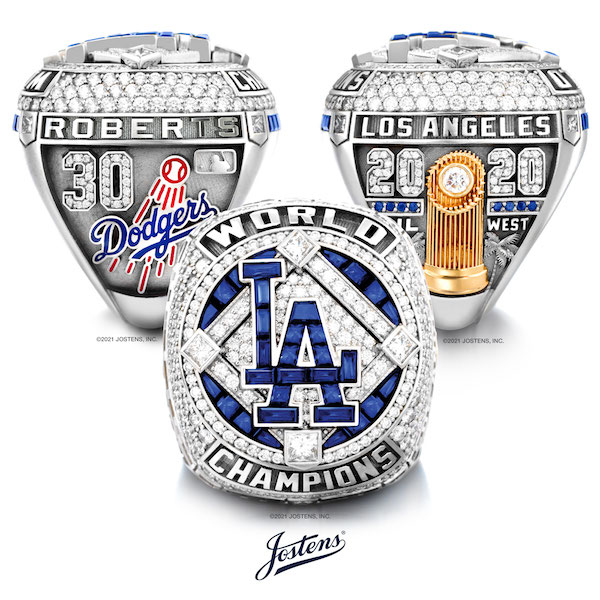 Los Angeles, CA, (The Hollywood Times) 4/9/2021–“The Dodgers organization has an incredibly rich championship history, and to be a part of that is truly a privilege. This ring celebrates the Dodgers’ relentless determination and success that ultimately lead to their 2020 World Series win,” said Chris Poitras VP and COO of Jostens Professional Sports Division.

What a great day in Dodger baseball history. The Boys in Blue not only got to play in front of a live audience, but they also got to share the well-deserved honor of receiving their 2020 World Series Championship rings moments before the season’s first home game.

The 2020 World Series Championship Ring was unveiled Friday afternoon by the Los Angeles Dodgers and Jostens, the market pioneer, and provider of custom, hand-crafted fine jewelry for professional sports teams. Prior to the Dodgers’ home opener, coaches and players were presented with rings on the field at Dodger Stadium.

“For 32 years Los Angeles waited for this moment, this team and this ring – and all that it represents. Jostens did a spectacular job designing these rings which represent the sacrifice, determination, and fortitude demonstrated by our players, coaches and entire organization to win a championship while overcoming unprecedented challenges,” said Stan Kasten, Dodger President, and CEO. “We are so proud of this team and thrilled to have presented them with their rings today in front of the best fans in baseball.”

The 2020 World Series Ring for the Los Angeles Dodgers is a beautiful piece of artistry. It’s made of 14-karat white and yellow gold, with sapphires and diamonds.

The Top of the Ring

The ring top is set atop a beautiful baseball diamond and features the immediately identifiable LA logo made from 17 custom-cut genuine sapphires.
Specific princess-cut diamonds accent 1st, 2nd, and 3rd base and Home Plate, and 16 sparkling pavé-set diamonds are set within the base paths.

The baseball diamond’s interior
An extra 29 diamonds fill the interior of the baseball diamond, representing the number of home runs struck by the Dodgers in the postseason bubble in Arlington, Texas. The logo and baseball diamond are surrounded by another 16 custom-cut sapphires and a halo of 44 diamonds.
The Dodgers’ well-deserved title as World Champions is adorning the top and bottom of the ring top.

The recipient’s name is engraved on the left side of the ring, above their diamond-encrusted uniform number.
In the middle is a red and blue ceramic Dodger logo, which is joined in the upper right corner by the Major League Baseball logo.

The right side of the ring is highlighted by a brilliant yellow-gold Commissioner’s Trophy with a single diamond.
The championship year, 2020, is set with 36 diamonds and surrounded by eight round sapphires, representing the Dodgers’ eight straight NL West division titles from 2013 to 2020.
The words “Los Angeles” are used as a nod to the club’s home in Southern California and palm tree images adorn the top and bottom of the right side of the ring.

Inside of the ring

The ring’s interior is personalized with the players’ signatures, as well as a blue enamel LA logo and the Dodgers’ postseason series results. The Los Angeles Dodgers logo is also emblazoned on the exterior palm.
There are approximately 222 round diamonds, 10 princess-cut diamonds, 45 custom-cut genuine sapphires, and 8 round genuine sapphires in the Los Angeles Dodgers 2020 World Series Ring.
The rings have a total carat weight of 11.0 carats, making them absolutely World Champions-worthy.

Dodgers fans can capture their piece of the World Series and commemorate this exciting moment in franchise history through a selection of customized fine jewelry and championship collectibles.
All pieces in this collection are inspired by the Dodgers official Championship Ring and are available now for a limited time by ordering online at: www.jostens.com/dodgers