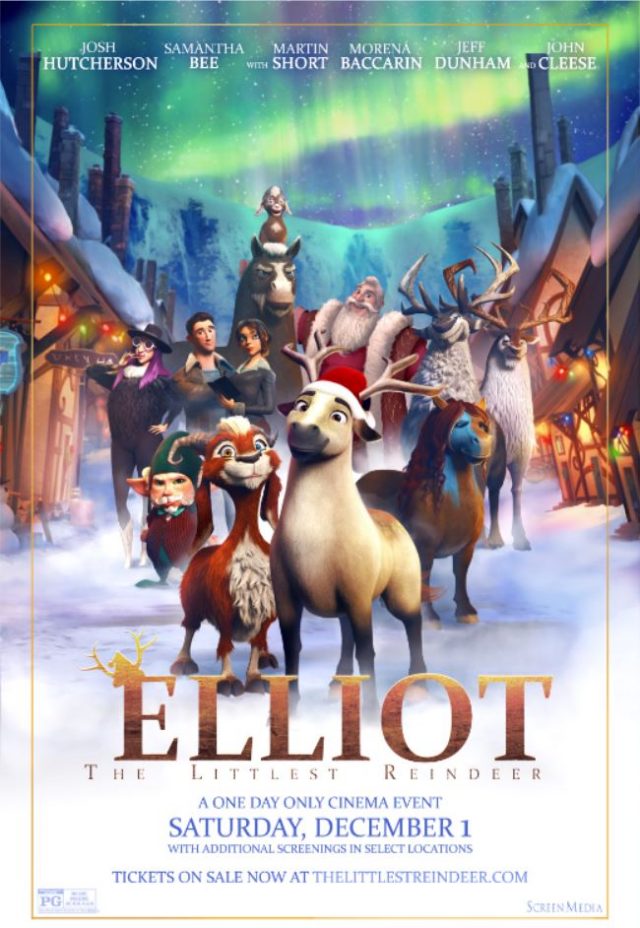 The skinny of the story is Elliot, a small but determined miniature horse, travels to the North Pole to compete for a spot alongside the famous reindeer that pull Santa’s sleigh. Blitzen announces his retirement on December 21st and Elliot has 3 days to fulfill his lifelong dream of earning a spot on Santa’s team at the North Pole try-outs.

Against all odds, Elliot and his friend Hazel the goat set out to prove that no dream is too big when you believe in yourself. The film doesn’t appear to be one to give other studios a run for their money – it’s quaint, a bit dark but steady – yet predictably cute. It probably won’t resonate with an older audience and seems geared towards the wee ones – which is a loss for those of us who love Christmas films with rich characterizations that stay with us through our adulthood.

With Christmas drawing nearer, Santa (George Buza) finds himself in a tough spot when Blitzen unexpectedly retires. Leaving his reindeer team one reindeer short, Santa has to hold try-outs in the North Pole to find a replacement. Little horse Elliot (Josh Hutcherson) believes that he is the right choice for the job and with the help of his friend Hazel (Samantha Bee), a perky goat, he sets about to prove his worth unaware that something sinister is going on back at his ranch.

Essentially The Littlest Reindeer is a film about overcoming the odds, which is a lesson that feels as important today as it ever has but it’s not a great replacement for the classics that dominate holiday time and it could’ve been.

Samantha Bee’s, Hazel the goat and Elliot’s best friend, is the prominent character in the film with her energetic infusion and will make you laugh. Elliot is endearing but as the main character he lacks what Hazel gives us – more entertainment value. Since it’s their relationship that the film hangs on – it works and they connect but the deeper emotionality of it again, doesn’t play to a wider audience.

While the try-outs happen at the North Pole a creepy, evil woman is left behind at the ranch and puts the animals left behind at risk of death. Odd plot point to put in an otherwise mildly temperate film and it seems out of place for such a young audience – so an adult with a small child to explain why this is interjected could be important.

Nothing original here but, nonetheless, it makes for an alternative for parents to keep the young ones busy during the holiday and the best lesson of course can’t be said enough this time in history – not to give up no matter what.