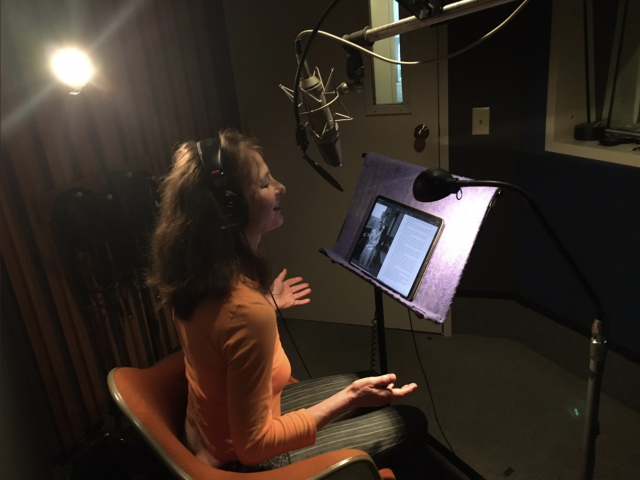 Los Angeles, California (The Hollywood Times) 2/2/2021 – Beata Pozniak brings Stefania Podgorska’s voice to life in the audiobook version of “The Light in Hidden Places.” Narrated by the Polish actress and long-time friend of the heroine Stefania, Pozniak also received an Earphones Award for narrating the recent Nobel Prize-Winning author Olga Tokarczuk’s Drive Your Plow Over the Bones of the Dead for Random House Audio. Pozniak says, “Receiving this kind of award is a very special honor for me, not long ago it would have been unthinkable to cast a female narrator for whom English was a second language. This award is proof that in the immortal words of Bob Dylan, ‘The times they are a-changin.’”

2020 has been a whirlwind for you with many award-winning voice-overs. Share the best moments.

There were a few great moments. The first one was when I was able to create a home studio during the lockdown. When film & TV productions were stopped, suddenly many actors had no work, it got scary. I started worrying, but then I found a very very old mic from my old student days when I was taking some singing lessons. It was so old that I wasn’t sure that it would even work but somehow it did. I took a hanger made out of wire and created a pop screen. I bent it in a way so that I could twist it into the shape of a circle, then pulled a pantyhose over it, and voila! The pop screen was made. I brought it into my closet, placed some blankets around it, and started to rearrange my clothes so that the fabric would absorb the sounds that I make. I eliminated any flat surfaces, tested the sound again, then recorded some voice samples. I looked around at my creative mess in my closet, took a deep breath, and realized that I could possibly survive this pandemic by narrating audiobooks. I kept rearranging things so that I could find the right feeling and comfort of a home studio. And that is how I started recording audiobooks like “A Wolf for a Spell,” a children’s book retelling the story of Baba Yaga, or “Bending Towards the Sun,” a mother-daughter Holocaust story. During these unprecedented times, another unprecedented thing happened. I learned that not only had I won an Earphones Award for narrating “The Light in Hidden Places” but also got nominated for not one (which is a huge honor in itself already) but three Voice Arts Awards categories for Best Narration/Voiceover. The ceremony took place in New York just before the Holidays. No one flew out to NY because of the pandemic. In the audience was only the tech crew. The celebrity presenters like George Lucas were tuning in online while the singers, performers, and presenters, local to NY, were participating live. When a presenter opened the envelope and read my name as the winner for voicing Skarlet (“Mortal Kombat 11”) in the Outstanding Video Game Character Best Performance, I thought this is all just surreal. I was speechless. In the history of almost 30 years of Mortal Kombat’s franchise, this is the first nomination or win for any voice actor. Truly unprecedented.
What does it take to be a successful foreign-born voice-over artist?
Growing up in Eastern Europe and immigrating to the United States at age 25 was a challenge because first I had to learn the English language. It is very different when you arrive in a foreign country at age 5 or even 15. You still go through the school system and learn English. Arriving in the US, I was an adult, but with a Masters Degree. I was always fascinated with techniques and studied Jerzy Grotowski’s methods, as well as Veronica Sherbourne’s, Roy Hart’s, and Alfred Wolfshon’s. There are many paths and I knew I had to find my own. It was hard work and still is, but there is undeniably a lot of joy in finding new possibilities.

Tell us about “The Light in Hidden Places.” Why was this book important to you?

Advertisement
In 1994 I brought an idea to Congresswoman Maxine Waters to introduce a bill in Congress to officially celebrate International Women’s Day in the US. I was promoting women’s rights and brought in Stefania Podgorska, who was an extraordinary example of heroism, risking her life by saving others. I knew her for over twenty years. We were born in the same country, spoke the same language, and also came to America for a better life. After her passing, I found out that Scholastic is coming out with a book about her. Then I got the offer to be her voice. I get chills when I even think of it. I channeled Stefania. She must have arranged all this from above. I am thrilled that Reese Witherspoon selected “The Light in Hidden Places” as part of her Book Club must-reads. Having someone powerful like Reese bringing attention to this story will help Stefania’s legacy live on and will inspire generations.
Who have you enjoyed working with?
An endless list of beautiful souls, but in the film for sure Gary Oldman, who is a Genius actor, Genius with a capital G. A true chameleon. There is no one like him. I was really campaigning and rooting for him to get an Oscar for playing Churchill, and was relieved when he did. He is very deserving and is extremely dedicated to his craft. I was fortunate to play his wife, Marina Oswald in Oliver Stone’s “JFK”. Such a giving performer. I also enjoyed working with Oliver Stone. There was this intensity about him that I found inspiring. He is intensely focused and working with him was fascinating. He gives his actors a lot of freedom in suggesting ideas. He co-creates with them. A great listener and observer.
From the audiobook world, it has to be producer Paul Gagne at Scholastic. I have never seen anyone like him as dedicated as he was, pushing for me to narrate “The Light in Hidden Places.” He believed in me, had a clear vision for me to narrate it. Before, you would have had an audiobook about the Holocaust in Poland read by a reader with a standard American English accent or a Queen’s English accent. Now, thanks to producers like Paul Gagne or Janet Stark at Random House, they fight for authenticity. These producers are committed to inclusivity and diversity. They search for us immigrants that have similar experiences or backgrounds as the story and characters. For audiobook directors, I really love working with director Christina Rooney. She brings not only her vast experience and professionalism but some kind of magic that happens in the studio. I’ll never forget at the end of narrating Drive Your Plow Over the Bones of the Dead when she asked me “Is there anything else that you would like to try or do another way?” And I just winked and asked if I could read the whole book again! She laughed because she knew that we both love what we do. We have great chemistry. I was in disbelief when I received my first Earphones Award for narrating that book. A few weeks later, the author won a Nobel Prize in Literature. I was so proud.

Since I am really taking the global situation seriously by staying safely at home, I decided to do a personal project. My relative in Poland passed away and always wanted to publish her poems but never did. Like most of us, we get distracted or we think we might not be good enough and say “One day I’ll do it…” Sadly that day never came for her, so I put together her poetry and created an audiobook from her works that will be released by Blackstone Publishing on February 23, 2021. It is called “Chwile zamyslenia” which in Polish means “Moments of Reflection.” It is a meditation through poetry on how we often get distracted from the things that really matter. Barbara Bukowska dreamed of being a writer for most of her life. But as with many people, she neglected her calling because she never felt she was good enough. This collection of poems is a personal journey of discovering her own long-hidden powers of expression. Written near the end of her life, the poems recall memories of the place in a manner reminiscent of the attics of Bachelard or the reveries of Proust. Bukowska recalls her childhood and the wondrous times spent with her grandfather in Mrzygłód and Sanok, Poland. Memories of the old house filled with the special fragrance of a particularly beautiful linden tree standing nearby give rise to acknowledgments of loneliness and longing. The silence of time is another strong theme for Bukowska that echoes throughout her poems. For anyone who has ever wondered about the meaning of what we leave behind, this book is a gentle reminder that everything matters if we just pay attention.