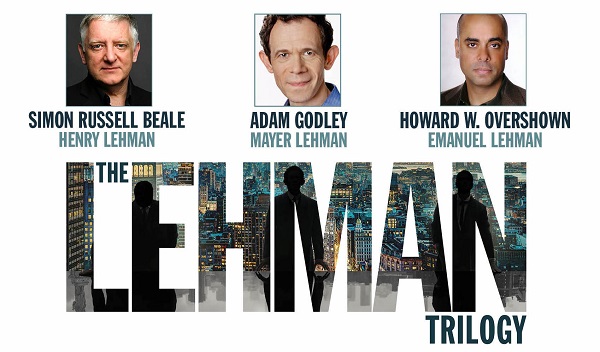 The Center Theatre Group presents an undeniable revelation of virtuoso performances and masterful direction. The audience beholds an archeological excavation of American finance.

There is an argument to be made that the story of the Lehman Brothers encompasses the mythology of the rise and fall of the American Dream. It is so much more than the story of a family of Jewish immigrants. From the emigration of Henry Lehman from Bavaria in 1844 to the bankruptcy of Lehman Brothers, the fourth-largest investment services firm, in the financial crisis of 2008, The Lehman Trilogy covers a tremendous amount of historical ground.

As we watch the evolution of three generations of the fabled family, there is no doubt that we are beholding an archeological excavation not just of the roots of the stock market but also the very essence of the American dream. Comparative to the brilliance of Tony Kushner’s Angels in America, here is a play that truly justifies a run time of over three hours. Such a justification is based on the vast territory, both historical and emotional, the play covers and the simple fact that it is nothing less than a modern-day masterpiece.

Put on by the Center Theatre Group and running until the tenth of April at the Ahmanson Theatre, this version of the play is the brainchild of Oscar-winning director Sam Mendes and writer Ben Power. With brilliant scenic design by Es Devlin of a rotating stage of glass-enclosed offices, the adaptation by Ben Power of Stefano Massini’s Italian original is flawless. Rather than feel like a translation, Ben Power turned the five-hour Italian original that reads like an epic poem into something entirely new. Thus, his version, developed in conjunction with Sam Mendes, comes across as a perfect match to the rhythms and flows of American dialects. These dialects range from an amused Southern drawl to the snobbery of Manhattan entitlement.

The play’s energy, drive, enthusiasm, and desire match the power of the American financial dream of success. Indeed, there is a deep-seated belief that the growth of capital will never end, growing ever more prominent with each generation. Nevertheless, the tragic flaw of a boundless ambition where capital overtakes humanity lies at the story’s core. Despite the family’s hard work and brilliant innovation, their creations always placed the human element a distant second to the desire for a better profit margin.

Over 300 words into this review, I feel almost like I have done the play an injustice because I have yet to mention the virtuoso performances of the three actors. Rather than focus on the bevy of characters they each capture with exquisite precision, we shall identify them as the three brothers who defined the financial dream initially. Whether talking about Simon Russel Beale as the oldest brother Henry Lehman, Howard W. Overshown as middle brother Emanuel Lehman, or Adam Godley as youngest brother Mayer Lehman, the accolades are identical.

Ultimately, what makes The Lehman Trilogy such an incredible success is how well the three actors work together and keep up with one another. Although they play men and boys, women and girls, there is not a hint of overacting on the stage. Instead, their performances are characterized by the precision of small gestures that manage to be read even in a large theatre. Together, they bring out the very best in each other, keeping the audience engaged from beginning to end. Yes, just over three hours is a long runtime, but every minute feels essential.

Although the English version of the play is the brainchild of Sam Mendes, the acclaimed director is quick to point out that the achievement was a team effort. Describing the process of creating such a complex and precise work, Sam Medes explains, “The Lehman Trilogy was developed over three years without the constraint of a schedule, or even a plan — it was allowed time to find its form, and to build a wonderful team with which to make it. One of the chief joys has been to work across borders with two great writers, and to invite three of the finest actors of their generation to work with us.” There is no doubt that such artistic collaboration continues to be on full display in the latest iteration of the play at the Ahmanson Theatre. Indeed, every aspect flows together to create a whole that excavates the financial dream of boundless success that led to the innovative triumph of the stock market and the modern American empire. However, the tragic flaw at the heart of this same dream, the dreaded bottom line before all else, might also lead to our eventual downfall.