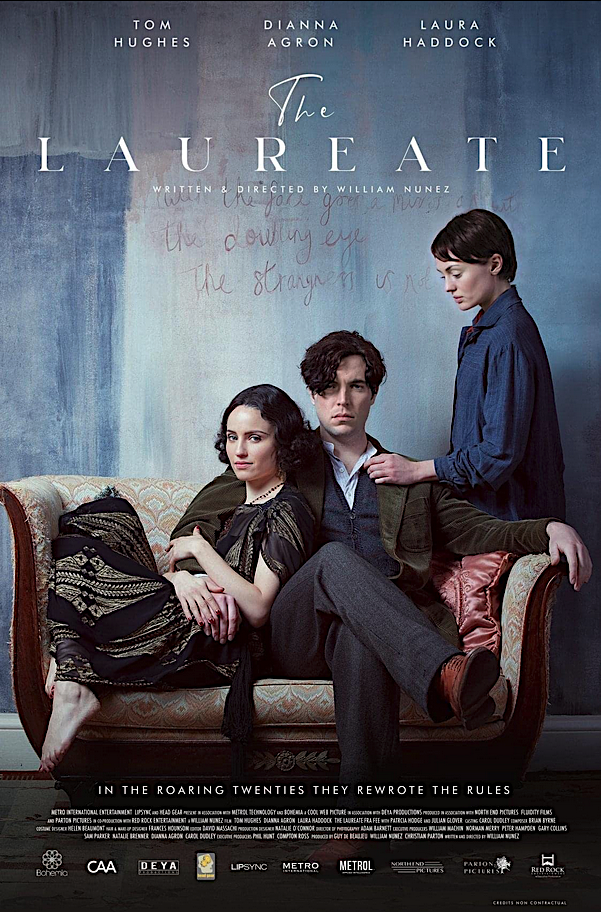 Los Angeles, CA (The Hollywood Times) 1/23/22 – Screening this week at CineLounge in Hollywood is a new feature film entitled The Laureate (2022), directed by William Nunez. Set in the mid-1920s in England, celebrated poet and writer Robert Graves returns from the trenches of World War I traumatized and creatively struggling. It takes young poet Laura Riding to reignite Robert’s passion, and with the blessing of wife Nancy, his muse becomes his lover. With the three of them sharing a life, Laura’s attention soon turns to Nancy, and their complicated relationship threatens to risk everything they have. The film takes its title from a dark poem by Robert Graves, “The Laureate” which encapsulates his somewhat morbid fascination with death. That is probably befitting a man who barely survived the Battle of the Somme in July 1916 – the bloodiest and deadliest battle of World War I. British troops sustained 420,000 casualties – including 125,000 deaths – during the Battle of the Somme. The casualties also included 200,000 French troops and 500,000 German soldiers. I wish to thank CineLounge and publicist Phil Sokoloff in arranging for a special screening of The Laureate.

Biopics are never easy to make and films about real-life writers that barely bother to reckon with their actual writing. Robert Graves was a most productive writer throughout his long career, as a list of his published work exceeded a hundred volumes. But the version of Graves on display in The Laureate, a fictionalized treatment of the unusual living arrangement Graves had between 1924 and 1929, bears only the most superficial resemblance to the actual writer. Most of us are not familiar with his poetry – which came to the notice of the public beginning in 1917 as one of the most famous “war poets” – along with Winfred Owen, Siegfried Sassoon, David Jones and Edmund Blunden. Graves is better known for his early autobiography Goodbye to All That, which he finally wrote and published in 1929. English majors and fans of Joseph Campbell are probably familiar with Graves’ work on Greek & Roman mythology as well as Celtic lore – reflected in his poetic study The White Goddess. Of course, film buffs know of Robert Graves as the writer of his series of Cladius novels, which became major films later.

In The Laureate, written and directed by William Nunez, Robert Graves is still very much a post-war poet, and still riven by PTSD (“shellshock”) from his injuries suffered at the Battle of the Somme. And with good reason; as we hear actor Tom Hughes as Graves recall in voice-over, he was wounded and left for dead in the Somme, one of the bloodiest battlefields of the war. Haunted by nightmares, jumpy at ringing telephones, the utterly humorless Graves here is seriously unproductive in the house he shares with his wife artist Nancy Nicholson (Laura Haddock) and their young daughter Catherine. This house, in Islip, well outside London, is appropriately called “World’s End.” In private life, Robert Graves had many romantic attachments, being bisexual. This film touches upon some of the male-male relationships but only in passing. The real focus is Graves’ relationship with Nancy Nicholson and poet Laura Riding.

On the bleaker side, there is the early poetry of Graves, like his poem “The Laureate”:

The line “It was no natural death but suicide” portends so much of how Graves saw his own life and career as a poet. He had been declared dead on the battlefield but managed to live.

For the sake of narrative coherence, perhaps, the movie hedges with respect to reality. Graves in this period was in fact extremely productive, with several poetry collections and critical studies under his belt; and he and Nancy had not one but four children. Nunez wants us to believe it’s a block that compels Graves to contact a New-York-based poet named Laura Riding, after reading her work. Riding was briefly married to an anthropology professor at Cornell but Riding hops over to England at the invitation of Robert Graves and his wife Nancy. Soon an initially platonic menage-a-trois comes into being. As played by Dianna Agron, Riding is aggressively coquettish. She resembles what smart aleck guys years later came to call (erroneously and condescendingly) a “lipstick feminist.” She gushes to Nancy and Robert that she just adores “Byron, Keats, and Shelley – Mary Shelley, that is!” This might seem as an appropriately bold thing for Riding to say. But in fact, Riding had a first-rate intellect and was quite a good theorist about literature and poetry in general.

In the narration that opens the movie, Haddock’s Nancy speaks of inviting a snake into the garden. Agron’s Riding does slither. In a party scene in London, she flounces about in a negligee like a flapper out of an Evelyn Waugh novel. She seduces Nancy and then Robert (with whom she has a less easy time), then pounces on young Dublin-born poet Geoffrey Phibbs (Fra Fee), with his crazy out-of-control Ezra-Pound-like hair. She just couldn’t get enough sex but flirted with danger as well. At one point she goads the Graves’ daughter into nearly walking out of a window. All the while looking very pleased with herself. The real Laura Riding was a complex individual and probably underrated as a writer and critic. In the film, she is portrayed as extremely melodramatic – which was part of her personality – but her importance as a literary muse for Graves should not be under-estimated.

Riding’s first collection of poetry, The Close Chaplet, was published in 1926, and during the following year she assumed the surname Riding. By this time the originality of her poetry was becoming ever more evident: Generally, she favored a distinctive form of free verse over conventional meters. She, Robert Graves and Nancy Nicholson lived in London until Riding’s suicide attempt in 1929 (which occurs near the film’s end). It is generally agreed that this episode was a major cause of the break-up of Graves’s first marriage: the whole affair caused a famous literary scandal.

When Riding met the Irish poet, Geoffrey Phibbs, in 1929, she invited him to join the household that already contained herself, Graves, and Graves’s wife, Nancy. Phibbs agreed, but after a few months changed his mind and returned to his wife. When they failed to effect a reconciliation, he rejoined the household but rejected Laura and moved in with Nancy. This was one of the catalysts for the incident of 27 April 1929, when Riding jumped from a fourth-floor window at the lodgings she shared with Graves, at the height of an argument involving Graves, Phibbs and Nancy Graves; having failed to stop her, Graves also jumped (from a lower floor), but was unharmed, whilst Riding sustained life-threatening injuries.

Following the break-up with Nancy, until the outbreak of the Spanish Civil War in 1936, Riding and Graves lived on the island of Majorca, where they were visited by writers and artists including James Reeves, Norman Carmeron, John Aldrige, Len Lye, Jacob Bronowski, and Honor Wyatt. The house is now a museum. Riding and Graves were highly productive from the start of their association, though after they moved to Majorca they became even more so. While still in London they had set up (1927) the Seizin Press, collaborated on A Survey of Modernist Poetry (1927) (which inspired William Empson to write Seven Types of Ambiguity and was in some respects the seed of the “New Criticism”).

As for the voluminous output of writing by Robert Graves, his poetry is under-appreciated and needs to be read again. Yes, he is more traditional, writing in iambic pentameter with end rhymes. But perhaps he should be seen as a modernism of a different sort than the course charted by T.S. Eliot and Ezra Pound in the same period of English language poetry. Graves’s first collection of poems, Fairies and Fusiliers, appeared in 1918, when he was still in his early twenties. This poem provided the volume with half its title: It is spoken by a pair of fusiliers who have been forever joined and bonded in macabre friendship through death, after they were killed in the war. The poem is one of Graves’s first published responses to the First World War, and acts as a prefiguring of his more famous prose work, Goodbye to All That.

One of Graves’s most popular poems, “The Cool Web” is about the web of language which humans are uniquely capable of using: Weaving a web of words, we can describe a whole host of experiences and sensations. As so often with Graves, the emphasis is on childhood development and experience: a feature which, among others, points up the influence of Romanticism on Graves’s artistic worldview. In the First World War, during the Battle of the Somme, Robert Graves was declared dead. He was, thankfully, still alive, and went on to live until 1985. After the end of the war, Graves published Fairies and Fusiliers, a collection of poems written during the war.

“Double Red Daisies” is a light poem about red daisies that is songlike, childlike, and a world away from the grim and tragic horrors symbolized by the red poppies of No Man’s Land. Opening with a stanza-long question about what it feels like to have your heart in your mouth when you love someone and long to kiss them, “The Kiss’ then proceeds to take a morbid turn, as the aptly named Graves associates this kiss not with love and life but with a dearth, and then death. This kiss is the kiss of death. One senses in this poem the homo-erotic desire of young Englishmen in the trenches during the war and the bonding in death.

Director William Nunez hails from Elizabeth, New Jersey. His previous work included the television series In the Loop with Betty Liu (2007) and the 14 episodes of The Beat with Ari Melber (2019).