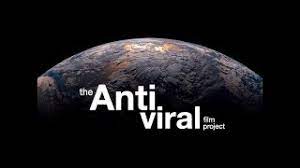 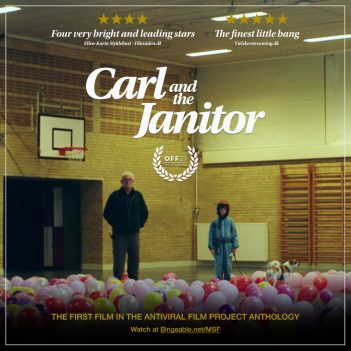 The AntiViral Film Project is projecting to complete a collage of 19 shorts made by 19 film crews from 19 global communities for 19 charities, leading to three films that will be produced in traditional fashion once self-isolation ends. The first film already shot and completed is Carl and the Janitor (22 min., 2021), which takes place in Denmark and captures the unlikely friendship of a 10-year old boy and the school janitor during the pandemic. It was funded by Doctors Without Borders and part of the money from the film is being used to pay-it-forward fund the next film project in the Antiviral Film Project. Sales of each film will be shared by a charity partner and funding the subsequent film in the anthology. Development of a film segment in Madrid is already complete with a cast including British acting veteran Sheila Hancock and Spain’s Gonzalo Ramos. “So many gestures of solidarity and generosity and I find it really touching… that’s why I wrote this piece because I want to explore what’s going on,” said Ramos. Other potential segments lined up include a story of rival gangs in the townships of Cape Town, South Africa, having joined together during the pandemic; the emergence of a rap music scene among the Mapuche Indians in Chile; and a Ugandan filmmaker who makes films on his own for Ethiopian Airlines. 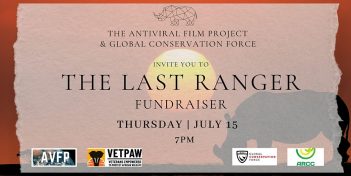 This fund-raising event hosted at the Bergamot Station last evening raised more than $20,000 at a live auction for the production costs of filming “The Last Ranger” at this event which featured American poet and TEDx speaker Sean Hill as program M.C. and music by the Senegalese music trio Da Djembe. Actor David S. Lee wrote the screenplay for “The Last Rhino” and gave an emotional account of how he personally witnessed the slaughter of rhinos by poachers at the Amakhala Game Reserve in the East Cape area of South Africa. This inspired him to write a story about how eco-tourism has dried up in much of Africa due to the COVID lockdown, leaving the game reserves unable to employ their rangers and allowing rhino poachers to more easily attack the endangered rhinos in the wild. Why is rhino poaching so common? It is because of the demand for rhino horns which are falsely pedaled around the world as a supplement for enhanced male virility – mainly sold in China and Vietnam where such folk medicinal beliefs unfortunately persist.

In Lee’s screenplay, a young Xhosa girl named Litha encounters the reality of rhino poaching in the Eastern Cape with a local game ranger, Khuselwa, who she accompanies on his work in the game reserve. When they encounter a party of poachers who have tranquilizes a mother rhino at the watering hole, Litha realizes that one of the poachers is her own father, who is complicit in cutting off the rhino’s horn with a chainsaw. Writer David S. Lee is a well-known actor originally from South Africa and has appeared in blockbuster films such as Get Smart, Geostorm and Black Panther. 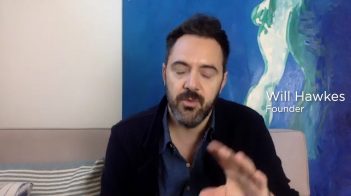 At this fund-raising event for “The Last Ranger,” Darwin Shaw and William Hawkes talked about they first met due to their creatively aligned interests and discovered that they had a similar international outlook. Darwin Shaw has acting credits on Casino Royale, Homeland and House of Cards while William Hawkes’ credits include Sun Valley, The Politician and R.V. Their partnership created Six Feet Films, with which they are overseeing the production of three films in this anthology of 19 projected films for the Antiviral Film Project.

To follow the journey and have donations to make this a reality and here’s where you can join/donate/follow or participate.
https://six-feet-films.com