A young American soldier in Afghanistan is disturbed by his commanding officer’s behavior and is faced with a moral dilemma. 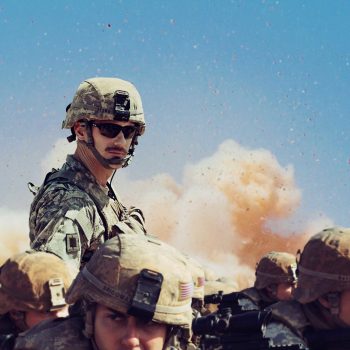 This is based on true events!

“The object of the superior man, is truth!”

But sometimes that truth comes at a cost. 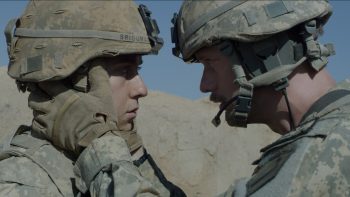 When Andrew Briggman (Nat Wolff), a young soldier in the US invasion of Afghanistan, witnesses other recruits killing innocent civilians under the direction of a sadistic leader, Sergeant Deeks (Alexander Skarsgård), he considers reporting them to higher-ups — but the heavily-armed, increasingly violent platoon becomes suspicious that someone in their ranks has turned on them, and Andrew begins to fear that he’ll be the next target.

From writer-director Dan Krauss, and based on the same events that inspired his award-winning 2013 documentary of the same name, The Kill Team is an urgent and explosive recounting of one of the darkest incidents in the not-so-distant history of American military exploits. 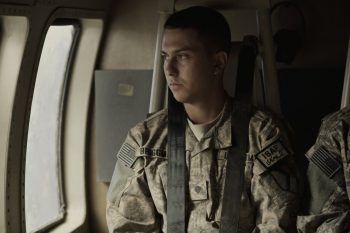 William Briggman (Rob Morrow) and Andrew (Nat Wolff) are having a smoke on the porch late at night.  Andy, Andrew Briggman actually, is ready to head off to war. Not just any war, but the longest war in American history.  These are just young kids…our future, our youth…doing security detail. A mindless job dealing with people whose language they don’t speak in a land they could care less about. But they need to learn things and they have zero clue on interpersonal skills. Based on true events… this is The Kill Team. 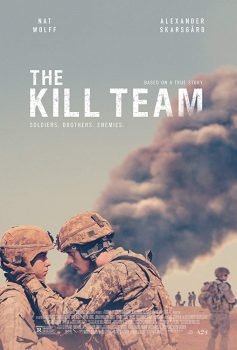 We are now at Forward Operating Base, Flintlock, Kahndahar Valley, 2009.  The platoon is assigned a new staff sergeant. A seasoned veteran of several tours, Sergeant Deeks offers them a way to make a difference and be a part of history instead of reading about it in books.

Briggman is offered a chance on how to inflict pain on a captured Afghani detainee by Deeks.  Briggman chooses to not to participate even though he hates what’s happened to the sergeant before Deeks who went home in a body bag from an IED.  Briggman begins to observe what his staff sergeant is doing and witnesses how the rest of the soldiers in his platoon are acting.  How they are turning more towards abuse, partying, smoking hashish and thinking that this is simply a game.

Briggman continues to observe.  He observes an Afghani embedded in his platoon as an interpreter doing nightly prayers.  He observes the senseless killing of what is apparently an innocent civilian. Deeks forces him to make a choice telling him that killing people is what we do and asks him if he has a problem with that.

In talking to a fellow soldier late at night about how it felt to kill that boy his platoonmate recounts a story about the “Conscience Round”. It was started in the 1800’s during firing squad executions because sometimes, the executioner would freeze up.  A group was then brought in instead of a single rifleman. Then a blank was put into one of the weapons.  No one knew which weapon held it that blank. Then, when the time came, it didn’t matter because it was the “group” doing the killing. At that point you could kill anyone.

Briggs now has a conscience. He can’t trust those in command. He can only trust one man, his father. A former Marine.  This is about being a whistleblower.  His staff sergeant calls him into his tent and makes sure that if he has any problems, Briggs should bring it to him. The abuse of a man in the in the platoon, who was a outed for reporting smoking hashish was, himself, beaten for being a whistleblower. Retaliation for doing that and being brave enough to stand up should never happen but it does more often than not.

Then Briggs witnesses something at the search of another home which reveals the truth about what’s really going on.  There’s a saying: The object of the superior man is truth, but that truth comes at a cost.  Briggs is now feeling the pressure, fear and then a test of loyalty.  Loyalty? Loyalty to whom or what?

As a US Navy Disabled Veteran, having served my country for 11 years, 8 months and 26 days, and a whistleblower while I was at the Pentagon from 1989 – 1991, I can relate to what Briggs went through, what he saw, and how he felt.

We service members of the United States Armed Services, swear our allegiance to the Constitution not to a single man, woman or group. We pledge to defend this country against all enemies, foreign and domestic. This film was heart-wrenching.  I lived through what happened during the Bush Administration and how we were thrown into the longest war in our country’s history. I remember the horrors of Abu Ghraib and how our “serviceman” decided that torture and abuse of prisoners of war was their decision to make and that it was “ok.”  That it was ‘funny’, fun and entertaining.

It was “ok” for the CIA and personnel of the United States Army to commit a series of human rights violations that included: physical and sexual abuse, torture, rape, sodomy and murder against detainees.  We the people needed to be told this story and we were and today, The Kill Team, is just one more chapter in the book of horrors of the United States in recent times.  WE ARE BARBARIC!  We are ‘not’ the shining beacon on the hill that former President Ronald Reagan said about our nation. We are just as guilty as those who we accuse of doing the same thing are!

Atrocities like this cannot be locked away in some secure place because like my late grandmother once told me, “The truth is like oil in water. It always comes to the top.”  If our leaders act in this way, then what example are they setting for their subordinates, hmm?  This received 100% on Rotten Tomatoes and it’s deserving of it.  There is more truth out there and one by one, whistleblower by whistleblower, the facts will come to light.

If you work in the government and you need to blow the whistle, like I have in my past, write the Senate Judiciary Committee’s office at: whistleblower@judiciary-rep.senate.gov or consider reporting waste, fraud, abuse, or mismanagement elsewhere as well, if you have not already done so.  Confidential, protected whistleblower disclosures can also be made to:

The Office of Special Counsel (https://osc.gov/pages/file-complaint.aspx)

The Office of the Inspector General for the Department of Justice (http://www.justice.gov/oig/hotline/)

The office of inspector general at another relevant agency (https://www.ignet.gov/contact-us).