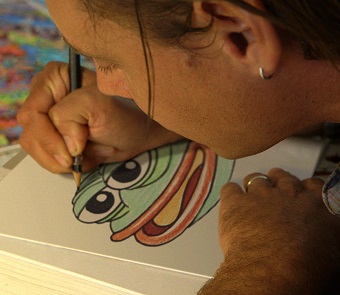 Los Angeles, CA (The Hollywood Times) 7/30/20 – Cartoonist Matt Furie was a nice kid who liked to draw frogs. On his artistic journey he stumbled onto a cute and cuddly character he dubbed Pepe (a juvenile euphemism for urination). He eventually built a story and cast of characters around Pepe–an animal house assemblage of friends who smoked dope, farted and peed pants on the toilet seat. He published his comics under the name Boy’s Club, cleverly lampooning a post-college youth culture that reflected the collective ennui of an entire generation. Pepe became an animated slacker icon in much the same way Robert Crumb’s Fritz the Cat had done a half-century before. Then things began to get weird.

Pepe and his “feels good man” meme began spreading like a wildfire throughout the internet. The meme “feels good man” became the “Where’s the beef?” of the early 21st Century. Paired with GIFs and thumbnails to describe all manner of humorous ephemera–cats weightlifting, Keanu Reeves–Pepe became a ubiquitous but harmless presence in cyberspace. Then 4chan came along. Things turned very dark from that point forward.

Pepe became the meme darling of 4chan, an anonymous web platform favored by losers, basement dwellers, misogynists and white supremacists. At first Matt Furie didn’t connect the dots that his cartoon character had become an internet icon. However, soon Pepe was inescapable. Initially, the notoriety was validating. However, Pepe soon became a Frankenstein monster beyond the control of its creator.

Initially, the 4chan Trollerazi repurposed Pepe as a gross, offensive, disgusting character to scare off the cool, popular kids (mainly females) who embraced Pepe as a cutesy-poo meme machine. However, when swastikas began to appear and Trump retweets hit the internet, Pepe morphed into a mascot for Alt-Right conspiracy kooks who saw a digital-age path to victory in the 2016 presidential election.

In the beginning, Matt Furie went along with his creation’s celebrity without claiming intellectual property infringement. However, when the Anti-Defamation League labeled Pepe a hate symbol, a depressed Furie retained legal counsel to reclaim his art from the bloviating bigot Alex Jones and others who misappropriated the image of Pepe. Furie prevailed but Pepe remained on the ADL’s shit list.

Feels Good Man is a riveting documentary that is hardly a ringing endorsement of humankind or Darwin’s theory of evolution, yet it refrains from being hopeless. It reaffirms the power of art and its unintended influence on mass culture.