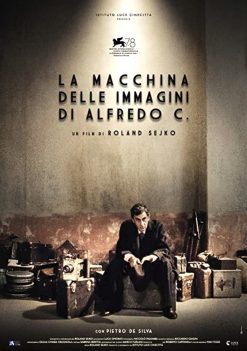 Los Angeles, CA (The Hollywood Times) 5/1/22 – Included in the lineup for this year’s SEE Fest of new films from South East Europe is a powerful Albanian documentary about the Italian invasion of Albania in April 1939, as directed by the Fascist government of Benito Mussolini. It screens on Sunday, May 1, 7:30 pm at the Lumiere Music Hall Theatre in Beverly Hills.As Fascist Italy occupied Albania in 1939, thousands of Italian workers, settlers and technicians were transferred to the country. When Albania was liberated in November 1944, the new Communist government under the leadership of Enver Hoxha closed the borders and placed dozens of conditions on Italy for repatriation of its citizens. A year later, 27,000 Italian veterans and civilians were still held in Albania. Among them was a cameraman, Alfredo Cecchetti, portrayed here in the film by actor Pietro De Silva). As part of the Fascist propaganda effort during World War II, he had been traveling around Albania shooting film for five years. That remarkable archival footage has been examined by filmmaker Roland Sejko and made into a fascinating film, entitled The Image Machine of Alfredo C. (La macchina delle immagini di Alfredo C., Italy, 2021), who attempts to chronicle the events in the life of Alfredo C. and his experiences as a cinematographer.

For almost two decades before 1939, Alfredo Cecchetti worked as a cameraman documenting the rise of the Fascist Party in Italy and its leader Il Duce, Benito Mussolini. Alfredo C. helped to immortalize the great machine of the Italian Fascist Regime – both in Italy covering countless public appearances of Mussolini and after 1939, the Italian invasion of Albania, as he followed the Italian troops and then filmed the new Italian settlers. Embedded in the archive are many films that were part of the Italian Fascist propaganda machine.

“How many Mussolini [appearances] I have filmed,” says Alfred C. We see Il Duce as an orator, holding a pickaxe and a thresher, swimming in a lake and horseback riding. Mussolini’s speeches were often shot from below with Il Duce on a platform or balcony, as if it were a subjective view of the crowd. Above all, the massive crowd itself was a necessary counter-field for the cult of the leader. In fact, there was one speech that could not be filmed because Mussolini chose to speak in the evening and the square was not lit enough. So, Alfredo C. reconstructed the crowd scenes in a theater, recruiting the workers of Luce as an imaginary crowd. In Albania, Alfredo C. was asked to document the “progress” of the Italian occupation of Albania and the projects of modernization and development from an Italian point of view. In the Press and Propaganda Office of Tirana at the time, there was an inscription that read: “Cinematography facilitates the work of Fascist penetration.”

As is well known, things didn’t go as Italian Fascists had hoped. The Albanian campaign that began in 1939 ended with 180,000 soldiers in 1944 and with over 20,000 dead. Supply lines from Italy failed to provide food and supplies and Italian soldiers were forced to hide up in the mountains and forage for food.  With the liberation of Albania in 1944, thousands of Italians were detained by the new Communist regime under Albanian leader Enver Hoxha. Among them also Alfredo C., who became an operator for the Albanian regime after having been an operator for the Fascist Luce. Now, being the only cameraman around, Alfredo was asked to work on behalf of Communist propaganda. Shut in his storeroom, surrounded by thousands of reels of film, Alfred watches watch he has shot again on an old Moviola. It is his film that we are watching. And perhaps, not his alone.

Traces of this strange Italian professional cinematographer were lost until director Roland Sejko, Albanian by birth, found them between Tirana and Rome. The resulting film, however, is not only the fictionalized story of Alfredo Cecchetti. It is also, and above all, a film about archival materials, their reuse and the relationship with memory:  This is why it should be seen by cinema lovers. Alfredo C. goes down to the basement where the old rolls of film and old projectors and editing machines are kept. No one seems to know why he goes down to look at these archival materials in this sort of substrata of a world where hundreds of reels are precariously placed in racks. There are so many that they often roll out and flood the warehouse. Alfredo C. (as played by Pietro Da Silva) feels a sense of urgency to review everything that moves him – an urgency that the images might reveal something unknown and fearful – perhaps an atrocity.

The film accompanies Alfredo’s story with images, poetic and dramatic at the same time, of the “washing” of the film to recover the silver salts. We really do sense the friability of celluloid images. While working on the film and carrying out the delicate editing operations on his Moviola editing machine, Alfredo C. (Pietro De Silva) seems to be wondering about his own role in history and to analyze the moral position of his camera. When we see the ancient ruins of the city of Butrint, Albania, sacked of precious works of art from the Graeco-Roman era, we feel discomfort. Likewise, we see the ranks of Italian soldiers occupying the territory and building roads to reach Greece. Alfredo C.’s pain becomes our pain when we see the image of Mount Golico which became the frozen tomb of thousands of Italian soldiers. When the snow melts in the spring, the skeletons will flow along the river as if in a painting of the Apocalypse.