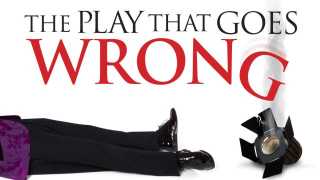 When the national tour of a madcap comedy delivers disaster upon disaster, a valued relief from the ugliness of everyday life descends upon a happy audience.

All Photos by Jeremy Daniel

Los Angeles, CA (The Hollywood Times) 06/11/2019 – In a day and age when the noise of an embattled country pollutes our lives, sometimes nothing is more important than to have a little fun. Offered up as a buffet of disaster by the Center Theatre Group at the Ahmanson Theatre, the madcap madness of the national tour of “The Play That Goes Wrong” delivers such relief.

Directed with precision by Mark Bell, the slapstick comedy written by Henry Lewis, Jonathan Sayer, and Henry Shields provides a temporary escape from the weight of reality. The combined efforts of the talented company transport the audience into an uproarious extravaganza that makes our world seem pretty sane in comparison.

What is so wonderful about “The Play That Goes Wrong” is this sense of hysterical desperation. Indeed, the cast of The Murder at Haversham Manor – the play within the play – will do just about anything to reach the end of the performance. Such a determined effort in the crazed face of constant pandemonium is what keeps the play moving forward, engaging the audience from beginning to end. It feels like Monty Python’s Flying Circus had a monstrous baby with Neil Simon’s Murder By Death. The incredible endurance and unconditional dedication of the cast within a cast when confronted by disaster after disaster is admirable, yet sad as well.

Will even a shred of their dignity be left intact by the end?

As the audience watches the unfolding of constant catastrophe, we begin to realize that we are not only an audience but participants in the process of the play’s realization. The witnessing of each disaster is crucial to the ongoing creation of the play within the play. In a rare fashion that proves entrancing, the cast within the cast needs the audience more than the audience needs them. They desperately want the audience to stay and support their efforts despite the extremity of their failures. Breaking the fourth wall, they plead for us to respect their efforts. Indeed, this desperate plea for our patience and maybe even for our love is a binding connection.

Even before the “official” start of the performance, as the audience is milling about and taking their seats, a haphazard sensation of the doom that is to come takes on a palpable presence in the theatre. After all, as the audience learns from the director (an indefatigable Evan Alexander Smith), who also stars as Inspector Carter in the murder mystery of the play within the play, the lack of actors in the drama society has led to serious issues in the past productions like “The Lion and the Wardrobe” and “Cat.” Since they have a full cast this time out, they desperately want everything to work.

Of course, nothing does. Indeed, going wrong evolves into an art form on stage.

Although the entire ensemble is impressive, working as the most perfectly dysfunctional unit that engenders comic moment after comic moment, there are some standouts. As the fabulous fictional Sandra Wilkinson, who plays Florence Haversham in the play within the play, Jamie Ann Romero builds the momentum of the first act with a baroque sexuality that captures the attention. Also, Ned Noyes stands out as the fictional and egotistical Max Bennett, who plays Cecil Haversham. Within the murder mystery, Bennett preens and primps, swelling himself before the audience in a self-congratulatory manner. More intrigued by his own success than anything else going on, he always seems to be on the verge of taking a bow, eternally amused by his own performance.

Almost part of the audience as fictional tech guy Trevor Watson, Brandon J. Ellis bumbles about the sound and lighting cues, often allowing his favorite songs from Duran Duran to invade the show. In the second act, when Trevor is called upon to assume a more interactive role in the murder mystery, his reluctance to join the chaotic proceedings makes him feel like an actual part of the audience. Empathizing with Trevor, the audience hopes he will somehow manage to survive this job and move on to better opportunities in the future. As a POV character, he widens the scope of the play within the play.

Legendary comedian Buster Keaton is reported to have said, “A comedian does funny things. A good comedian does things funny.” The success of “The Play That Goes Wrong” is the frenetic pace where the company does things funny, one after another after another, without stopping for a breath. The pacing of the comedy is this precise dance of utter chaos. There is a definitive realization that such insanity only can be accomplished on stage with the utmost precision and backbreaking work. In this case, however, the backbreaking comes pretty close to becoming a reality, and no doubt several chiropractors nationwide saw some added business during this national tour.

In the bright light of such an accomplishment, the cast and creators of “The Play That Goes Wrong” deserved the standing ovation they received in the end. After all, despite almost everything going wrong that could go wrong, they managed to get to the end with a smile, giving the audience the all-too-rare gift of a casual escape, lots of laughter, and true sense of relief from the stresses of the real world.