Washington, DC (The Hollywood Times) 10/27/16 – Just two weeks before a divisive national election that will greatly impact the future of LGBT rights, one might expect palpable stress at an HRC event. Yet if the DC politicos attending the event were carrying the weight of the election, it dissipated quickly. Chefs for Equality was a moment of unrepentant joy in the midst of election gloom, celebrating the artistry of D.C.’s foodie culture and the strength of D.C.’s LGBT community.

As guests descended the escalator into the ballroom foyer, a display of fantastical wedding cakes greeted them. This year marked HRC’s 5th annual Chef’s for Equality event, and the second in which one of those cakes could grace the table of a same-sex couple getting married with full legal rights.

“There is a whole new market [for wedding cakes] now!” Chef Brett, instructor at Stratford University School of Culinary Arts, exclaimed. He and his husband married in D.C. after DOMA was struck down. “That week at the courthouse, it was incredible. Every couple was a same sex couple”.

With so many artisanal cocktails and local beers on offer, the atmosphere of celebration was heady.  The scent of roasting meat and spices wafted out of the ballroom, where over 40 D.C. restaurants served freshly prepared samples from their menu. Attendees crowded around the tables featuring D.C. landmarks like Carmine’s and Ocean Prime as well as independent treasures such as Compass Rose and Room 11.

Local LGBT owned brands had, of course, a strong presence. Denizens Brewing company, owned by lesbian couple Julie Verratti and Emily Bruno, has been making a splash on the craft beer scene in DC – a very well deserved one, I can attest!

For district residents accustomed to political fundraisers featuring cold cheese cubes and mid-shelf Prosecco, Chefs for Equality is a chance to indulge in the delights of a city that is now one of the hottest new dining destinations in the U.S. The event is also a striking reminder of the power and wealth the gay community has amassed.

While D.C. may be known nationally as home to special interests and gridlock, Chefs for Equality put the artisan soul of D.C. on display, reminding us that the political success of HRC is important not just for the legal rights of the LGBT community, but to be able to build a community that can support independent businesses who not only welcome LGBT customers but are proud to support them.

Despite the looming election, few attendees were discussing politics, and not just because most of us were too busy sampling foie grois macaroons. Chefs for Equality was a break in the constant citation of poll numbers, ad buy figures, and campaign itineraries that fill most of our days. For chefs and bartenders, the focus was on their food and supporting HRC’s foundation. The taboo of talking politics at the dinner table definitely extends to the dining rooms and bars of D.C.’s finest establishment, perhaps a necessary precaution in a city famed for partisan gridlock! 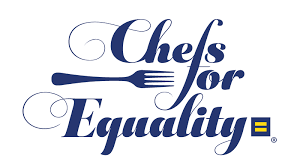 Yet politics came up during the brief speaking program, and no name got more cheers than Hillary Clinton.  Dana Goldberg, the MC for evening (fondly known as everyone’s lesbian best friend), reminded us that at the next Chefs for Equality event, America would have a woman president if we all turned out to vote! Secretary of the Army Eric Fanning, the first openly gay head of service in the U.S. Military, reminded us of exactly why voting matters, “I never imagined I’d return to the Pentagon, let alone in this capacity. So I thank all of you.”

But perhaps the most powerful moment of the evening was watching the crowd watch Sarah MacBride. From the fiercely fashionable Drag for Charity queens to event chair and noted restaurant columnist David Hagedorn, everyone’s face reflected the shared pride of how much this movement has accomplished.

The abundance good local food and local craft drinks make Chefs for Equality a can’t-miss event, but the opportunity to celebrate local artisans and the fight for equality make it a truly spectacular event. As Chef Padua Player said to me, “There is the money, and the power, and the clout in this room to make change. And that’s worth supporting.”