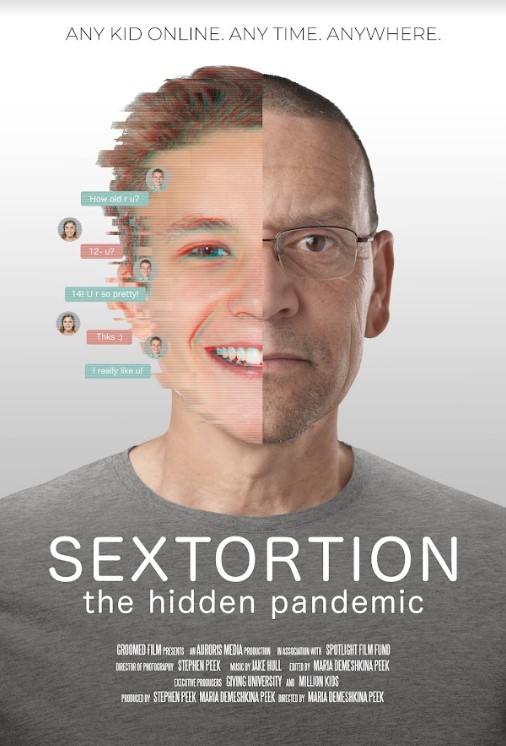 Investigative Documentary “Sextortion: the Hidden Pandemic” Will Be Released to Global TVOD/Digital Audiences on October 4th Following an Educational Theatrical Tour this Summer.

Here is our interview with the filmmakers. We hope that you will watch this and view the trailer for the documentary using the link below:

“The film is a hard-hitting necessary film highlighting the problem of sexual extortion.  Children should never be preyed on in that way.  Nobody should. This film’s cinematography is impressive. Every shot is so intricate.

The score fills you with anger and courage as the story is being told.

Maria and Stephen Peek deserve all the credit in the world for seeking out a problem and raising awareness for such a huge problem. Thank you to the Hollywood times for letting me cover this harrowing film. The film comes out on iTunes October 4th. If you or anyone you know has been hurt by this problem. There are resources.  You are not alone and you never will be.” Jesus Olivares, The Hollywood Times

Auroris Media is launching a national educational screening tour to help save the next child from this fastest growing global crime (current breaking news on this tragic crime in recent days include California, Michigan, Pennsylvania and Australia on CNN, ABC News, etc.).  The screening tour will include Q&A with the filmmakers and expert panels aimed at education and prevention.

To find out screening dates/cities and to watch the trailer go to: https://www.SextortionFilm.com

“Sextortion: The Hidden Pandemic,” which made its premiere at this year’s Santa Barbara International Film Festival as part of the Social Justice Feature Documentaries, tackles a disturbing yet timely subject matter, and is an investigation into the world of online grooming and sextortion—a present-day reality for many children online.

Through partnerships with the Department of Justice  and Homeland Security, the filmmaking team had unique unrestricted access to all government documents for an international sextortion case of a Top Gun pilot with hundreds of victims, unsealed for this film for the very first time.

By interviewing survivors and their parents, this true crime piece exposes this fastest growing crime against children, the tactics of online predators, and the voices of parents and law enforcement poised to stop online child exploitation in its tracks.

Through interviews with the National Center for Missing and Exploited Children (NCMEC), Sextortion: The Hidden Pandemic shows the scale of online enticement and exploitation of children– and what we can do to stop it.

The filmmakers created an online educational curriculum in partnership with NCMEC, which is available at https://www.missingkids.org/netsmartz. Curriculum is available free of charge to educators, parents, federal agents and police departments, and is age-appropriate for middle and high school students.

“Sextortion: The Hidden Pandemic  is the hardest documentary I have ever made. The extremely disturbing subject matter, combined with the challenges of filming during the pandemic made making this film almost an impossible task. The stories of survivors have opened my eyes to the severity and cruelty of this crime, especially the psychological long-term effects on the children and their futures. It is my hope that in the same way, the eyes of the viewers will be opened – and awareness, education and civil action will become the result of this film. We simply cannot allow this to go on,” states director Maria Peek.

To coordinate a screening in your area, to follow the film, and find out screening dates/cities go to: https://www.SextortionFilm.com

About Auroris Media:
Auroris Media is an award-winning film and television production company founded in 2003. They have been telling stories across the globe for 18 years. Auroris docu-series and feature documentaries have aired on Netflix, Amazon Prime, Hulu, NBC and Discovery+ among others. https://auroris.tv/