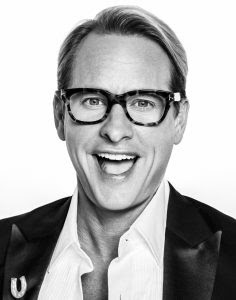 PALM SPRINGS, CA (February 2, 2018) – Emmy-Award winning TV personality, style expert, fashion designer and New York Times best-selling author Carson Kressley will replace Ross Mathews as host of the 24th Annual Steve Chase Humanitarian Awards. It was announced this week that Mathews will be sequestered in the Big Brother Celebrity House as he competes in the reality show that begins airing on February 7 on CBS. Desert AIDS Project (D.A.P.) CEO, David Brinkman shared the organizations support for Mathews. “We, along with all of his Palm Springs friends, will be cheering for Ross as he competes on Celebrity Big Brother and we look forward to having him return to host the 25th Steve Chase Humanitarian Awards in 2019”.

The addition of Kressley compliments an every growing list of style personalities and experts who will greet attendees when they arrive on the red carpet. Palm Springs Life fashion editor Susan Stein will be joined by celebrity fashion stylist Salvador Camarena, fashion designer Franck Ford, “Best in Drag Show” winner Ethylina Canne, Palm Springs Social’s Rob Grace, and KESQ’s Bianca Rae as they report on the Red Carpet Fashion Experience. KMIR News will be at the top of the main red carpet as guests arrive.

Now in its 24th year, the Steve Chase Humanitarian Awards gala has raised millions of dollars to care for people living with HIV.  First organized by and named for famed interior designer Steve Chase – a former D.A.P. donor, volunteer, and board member – the gala is a highlight of the desert social season and pre-ceded the night prior by an exclusive VIP pre-party honoring major donors and celebrity guests.

The awards kick off at 7:00 PM and will feature En Vogue as headline entertainment and Thelma Houston at the after-party.

This year’s awards will shine a bright spotlight on local community members who have dedicated their time, talent and energy to ensuring D.A.P. is able to provide compassionate care to those who need it most. We are excited to announce Tony Marchese, owner of Trio Restaurant, will receive the Partners for Life Award, and Dr. Shubha Kerkar, MD, HIVMA, MACP, AAHIVS, Internal Medicine, Infectious Disease Specialist, will be recognized with the 100 Women Award.

Kressley started his career as an independent stylist and became invaluable to major designers like Ralph Lauren. A few years later, he took a leap into television when, in 2003, he became a breakout star as the fashion savant on Bravo’s “Queer Eye for the Straight Guy”, which won a primetime Emmy.

He revolutionized America’s personal fashion sense of style as he filmed OWN Network’s “Carson-Nation”. Kressley travelled to small towns throughout the U.S. transforming lives – one person at a time- with his signature style, humor and heart. He also hosted multiple TV shows including Lifetime’s “How to Look Good Naked”, ABC’s “True Beauty” and competed on several reality competition shows such as the 13th season of “Dancing With The Stars” where he was a fan favorite.

Kressley is a New York Times best-selling author with three books to his credit, including You’re Different and That’s Super and Off The Cuff: The Essential Style Guide for Men and The Women Who Love Them. His latest book, a women’s style guide Does This Book Make My Butt Look Big? A Cheeky Guide to Feeling Sexier in Your Own Skin & Unleashing Your Personal Style was released on October 11, 2016 [St. Martin’s Press] to rave reviews.

A strong supporter of many philanthropic causes, Kressley uses his celebrity to advance different concerns such as The Trevor Project, The Human Rights Campaign, AIDS WALK, and the Al D. Rodriguez Liver Foundation. Kressley is also a trustee on the board of the True Colors Fund, The American Saddlebred Museum and Philadelphia University.