By Kat King and Valerie Milano

Los Angeles, CA (The Hollywood Times) 6/15/20 – While Season 4 of the critically-acclaimed Hulu adaptation of Margaret Atwood’s famous novel, The Handmaid’s Tale may currently be on pause, as it has been for a cool minute (or, more accurately, like a million minutes, but I mean who’s counting?) because of the ongoing scourge that is COVID-19, The Hollywood Times was fortunate enough to be able to sit in on a Live Q & A Session with Elisabeth Moss (June/Offred), Yvonne Strahovski (Serena Joy Waterford) and Ann Dowd (Aunt Lydia) hosted by Film Independent. And yes, I said “scourge”! A dramatic series demands a dramatically-toned piece! And just in time for a new season of “What Fresh Hell,,?!?!”, also known as EXISTENCE, what could be more relaxing than a catch-up sesh with these three brilliant actresses?

Let’s get down to it!

The ladies all seemed chipper despite their forced hiatus, except of course for Yvonne, who’s got a brand new baby keeping her busy these days. She shared a lovely bit of behind-the-scenes trivia with us about how careful the producers had to be in order to make sure she didn’t appear pregnant, especially since the whole backstory of Serena Joy is that she’s completely infertile. Oh, the irony! Haha! For my part, I say they did a terrific job of it because I sure couldn’t tell!

As for Ann? I hope I’m still brimming with the same bright, warm energy that only comes from Ann Dowd, who simply exudes the exact inverse persona of the woman she plays on the show. She’s like Mirror Universe Aunt Lydia, opposite in nearly every way imaginable: she’s like a glass of Butterbeer at the Three Broomsticks on a cold winter’s eve. The Aunt Lydia that Aunt Lydia wishes she had. 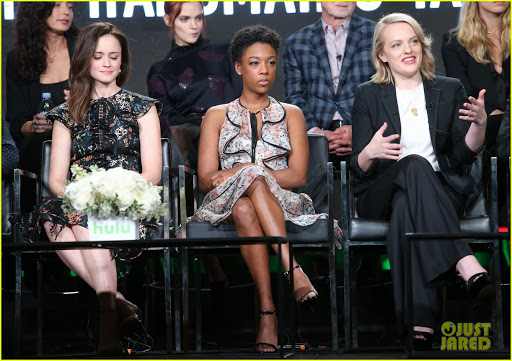 On a more somber note, I find Lydia’s backstory to be the most complex of any of the female characters. She seems to be a woman who’s always struggled with her own sexuality on a deeply private level, primarily because of her religious beliefs. She seems to have already been grounded in her faith, by the time we even see her flashbacks, so I was curious as to how much Ann knew about Lydia’s backstory. According to Ann, she was just as in the dark as most everyone else. There were things about Lydia’s character that Ann was surprised to discover were the real motivations behind some of her choices, so it’s been quite a ride for most of the cast as well!.

One constant criticism we often hear as entertainers, and especially as actors, is that we’re too political or too vocal about our opinions. Well, as actors we’re tasked with a monumental feat of human psychology: becoming another person. Most people have a difficult enough time trying to become their own person, let alone someone else concocted entirely out of one’s imagination. Once you study acting, you’re essentially becoming a student of psychology and sociology. We are constantly dissecting the motivations of the characters, just as we do in the real world, begging us to segue into the startling parallels between what we see in The Handmaid’s Tale versus what’s happening in the United States right now: the rise of Christian Nationalism and escalating political extremism, fueled in large part by the current administration’s unwillingness to condemn both sides.

But how did these women come to be where they are now? They all wanted simply to make the world a safer, better place, right? Honestly, I think that’s true for Serena Joy and Aunt Lydia. Elisabeth and Yvonne find that both of their characters do have redeeming qualities, even in spite of the fact that June has been forced into situations where her own moral compass has been jilted a little south south of “Sanity”, to put it mildly.

It begs the next question: What is Gilead really about, and how did it come to power from the outset? Is this a case of Christian Nationalists leading the blind, angry Conservatives into a revolution they didn’t really ask for, or is the problem here that the fundamentalist Christians who believe the US is a Christian nation are just being led astray by atheistic anarchists hell-bent on reviving a long-standing “Old World Order” (theocratic oligarchy)? Ann and Yvonne shared some terrific insights into how their characters are each able to “shut off” their sense of right and wrong in order to survive in a world they created that is, essentially, cannibalizing them. 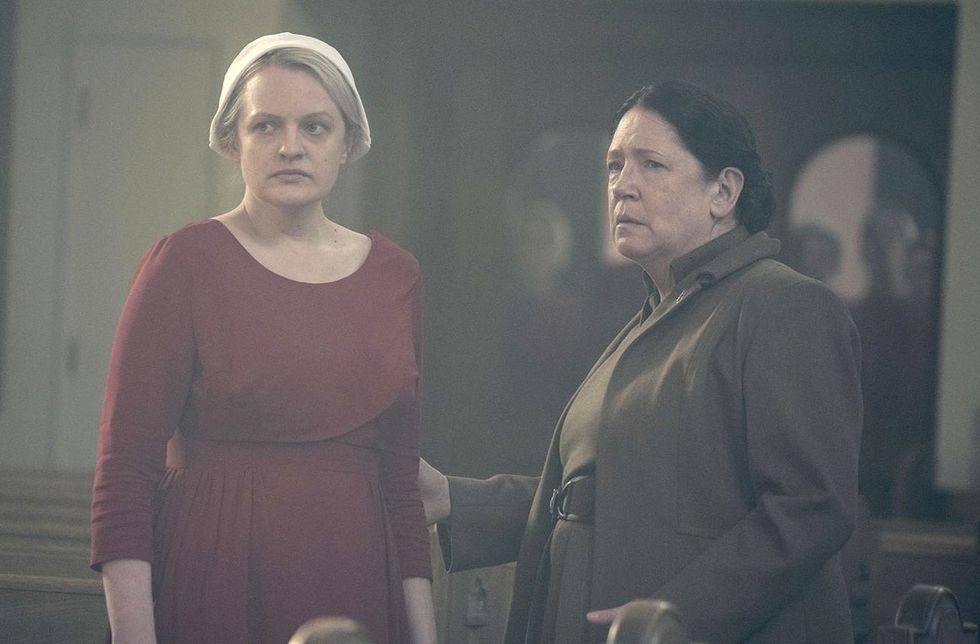 To that end, we asked whether or not we’ll be seeing an adaptation of Margaret Atwood’s recent follow-up to the original novel called The Testaments any time soon. While we weren’t given any kind of official solid answer on that, Ann did say that there will be alignment between her character’s story in the novel with the events of The Handmaid’s Tale. In other words, we should expect the continuity of Lydia’s character to jive with what we’ve already seen in the show so far. Woohoo!

There has never been a more culturally or temporally-relevant series than The Handmaid’s Tale. I enjoyed the opportunity to chop up the major themes of the show, as well as the chance to catch up a bit with these tremendously talented and inspiring actresses. Elisabeth Moss’s “Shirley” is available to stream now on Netflix, Yvonne has a new project called “Stateless” and Ann’s still getting requests for a line reading from “The Leftovers”, which actually sounds like something we need to reboot just for her! Hey, I’d watch that!