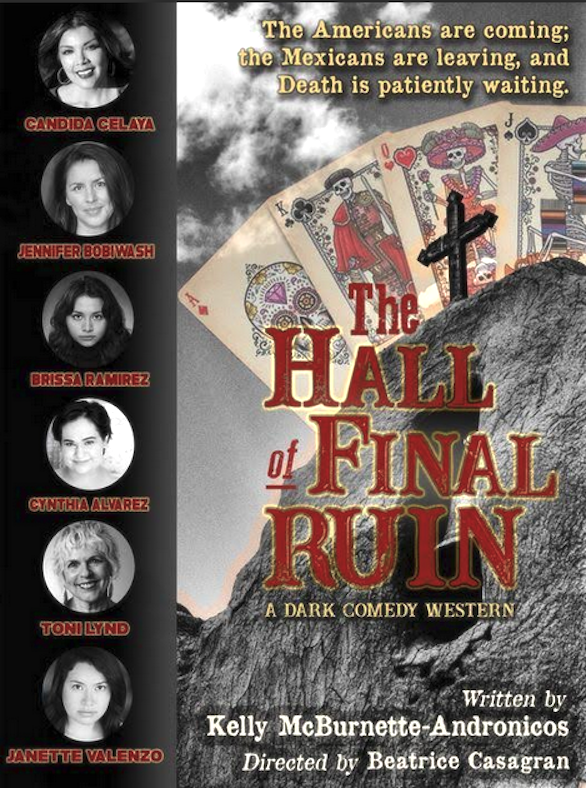 Los Angeles, CA (The Hollywood Times) 3/14/22 – Opening this past weekend at Ophelia’s Jump Theatre in Upland (near Claremont, California) was The Hall of Final Ruin, a dark comedy Western with a supernatural twist. The story takes place in Santa Fe, New Mexico, in 1846, when Santa Fe was still part of Mexico – just as the Americans from Kentucky and Texas were invading with their army. At this point in history, many Mexicans in Santa Fe decided to pack up and head south on the trail to Monterey and Durango. We keep hearing that the Americans are coming. And, for many reasons, this spells death and impending doom. We first meet a narrator on stage who introduces herself as Doña Sebastiaña (Janette Valenzo) with her skeletal “calavera” make-up. She taunts the audience into understanding it is not just the Americans who are coming to Santa Fe, but Death itself. Laying on the sofa in her home in Burro Alley, off of the grand Santa Fe Plaza, is Doña La Tules (Candida Celaya), the “madrina” (godmother) of Santa Fe.  She runs a highly successful gambling “sala” where she successfully rakes in lots of money from local and foreign men foolish to play cards with her.

Doña La Tules lives in her comfortable home with her two adopted granddaughters and her Indigenous assistant and confidante, Pilar (Jennifer Bobiwash). At 52, La Tules knows death is near. She wishes to be buried beneath the floor of her beloved Catholic church, La Parrocchia, and have a smooth transition to Purgatory.  But to achieve a “good death,” La Tules will have to settle her accounts, both earthly and heavenly. She prides herself on being excellent at math, which is essentially to her expertise at cards and accounts.Two intruders arrive to disturb her preparations: One presents herself as a Protestant missionary named and teacher named Sister Karen (Toni Lynd). The other is Doña Sebastiana (Janette Valenzo), the death cart driver and representative of Death itself. Behind all the commotion in the house of Doña La Tules are the historical real events of 1846 during the Mexican-American War, when Santa Fe was captured with almost no resistance because the Mexican army had already retreated to Chihuahua.

The arrival of a strange white woman from Kentucky throws a monkey wrench into Doña La Tules’ original plans, but it also turns out that La Tules has acquired a huge sum of American gold coins from a gambler and hides the gold in a petticoat under her flowing gown. This is also where she manages to conceal as many as five different pistols for self-defense. When this white woman Sister Karen arrives, we come to understand that she is down on her luck because she was robbed by savages of her $40,000 in gold coins. However, we begin to suspect there is a connection between her situation as a poor Kentucky Protestant missionary/teacher and the hoard of gold coins that Doña La Tules has in her possession. Playing on stereotypes, it is quite amusing how Doña La Tules and Pilar manage to get teetotaler Sister Karen drunk on whiskey and change her dress to look a bit more Mexican in style.

In order to save her family from ruin and earn her way into Heaven, La Tules must orchestrate a final, high-stakes card game in which all is both lost and won. To that end, she decides to organize a major gambling event in her “sala,” using her two goddaughters – the chunky and highly emotional Cynthia Sophia Alvarez (with her imaginary pregnancy) and skinny, bookish Brissa Ramirez, as well as the native American housekeeper Pilar (Jennifer Bobiwash) to play cards and intentionally lose money. She even re-educates the pious Protestant woman Sister Karen to play cards, once she has acquired a new taste for bourbon. Of course, Doña La Tules, who is so good at math, has divided up the American gold coins of $40,000 in half for herself and her lavish funeral plans, with the other half returned to Sister Karen, who was originally planning to build a school with the money.

The stakes are high, the pistols are loaded, and the bourbon is flowing. Behind all these antics is Doña Tales’ compromise with Death, which she knows is approaching but she hopes to clean up her spiritual accounts before that happens. The humorous character of Doña Sebastiana is played by Janette Valenzo keeps appearing on stage periodically, dragging her death wagon with a chair and her account ledger on the souls of Santa Fe. Dressed with “calavera” make-up and different outfits – from traditional Mexican to contemporary gangster “cholita,” Valenzo steals the show at times with her street lingo and grim understanding of impending death. Will Doña Tales succeed with her plan to stave off Death long enough to have a “good death”? Therein lies the crux of the play.

The script is by playwright Kelly McBurnette Andronicos, who refers to herself as “The Gothic Playwright.” She states, “Those who share a fascination with the intersection of whimsy and the disturbing, who sense the ties that bind the present to the past, and who elevate the colloquial, the pastoral through their own work, will understand the disjointed planes I try to connect.” A graduate of the University of New Mexico, she is the winner of the Southern Playwrights Competition and the Renaissance Theatrerworks Brink Award. Her full-length plays include A Poison Squad of Whispering Women; To Tread Among Serpents; Second Death of a Mad Wife; and The Resurrection of the Publick Universal Friend.

Beatrice Casagran directed the production. She co-founded Ophelia’s Jump Productions in 2012 and is the company’s Artistic Director. Her award-winning work as a director includes the productions of The Electric Baby, Tribes, Titus Andronicus, Ruthless! The Musical, Boston Marriage, Clybourne Park, and so many more. She received her MFA from Cal State San Bernardino. Ms. Casagran is the Board Vice President of the Theatrical Producers League of Los Angeles.