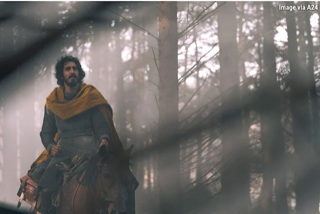 Dev Patel as Gawain in the forest on his quest

Opening in theatres in the U.S. on July 30 is David Lowery’s much-awaited The Green Knight (2021), a bold adaptation of the 14th century Middle English poem Gawain and the Green Knight. I saw this dazzling A42 production courtesy of the CineLounge Sunset, where I could fully appreciate the impressive soundscape of the film.  Seemingly a fantasy adventure tale based on the timeless Arthurian legend, The Green Knight tells the story of Gawain (Dev Patel), King Arthur’s reckless and headstrong nephew, who embarks on a daring quest to confront the mysterious Green Knight, a gigantic green-skinned stranger who arrives at the court of King Arthur on Christmas Day. Gawain is not yet a knight of Arthur’s fabled Round Table but a carousing youth who we first meet in a brothel where he spent a drunken night with his favorite Essel (Alicia Vikander). When asked by King Arthur to share a story of exploits, he has no story to tell of heroic valor and chivalric honor. But suddenly the Green Knight (Ralph Ineson) rides in the heart of Camelot on horseback and challenges any knight to a “game” of beheading. True to the original poem, Gawain jumps up at the chance and promptly cuts off the head of the Green Knight using Arthur’s sword Excalibur. Of course, the Green Knight is not dead but picks up his head and tells Gawain that he must meet him in a year on Christmas Day at the Green Chapel where he will return the blow to Gawain’s neck. When that fateful day is near in December, Gawain will risk his own head, setting off on an epic adventure to prove himself before his family and court.

“I fear I’m not meant for greatness,” confesses Gawain as his date with the Green Knight approaches. But King Arthur (Sean Harris), who is old and increasingly infirm, cares about his nephew and believes in Gawain’s potential as a knight. Setting out across the bleak wintry plain and through forests and mountainous terrain, Gawain contends with ghosts, giants, thieves, and schemers in what becomes a deeper journey to define his character and prove his worth in the eyes of his family and kingdom by facing the ultimate challenger. Lowery sticks to the basic structure of a young man who accepts a challenge and then must pass various tests and temptations on an odyssey of self-discovery to prove his bravery and honor. He meets a wily young scavenger picking valuables from the corpses on a battlefield (Barry Keoghan); the ghost of St. Winifred (Erin Kellyman), who seeks his help to find peace; a tribe of wandering gentle giants; and a talking fox that leads him to the castle of a lord (Joel Edgerton) and his seductive lady (Vikander again), whose temptations are a test of Gawain’s integrity. Interestingly enough, it is the seductive lady who provides an extended explanation that Gawain’s quest for honor will end, like it does for everyone, in death.

This is a boldly unconventional film full of puzzling ambiguities, and probably deserves more than one viewing. As Dev Patel, when interviewed, points out about his characterization of Gawain, “It’s a fine balance of an egotistical, head-strong young man and trying to make the audience invest in him and make him so likeable but also has such terrible attributes that make you very frustrated with the guy.” As an actor, Dev Patel is quite magnetic in the film, portraying Gawain as “lost and flailing – a very human hero, but with ugly qualities.” As the film shifts away from the castle of King Arthur and out into the mysterious wild landscape, the magical realism of Gawain’s quest becomes dominant. Losing his horse, armor, and weapons, he is left by attackers as almost dead in the forest – and, in a sense, his knightly aspirations are deconstructed to the point of psychological impasse by his experiences of dark magic and supernatural horror.

There is so much for students of cinema to appreciate and analyze in David Lowery’s The Green Knight. Lowery retells the medieval tale in way that borrows heavily from the medieval world but also makes this a coming-of-age story. There is also a feminist twist to the film. The enchantress, Morgan le Fay (Sarita Choudhury), not as Gawain’s aunt but as his mother. At the beginning of the film, Morgan with her handmaidens conjure up the test of her son’s valor. This hints at the story’s clash between the Christianity of civilization at Court and the Paganism that still rules over nature. Morgan also sews a talisman into the green sash Gawain will wear for protection, which changes hands a number of times and ends up a fatal tipping point for Gawain.

Lowery is a gifted visual storyteller and the topography of the film is stunningly captured by cinematographer Andrew Droz Palermo. While the original poem references Welsh geography, the filmmakers chose Irish locations in County Wicklow, with the 12th century Cahir Castle in County Tipperary (a site used in Excalibur and Barry Lyndon) standing in for Camelot. The soundscape created by Johnny Marshall works hand in hand with the dense, turbulent score by Daniel Hart. We really do feel like we have been magically transported into a medieval world. Lowery’s The Green Knight is clearly not an action adventure film and, for many viewers, will seem slow-moving and confusing. Consider some of Lowery’s major cinematic influences – Terrence Malick, and Apichatpong Weerasethakul, as well as Ingmar Bergson’s The Seventh Seal and Robert Bresson’s Lancelot du Lac. This is Lowery’s fifth film and, like his recent Ghost Story (2017) plays with time and memory. The producer and distributor is A42, a company which seems to know its audience.