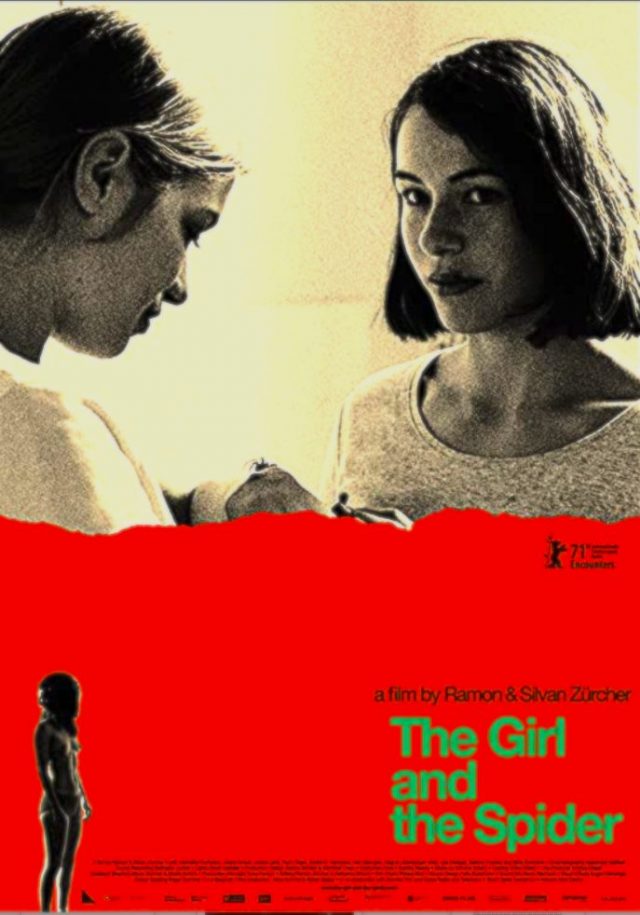 Los Angeles, CA (The Hollywood Times) 4/11/22 – Upcoming at the Laemmle Theatres this Friday is an interesting small film “The Girl and the Spider.” Screening at the 2020 Arts & Archive Cultural Center on Beverly Boulevard on Wednesday, April 13 and on Friday April 15 at several Laemmle Theatres around town is The Girl and the Spider (Das Mädchen und die Spinne, Switzerland, 2021), the latest film by Ramon Zürcher co-directed with his twin brother Silvan Zürcher.

This is a film with a novel approach to filmmaking, taking place entirely in a cramped apartment that is used to reveal the inner lives of the characters. The Zürchers’ movies are like prisms, capturing the things people do when they think no one’s watching … and when they desperately wish they were. It’s all about the feelings that arise – more often implied rather than articulated in words – when Lisa (Liliane Amuat) abandons her roommates to rent her own flat. Amid all the commotion of the move, Mara (Henriette Confurius) doesn’t quite know what to do with herself, sulking on the sidelines, picking at a hangnail. She and Lisa were evidently more than just friends, though it’s left deliberately abstruse – a lot like the herpes blister on her upper lip, which transfers from Mara to Lisa midway through the film, its significance uncertain but striking all the same.

The main action of the film is clearly the logistics of Lisa’s move and all the people involved in that move from her apartment. The Zürcher Brothers are more interested in the micro-dramas the move creates: jealousy, seduction, abandonment, betrayal. Most of these feelings are filtered through Mara’s eyes – which are easily the sullen brunette’s most striking feature, swimming-pool blue in the center, bordered by a darker, deep-sea color around the edges. She spends much of the film peering out on the changes around her, finding idle – and occasionally destructive – distractions. While Lisa’s mother, Astrid (Ursina Lardi), and the contractors try to make fixes to the new apartment, Mara often appears to be in the way. She’s clearly not helping and, in some cases, actually makes the situation worse, as when she aggravates the dog on the other side of a bathroom door, absent-mindedly gouges the new countertop or stabs a Styrofoam cup full of wine with a pencil (making the world’s worst sound in the process). There’s something off about this young woman, to the point where it’s downright unnerving to imagine what she plans to do with the box cutter.

From this threadbare setup, the Zürchers fashion an entire ecosystem of characters moving in, around, and between the apartments. Friends, family, movers, and pets are seen navigating these tight quarters in a kind of domestic dance in which individual dramas and relationships are articulated through furtive glances, subtle gestures, and off-hand exchanges, many of which occur either off-screen or in unexpected ways within the frame. Again, pairing static setups with carefully manicured lightning, the Zürcher Brothers get remarkable mileage out of their cubist arrangement of bodies and meticulous mise en scene – to say nothing of the intricate sound design.

This deceptively simple-looking scenario masks myriad questions: What kind of connection exists between Lisa and Mara? How does Astrid feel about her daughter’s strange friend? And why does every look exchanged between characters have a predatory, almost sexual hunger behind it? Few directors could get away with giving audiences so little context or plot, but the Zürchers succeed in piquing our curiosity, which is all one really needs to sustain a film. Some of these mini mysteries do have answers – like the one about whether the lonely woman in Lisa’s old building has been kidnapping the cat. (We see its fur and a cat-shaped impression on her bed, so that gets explained.) Others are all but impossible to untangle. For example, why does the downstairs neighbor – who abandons her crying infant to come investigate – plant a kiss on Mara’s cheek, whispering, “It’s a shame it’s not you moving in. I’m sure we would have fun together.”

There’s a refreshing (but also perplexing) sexual liberty afoot here, set in motion by the music-box whirl of Eugen Doga’s “Gramophone” Russian waltz, which serves as a motif throughout. Many of the interactions have a curious hormonal undercurrent to them, and no one seems too concerned about class or gender barriers. Astrid flirts with the handyman (André M. Hennicke) she’s hired to fix up Lisa’s place, while his son/assistant Jan (Flurin Giger) makes awkward small talk and later shows up at a party hoping to sleep with Mara. She crushes Jan’s hopes as she would a fly, then pawns him off to her neighbor Kerstin (Dagna Litzenberger Vinet) and the black widow-like Nora (Lea Draeger).

Then there is the spider, the namesake of the film, which remains a silent side character: In two separate scenes, Mara lets the spider crawl along her arm, passing it to Lisa in her new kitchen and later to a near-naked Jan – this transfer like some kind of caress, or herpes, depending on how you choose to read it.

As Ramon Zürcher explained in the Zoom Q&A after the screening of the film: “We’re not very interested in showing everyday life in a realistic manner, but with the characters I still like to show just a little bit of their real life, to keep them complex. So, for Mara and Lisa, their relationship is somewhere between friendship and love. But when you meet people, you usually don’t know if they’re homosexual, heterosexual, or whatever – they don’t have a label on them. We didn’t want to define the characters. We wanted it to be more like a spectrum, with fluid characters. We had one formal idea as it relates to the characters: that Mara would be the static body and Lisa the moving body. We wanted it to be like a battle between static and movement, with some characters moving like Lisa while others disrupt that movement, and thus are more like Mara, who wants to maintain the status quo.”

By the end of the film, we do encounter a backstory about the woman who previously lived in this apartment and left her piano. She used to clean hotel rooms in Zurich but got bored and took a job on an ocean-going cruise liner doing the same. It seems that she escaped the cramped apartment and now travels the world. The Girl and the Spider premiered at the Berlin Film Festival in 2021. Eight years on from their landmark debut The Strange Little Cat (2013), Swiss brothers Ramon and Silvan Zürcher have made their long-awaited return with The Girl and the Spider, the second in a planned trilogy of films about human connection and the slippery nature of kinship. Both films reveal a singular worldview in which cinematic time and space are made to enfold and reanimate the messiness of everyday life.