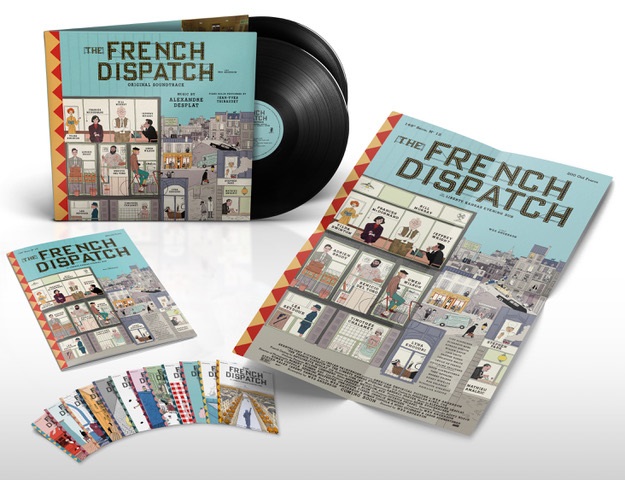 Limited Edition Bundles Including LPs, Ephemera and 7” Available for Pre-Order

THE FRENCH DISPATCH IN THEATERS NOW

Also being released by ABKCO is the concept album Chansons  d’Ennui Tip-Top, wherein Pulp frontperson Jarvis Cocker sings French hits of the 1960s as the fictitious singer Tip-Top referenced in the film. This unique companion album has musical backing provided by JARVIS… plus Laetitia Sadier (Stereolab) featured on the duet “Paroles, Paroles.” The digital album is available in Spatial audio, along with the 180 gram vinyl version October 22. The CD versions of Tip-Top and the soundtrack will follow on November 19. The limited-edition Chansons d’Ennui Tip-Top  Deluxe bundle will be available December 3; it includes  the  Chansons d’Ennui Tip-Top vinyl, a double-sided poster for The French Dispatch and Tip-Top, and a 7” vinyl single of the songs “Aline” and “Paroles, Paroles” in a full color sleeve. The first fans to order the Deluxe will receive a special surprise from Jarvis Cocker.

The French Dispatch tells three stories published in this legendary journal. It celebrates writers and the thrill of great storytelling. “An ode to publishing, writing, romance, politics, food, and so much else, The French Dispatch is a bustling delight,” Vogue declared. The Hollywood Reporter describes the film as “bursting at the seams with hand-crafted visual delights and eccentric performances from a stacked ensemble.”

“Alexandre Desplat outdoes himself,” said Fandango of the score for The French Dispatch. The album also features Jarvis Cocker’s impassioned cover of the French pop hit “Aline”, originally written and recorded by French pop icon Christophe. Expanding on the universe of The French Dispatch, Wes Anderson and Jarvis Cocker decided to collaborate on an entire album of French material from the same period for the album  Chansons  d’Ennui Tip-Top – containing songs associated with artists like Françoise Hardy, Serge Gainsbourg, Brigitte Bardot and Jacques Dutronc.

The Berensen Lectures at the Clampette Collection – Alexandre Desplat

The Private Dining Room of the Police Commissioner – Alexandre Desplat

The Berensen Lectures at the Clampette Collection – Alexandre Desplat

The Private Dining Room of the Police Commissioner – Alexandre Desplat

Academy Award® winning Parisian composer Alexandre Desplat began his career scoring French films, switching over to English language films in the early 2000s, and he has since earned an impressive number of accolades. He has collaborated with Wes Anderson numerous times,  including  Fantastic Mr. Fox, Moonrise Kingdom and The Grand Budapest Hotel, the latter earning him the 2015 Academy Award® for Best Original Score as well as a Grammy Award® for Best Score Soundtrack for Visual Media. Desplat has racked up eleven Oscar® nominations to date, including his second Oscar win and his second Golden Globe Award® for The Shape of Water in 2018.

Jarvis Cocker is a musician & broadcaster from the north of England. He formed the band Pulp in 1978 whilst at secondary school. They went on to become one of the most successful UK groups of the 1990s. Between 2009 & 2017 he presented the BBC 6Music programme “Jarvis Cocker’s Sunday Service” as well as the ongoing, award-winning BBC Radio 4 documentary series “Wireless Nights”.  He has honorary doctorates from both Sheffield Hallam University & Central Saint Martin’s School of Art (which he attended 1988-91). His lyric collection “Mother, Brother, Lover” was published by Faber in 2011. “Good Pop, Bad Pop”, his first work of long-form prose, will be published by Jonathan Cape in March 2022. He divides his time between Paris, London & the Peak District. His star-sign is