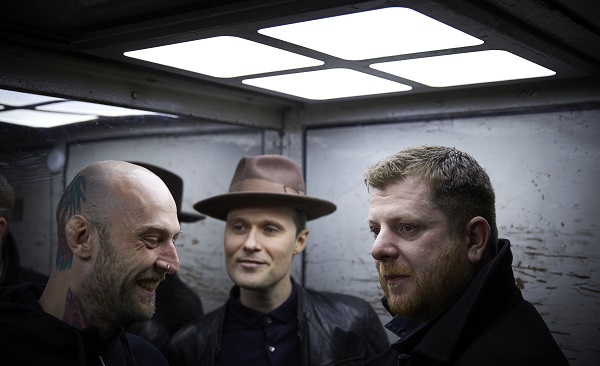 WITH COVID-19 HAVING SIGNIFICANT IMPACT ON THE ARTS; THE FRATELLIS PROVIDE SUPPORT TO THE MUSIC COMMUNITY AT A TIME WHEN IT NEEDS IT THE MOST

London, United Kingdom (October 19, 2020)–Multi-platinum, award-winning Scottish rock band, The Fratellis,  announced their global music competition on October 19, to give one unknown music artist or band a platform to accelerate their path to stardom.  This once-in-a-lifetime prize features a studio session to record the artist or band’s winning single, which will be mixed by The Fratellis’ producer/mixer, Tony Hoffer (Angels & Airwaves, Fitz and the Tantrums, Elle King); and a chance to win a worldwide deal to release a single with Cooking Vinyl records.The winner will also get the opportunity to work with The Fratellis themselves, including one-on-one time with the band through an online masterclass, and a money-can’t-buy slot on a virtual upcoming Fratellis gig (date TBA).

To get involved, upcoming talent are invited to submit their tracks via @Vype_worldwide Instagram page, with both the shortlist and the final selection being chosen by The Fratellis themselves. The entire experience will be professionally marketed, including the creation of a music video of the unknown talent’s record. A behind-the-scenes style video with The Fratellis will also be shared across The Fratellis’ and Vype’s social channels for the world to see.  The competition is live from October 19-28, and applicants must read the T&Cs (+ Privacy Notice) before getting started. The winner will be chosen on November 2.  Watch the full commercial HERE.

“We’re proud to be working with Vype to give a new artist the chance to work with some of the most talented professionals in the music industry…and The Fratellis! Getting our first proper single released through a big label was a huge deal for us so it will be exciting to help a new artist achieve this milestone and hopefully see them go on to have a long career in music,” says The Fratellis.

The Fratellis are a multi-platinum Scottish rock band from Glasgow, formed in 2005, consisting of lead vocalist and guitarist Jon Fratelli, bassist and backing vocalist Barry Fratelli, and drummer and backing vocalist Mince Fratelli. The Fratellis recently announced their sixth studio album titled Half Drunk Under a Full Moon, to be released on April 9, 2021, alongside the launch of a UK and European tour. The album features the single, “Six Days In June,” which released earlier this year. A theatrical blast of pop joy, “Six Days In June” swings on brass, kick-drum and features Jon Fratelli’s trademark falsetto vocals. Listen to “Six Days In June” HERE.

Success came quickly to The Fratellis, who formed in Glasgow in 2005.  Arriving a year later, their debut album, Costello Music, which contained the globe-conquering hit “Chelsea Dagger,” quickly went double-platinum and led to The Fratellis winning the Brit Award for British Breakthrough Act in 2007. A successful second album, Here We Stand, followed in 2008, but this whirlwind of success came at a cost, and by the end of the decade the trio were forced into indefinite hiatus, burned out from their relentless life on the road.

Since reforming in 2012, The Fratellis have been on a continuous upward trajectory, finding themselves enjoying a more sustainable type of success. They have steadily regained their live following thanks to a new generation of Fratellis fans all over the world. Half Drunk Under A Full Moon finds the trio entering their third decade at ease with who they are and where they are: a band who have not only survived but thrived, and are currently making the best, most confident, most ambitious music of their career.