Los Angeles, CA (The Hollywood Times) 9/29/17 – “When people ask you ‘what’s your drug?’, say I dance!” The world premiere of “Freddy” tells the dramatic story about the brilliant yet drug addicted ballet dancer, Freddy Herko. Fred Herko, portrayed by Marty Dew, was a musical prodigy and a central figure in New York’s downtown advent-garde. The story takes place in Greenwich Village in 1964 and the present time, showing the character Shelley at two very different stages of her life. Past Shelley was portrayed by Katie McConaughy and present-day Shelley was portrayed by Susan Wilder. Naïve Shelley falls heads over heels in love with Freddy, and ends up ruining her marriage and uprooting her life for him. What she didn’t realize is that Freddy would never return those feelings; not only because he was gay but because he was too addicted to drugs. Throughout the production, we see Freddy’s creativity and art thrive and crumble. The talented genius eventually shatters: “It’s flying or dying.” 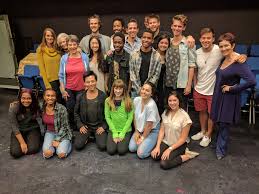 This production is fiery, sexy, relatable and an all-around enjoyable show. The movement and choreography throughout this show was phenomenal; Cate Caplin and Gary Franco did a fantastic job! The ensemble was so connected, verbally and physically, in this production. There was never a moment where an actor wasn’t entirely engaged, giving 110% of themselves on that stage.  A strong ensemble is key to a successful production. Another great thing about this show is that it was only 60 minutes! This time frame is great because the story is told in whole while being able to keep the audience engaged and entertained for the whole duration of the performance; not fidgeting around in their seats waiting for an intermission to stretch.

If you want to see an eccentric, short, and beautiful production filled with a great story and choreography, go see “Freddy” at the Caminito Theatre. Performances take place September 27th through October 14th. The Caminito Theatre is located on the campus of Los Angeles City College at 855 N Vermont Ave. Los Angeles, CA 90029. Parking is FREE in Structure 4 on Heliotrope at Monroe (between Santa Monica and Melrose). For more information, call (323) 663-1525 or go to www.FountainTheatre.com.

Moulin Rouge Opens a Musical Gateway to Magic and Desire

Sam Shepard’s FOOL FOR LOVE at the Hudson Theatre