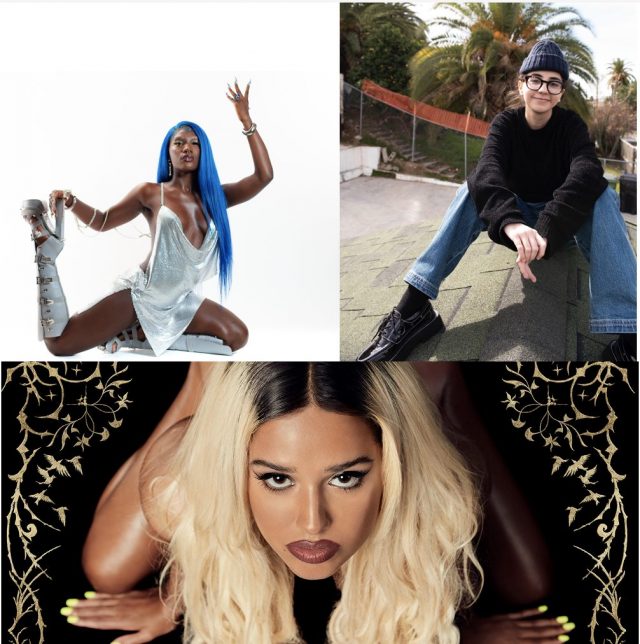 Palm Springs, CA – After announcing a sensational lineup, The Dinah completes its bill with the addition of Tommy Genesis, St Panther and Doe Chii.

Known for always having its finger on the pulse of the latest music trends, The Dinah is once again showcasing the hitmakers of tomorrow.

As a MUST DO venue that has proven to be the catalyst propelling new young artists to superstar status, The Dinah was a logical choice for Tommy Genesis, Doe Chii and St. Panther who are all poised to reach household name status and conquer a global audience in the very short future.

One of the fastest rising artists to keep your eyes on, Tommy Genesis will headline the Friday Pool Party at The Hilton Hotel on Palms Springs. CA.  Tommy Genesis is in her own lane, full throttle, full speed ahead. The Canadian artist is back with her third album Goldilocks X – an empowering & hypnotic album.  A self-described “fetish rapper” whose lyrics confront traditional notions of sex and sexuality, Tommy Genesis is a multi-disciplinary artist who has embraced music, fashion, and visual art as means of creative expression.

Genesis became one of the most talked-about new artists on the hip-hop underground, and earned mainstream exposure when Calvin Klein used her as a model in their 2016 advertising campaign. She issued the single “100 Bad,” which a few months later received a remix treatment from Charli XCX.

Saturday’s Pool party will welcome DOECHII, who is known for exceeding expectations with her explosive presence (whether on stage, on screen or in headphones).  Hitting audiences with witty punchlines, vulnerable honesty, and signature looks – she’s made herself impossible to miss at headlining performances such as Major Stage, The Voice, Tampa Beat Weekend, Vibe Sesh, and many more.

Balancing artistries such as music, fashion, and creative direction, she’s allowed these influences to make their way into her music – reflected in her vibrant EP’s, 2020’s Oh The Places You’ll Go and 2021’s BRA-LESS.

Highlighting the experience of the alternative black girl; DOECHII has begun to dominate the internet over this past year with “Yucky Blucky Fruitcake” – generating over 20 million streams and sending waves through TikTok. Securing co-signs from figures like SZA, Noname, Gary V, and appearing on Isaiah Rashad’s sophomore album, The House Is Burning – DOECHII’s takeover has only barely begun.

SoCal vocalist, producer, and multi-instrumentalist St. Panther has solidified herself as an artist to watch after being named “Best New Artist” by Los Angeles radio staple KCRW and placed in rotation on BBC Radio 1 with legendary DJs like Annie Mac saying, “I love her, I love the music.”

She is now poised to make waves at the Dinah with a highly anticipated performance on Sunday, October 3 closing the famed day party on a high and unforgettable note.

With her debut 6-track project These Days under Ricky Reed’s Nice Life Recording Company and Nate Mercereau’s How So Records, the EP has been met with critical acclaim.  St. Panther recently teamed up with Amazon to release her single “Real Love Takes Time” as an Amazon Original track – receiving Billboards in NYC and Los Angeles, global playlisting, as well as radio play on KROQ, KCSN, BBC Radio 1, and BBC 6. On September 17, she is releasing a new song called “Problems” on Nice Life Record.

While The Dinah has been spearheading music careers, it has, most importantly, also been transforming lives and making a difference in and for the LGBT community. Offering an unparalleled one-of-a-kind experience for myriads of women who come every year from all over the world to enjoy the freedom to be who they truly are without fearing the judgment of others, and gain, as well, a tremendous amount of self-worth.

The five-day world-renown weekend is already making a lot of noise as it gets ready to finally celebrate its milestone 30 Anniversary.

Thirty years of excellence and unwavering commitment to deliver world-class entertainment and top-notch customer service. Dinah goers can certainly look forward to a tremendous diverse lineup and next level production for the big 3.0.

For more information and updates go to: www.thedinah.com

. Full COVID-19 vaccination or negative COVID-19 test results will be required to attend the Dinah.

. Proof of vaccine or negative COVID-19 test required indoors when entering a bar or restaurant.

For more information and updates regarding the City’s COVID-19 response, visit www.palmspringsca.gov.