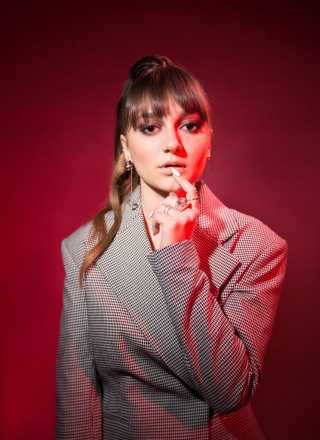 Palm Springs, CA (The Hollywood Times) 1/4/19–The Dinah is pleased to welcome Grammy Award winning artist Daya as a headlining performer! Along with hip-hop sensations Diiamon’d Royalty and Kodie Shane, musician and producer Leikeli47, and several world renowned DJs, the 2019 event is shaping up to be one of our hottest yet!The Dinah is a 5-day event created by Mariah Hanson to celebrate, unite and empower women. The festival includes high profile performances by nationally renowned recording artists, massive pool parties with world famous DJs and go-go dancers, red carpet events with celebrity guests and musical performers, meet and greets with your favorite celebians, and so much more.

There’s a reason The Dinah is considered the largest lesbian event in the world and there will be something for everyone at what is expected to be the biggest event to date in 2019! Keep an eye out for more announcements to come.
We have an amazing line-up in store!

After making her debut with 2016’s double-platinum single “Hide Away”, 20-year-old singer/songwriter Daya wasted no time in skyrocketing her career. Soon after, she won her first ever Grammy Award for smash collaboration with The Chainsmokers “Don’t Let Me Down” (6x platinum), released a gold-certified album, and headlined a national tour.

Just months after debuting at #5 on Billboard’s 21 Under 21 list in 2016, the Pittsburgh-born independent artist emerged as the youngest honoree on Forbes’ 30 Under 30 music list in 2017. Daya told Forbes her advice for success was “Stay humble, be fearless, and work, work, work, work, work, work.” She goes on to say, “My music reflects my strong belief in equal opportunities for all — specifically young girls and women.”

In addition to signing with Interscope Records and releasing two of her own singles (“New” and “Safe”), Daya has collaborated with Gryffin/Illenium (“Feel Good”) and RL Grime (“I Wanna Know”).

Currently finishing up her sophomore album, which will showcase the full depth of her talent and artistry, Daya hopes to continue the conversation on love, life, and the current state of our world with her fans, and looks forward to releasing new music in early 2019.

Even if you’ve followed the meteoric rise of musician and producer Leikeli47 thus far, you’re not prepared for where she’s going to take you next. Her second album, Acrylic, is brash, bold, and as gleefully tough as the material the album takes its name from. “We have this saying that when you smell acrylic, you know just where you are,” she explains while discussing what the album title means to her. “Acrylic is a hard substance and I feel this is one of my harder records to date. It speaks to how hard times don’t break you, they make you.”

The road to Acrylic has been eventful for Leikeli47, who’s only seen her profile further elevate over the past year. She’s notched several appearances on the soundtrack for HBO’s Insecure, most recently with Acrylic‘s snappy, infectious single “Girl Blunt”. The release of her debut album, last year’s Wash & Set, spread the word about her considerable talents and led to the type of opportunities—performing for Natalie Portman, appearing with Lion Babe at Coachella, and having her inaugural ArfroPunk performance—that up-and-coming artists only dream of.

Acrylic is brimming with a variety of melodic moods, from the brittle bounce of the title track to the brassy swing of “Hoyt and Schermerhorn”. The vibe is big in every sense, a deliberate choice to expand Leikeli47’s world of sound and showcase her true ambition. “I remember starting off as a producer, really jumping in and taking a chance with my sound—it was minimal, but it still had the boom to it,” she states while discussing the progression that Acrylicrepresents. “There’s been so much growth, sonically and lyrically, since. The sounds are bigger, the lyrics are more brash. It’s been a really ill creative learning process.”

There’s nothing but laser-guided focus on Acrylic, a true representation of the breadth of Leikeli47’s talent. “Full Set (A New Style)” pulses with flashy ballroom samples and Leikeli47’s up-front cadence, while “Roll Call” is a boisterous and flat-out fun tribute to HBCUs (Historically Black Colleges and Universities). “It highlights the black college experience,” she explains. “One love to all of the higher learning institutions but there’s just a special line of love I have for my Historically Black Institutions. Getting your education is bomb no matter where you decide to go but it was very fun to get in and create art around a culture that’s not often celebrated. I get to show people how we get down and that’s a beautiful thing.”

And that’s the overriding message behind Acrylic: come together and have some fun, regardless of who you are. “I’m all about letting people in — I love putting my message in music,” Leikeli47 explains when talking about her artistic mission statement. “It’s a great way to engage people and get them talking to each other.” Leikeli47 wants to bring the world together as one, and through Acrylic, her message as infectious as ever.

On the heels of a new music video release (via Noisey) from burgeoning Atlanta hip-hop talent Kodie Shane, The Dinah announces what will surely be a legendary performance from the wildly popular rapper. Shane’s new album, Young HeartThrob (Epic Records), has seen praise from the likes of HighSnobiety, Complex, and VIBE, who say “Shane is set to make significant noise in the industry as one of 2018’s most promising young artists.”

Young HeartThrob shows off Shane’s wide creative palette, dipping in and out of moments of pop bliss, hip-hop grit, and future-facing alternative ambience.

Shane’s 2016 debut EP features fan-favorite “Sad (feat. Lil Yachty)” which garnered millions of Spotify streams, followed by the runaway success of “Drip on My Walk”. Never one to slow down, Shane spent 2017 creating even more music, with the ten-track Big Trouble Little Jupiter mixtape and seven-track Back From The Future EP.

Across her releases, the artist has garnered praise from The FADER, Pitchfork, Vogue,Pigeons and Planes, Paper, NYLON, W Magazine, Interview Magazine, Mass Appeal and more. Most recently, Billboard named her one of 2018’s biggest pop stars to watch and she covered Galore’s Spring 2018 Music issue.

Quickly emerging as one of Atlanta’s freshest and fiercest voices, Shane brings tightly-wound rhymes, clever lyrics, and ear-worm melodies to songs that perfectly blend infectious pop with beat-driven hip-hop. The genre blending innovator has shared the stage with the likes of Lil Yachty, Lil Uzi Vert, The Internet, Snakehips, Billie Eilish, and more and is sure to ignite the stage at The Dinah 2019!
Watch video “Flex on Me (ft TK Kravitz)” and stream official audio for “Thinking Bout You”.
Follow Kodie Shane on Instagram, Facebook, and Twitter.

In keeping with The Dinah’s history of showcasing and empowering women who are breaking glass ceilings, The Dinah has welcomed Diiamon’d Royalty to their illustrious family of performers. The Eden Entertainment Group artist is widely known in the LGBTQIA+ community for being a viral YouTube sensation after her freestyle video shortly broke the internet with over 1.5 million views.

Her lyrics carry unforgettable truths and her raw talent is undeniable. Growing up in a small country town in Virginia, she describes at times feeling isolated because she did not fit in. Channeling those feelings into her craft, she was recently in the top 4 of Coast 2 Coast’s 2017 artist showcase world championship in Miami Beach and signed to South Coast Records.

Not only is she a great freestyle and recording artist, but she’s a dynamite entertainer. She draws in her audience with her ability to lay it all out there and be her true self, thrilling audiences with her clever rhymes and smooth delivery. Her debut album Mirrorz (listen onSpotify) shows her growth and versatility as an artist. Diiamon’d Royalty is not a name you will forget soon and she is certainly a rapper to watch!