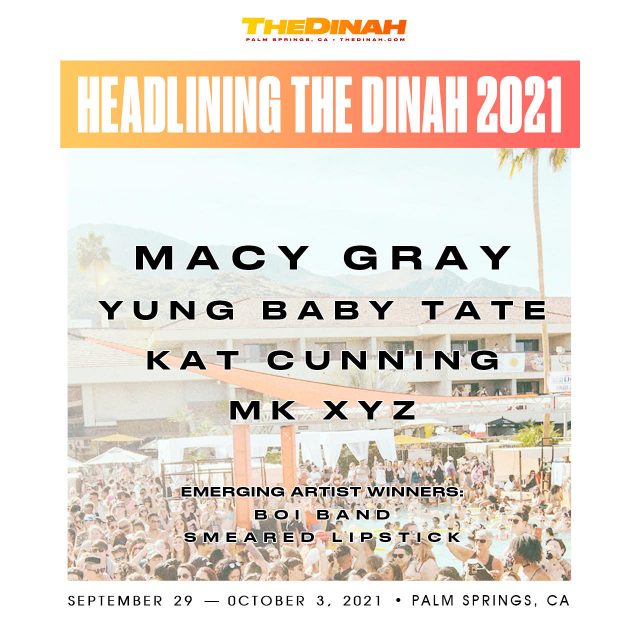 PALM SPRINGS, CA – The Dinah, the largest all-girl music festival in the world, has announced the entertainment line-up for its 2021 festival taking place September 29 through October 3 in Palm Springs, CA.

After almost a year-and-a-half of practically no in-person concerts, festivals and live music, The Dinah is back on track for an exceptional 5-day event with an epic slate of Top Ten Billboard headliners, rising pop stars, and celebrities. Full COVID-19 vaccination or negative COVID-19 test results will be required to attend the event.

Known for its diverse, eclectic, and multi-genre line-ups, this year’s Dinah will be no different.

Featuring performances from both established and up and coming talent, Mariah Hanson (founder and producer of The Dinah), assembled a stellar list of performers that will once again turn the city of Palm Springs into the ultimate entertainment hub.

That unmistakable rasp, unshakable grasp on soul, and funky spirit ensured Macy Gray her status as a 21st century icon since her arrival with the triple-platinum How Life Is in 1999. Selling over 25 million total albums globally, winning a GRAMMY® Award and two BRIT Awards, collaborating with everyone from Ariana Grande to Galactic, her voice has consistently resounded throughout pop culture.

Sharing the stage with Gray is another Grammy-award winner: Yung Baby Tate.

Tate may have inherited some of her mother’s musical gift (her mother, Dionne Farris, is best known for being a member of Arrested Development), but she’s built her own path to pop stardom using her own creativity and talent. On a meteoric rise, Tate closed 2020 dropping After The Rain, a deeply personal EP featuring the standout track, “I Am” with rising Alabama rapper Flo Milli, which quickly evolved into an anthem of affirmations and a Tik Tok sensation, earning over 1 million views on YouTube.

Taking the stage at the Black and White Ball on Friday, October 1, is actress, singer, songwriter, performer and dancer, MK xyz.  Music’s “it” girl gained popularity after releasing her song “Pass it” featuring G-Eazy.  She released her latest EP titled “Sweet Spot” via Epic Records this past spring and has just been casted on Netflix upcoming drama vampire series “First Kill.”

Although the music industry took a huge hit in 2020, artists continued to release great music.

The Dinah discovered so many emerging talents that need to be heard and is now excited to present two bands to watch in 2021: Boi Band and Smeared Lipstick who will respectively headline the opening and closing parties at AsiaSF Palm Springs. Both bands are part of The Dinah’s “Emerging Artist Contest” created as a commitment to the community to offer womxn and non-binary talents coveted stage time and exposure.

A cultural phenomenon that has over these past 30 years reached epic proportions, The Dinah has indisputably become an inescapable venue for female recording artists to breakthrough, and features a phenomenal line-up of artists ever to perform at a LGBTQ+ women event:

Lady Gaga. Katy Perry, Bebe Rexha, Kesha, Iggy Azalea, Jessie Reyes, Tegan & Sara, Meghan Trainor and most recently Lizzo (among many others) are all #1 Billboard charters who have headlined the world class event.

From a small, one-night event at a Palm Springs Museum with 1,500 participants thirty years ago, to booking lavish locations at deluxe hotels with some 15,000-plus attendees (LGBTQ+ women, non-binary & trans attendees, and straight allies), and major corporate sponsors today, The Dinah has evolved into one of Palm Springs & the Coachella Valley’s largest tourism boosters, as well as an event the entertainment industry’s most elite go to.

The Dinah will be celebrating its 30th milestone anniversary at its usual stomping grounds: The Hilton Hotel, AsiaSF Palm Springs and the Palm Springs Convention Center.

Place, atmosphere, and people you want to comeback for! What makes The Dinah so contagiously irresistible?                           Hands down, the event draws its massive appeal in its diversity – the mix of cultures – and the freedom that is always present in the air.