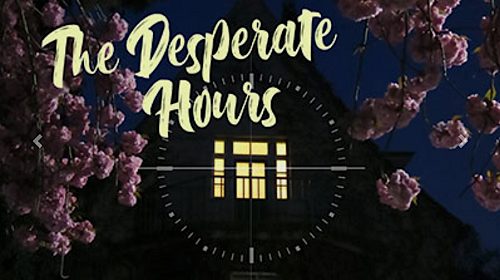 This past weekend were the opening nights at the Group Repertoire Theatre’s revival of the classic thriller The Desperate Hours, a Tony-Award winning Broadway hit from 1955 and later a high-caliber Hollywood movie directed by William Wyler.

The play about three escaped convicts invading a family’s home and holding them hostage was based on Joseph Hayes’ 1954 thriller novel about a typical suburban family living on the outskirts of Indianapolis when their pleasant home is abruptly invaded by three prison escapes who turn the situation into a jungle of cunning and violence. Under the director Jules Aaron, the Group Repertoire Theatre in North Hollywood has chosen to resurrect this play which was influenced by actual events back in the 1950s, Joseph Hayes wrote a critically praised debut novel which attempted to capture the power struggle between two alpha males from very different backgrounds, as they vy for control of a dangerous situation. This well-executed hostage drama pits a cold-blooded escaped convict Glenn Griffin against his crafty hostage and family man Dan Hillard, who is held captive at gun-point in their suburban Indiana home.

The family consists of Daniel’s wife Ellie (Gina Yales) , their teenaged daughter Cindy (Kal Kemmet) and young Ralphie (Jackson Bethel), now held hostage in their own home. Griffin connects with his out-of-town girlfriend with instructions to deliver a large sum of money to the Hilliard address. In the 1955 film directed by William Wyler, Glenn Griffin was played by Humphrey Bogart, opposite Frederic March as Daniel Hilliard. The actual house used in the 1955 film is familiar to many as the Leave It to Beaver house from the television series. In the original stage production on Broadway, Paul Newman played Griffith.

Deputy Sheriff Jesse Bard (Fox Carney) organizes a search for the escapees, but progress is slow. The activity at the local police station is slow and the rather lethargic local Deputy Sheriff Jess Bard seems distracted, as does his fellow officer Tom Winston (Bruce Nehlsen). Because the convicts escaped from a nearby federal penitentiary, the regional FBI officer Harriet Carson (Katelyn Ann Clark) arrives to try to manage the search for the escaped convicts. In the meantime, the wait for the money takes longer than expected and the home occupation drags beyond one day.

Griffin, the lead of the home invaders, allows Daniel to go to work and the daughter Cindy to go out on a date with her fiancé Chuck (Mason Kennerly) to maintain a semblance of normalcy in the neighborhood. But the strain of the hostage ordeal starts to take a toll, tensions mount between Griffin and Daniel and among the convicts, while innocent visitors to the house stumble into mortal danger.

The Desperate Hours deviates from the typical hostage drama by affording the victims some flexibility of movement. Griffin allows Daniel and Cindy to repeatedly come and go from the house unsupervised, on the pretext they will not dare alert the authorities as long as Ellie and Ralphie are under threat at home. It’s a tenuous argument. While the freedom of movement increases location diversity, expands the tension into Daniel’s workplace and draws the fiancé Chuck into the drama, it also undermines Griffin’s competency.

The play capitalizes on the crash of the two strong characters, the convict Glenn Griffith and the family man Daniel Hilliard. The career criminal with his cohorts and the well-to-do businessman with his family are suddenly forced to deal with each other, and it’s a well-staged duel spiced by the brewing unease between Griffin and the boorish Simon Robish. Cindy’s presence as an attractive young woman caught in the clutches of desperate men adds a further element of menace, with Griffin’s ability to control Robish’s primal urges always in question.

A strong police dragnet eventually corners the escaped convicts, but the script (by Hayes) moves in the Act 2 to a man-to-man final confrontation, the hardened criminal and the family man destined to determine the outcome. Hilliard realizes he is in the best position to help his family, deploying strategy to compensate for his lack of natural aggression. The sparring between these two alpha males seems to be at the heart of the play and, with it, the fairly typical Freudian psychology of male aggression as was popular in the 1950s. The convict Glenn Griffith is the product of a broken home, with an abusive father and absent mother and that psychological profile emerges towards the end of the play, as Hilliard begins to assume his own form of an aggressive male animal fighting for control of the situation.

Glenn Griffith, as portrayed by Davino Buzzotta, likes his sense of “freedom” as an outlaw who managed to outsmart the system of law enforcement and wants a measure of revenge against that system designed to defeat him. Surrounded by the domesticity he never experienced, Glenn Griffin unleashes his fury on hostile suburban normalcy. Griffith cares about his younger brother, also an escaped convict, who seems lost without his older brother calling the shots.

Meanwhile at the local police station, the general fumbling of the police officers is not much improved by the presence of a female FBI agent Harriet Carson (Katelyn Ann Clark) assigned to the case. The police station is situated stage right on a space of its own in this production and the somewhat humorous ineptitude of the police seems to provide a comedy of errors in contrast to the increasingly dangerous situation at the Hilliard home. Police organize a statewide manhunt for the escapees and eventually discover the distraught family’s plight. Griffin menaces and torments the Hilliards and threatens to kill them. The refuse collector, George Patterson (Steve Shaw), happens upon the situation after noticing Griffin’s car in the garage. He is forced to drive into the country, then murdered.

The convicts are waiting for the arrival of a package, being sent by Griffith’s girlfriend, that contains funds to aid the three fugitives in their escape. This woman never arrives but eventually the package does make it to Hilliard’s office in town. Daniel Hilliard, the family patriarch, convinces law enforcement personnel that their plan to storm the residence is too risky for his family. He then plays a trick on Griffin using an unloaded handgun, then forces him out of the house with his own weapon trained on him. Griffin is subsequently gunned down when he hurls the firearm at a police spotlight and makes a break for it.

There’s a clear theme in this play about masculinity and what it means to be a man. Many exchanges between Hilliard and Griffith, Hillard and his young son, Griffith and his brother Hal, and even the debate about strong-arm versus cautious tactics between the detectives emphasize this. The tempering voices in the film are Eleanor Hilliard (Gina Yates), in a fairly strong role for a 1950’s housewife, the “Spitfire” daughter Cindy (Kat Kemmet), and the female FBI agent Harriet Carson (Karelyn Ann Clark), who is a take-charge voice of reason at the police station.

The production definitely captures the suburban world of 1950s America, when white America largely thought that “crime” and “criminals” were something far afield from their daily lives. With the weaponry available today and the kind of home security systems many people have in place, the story would certainly not look the same today. Police handling of situations like this today would probably end in a much bloodier ending. The psychopathology of criminals, as portrayed today in movies, would never be so generous to the concerns of the escaped convicts and their limited understanding of how society did them wrong.

The director Jules Aaron has a long history of successful production of plays all over the United States and has worked with many well-known actors of stage and film. More recently Jules Aaron directed the premiere of David Sessions’ Two Fisted Love at the Odyssey Theatre in Westwood and Agatha Christie’s The Secret of Chimneys for GBT.

The Desperate Hours just opened and runs through Sunday, July10 at the Lonny Chapman Theatre of the Group Repertoire Theatre, 10900 Burbank Blvd., North Hollywood 91601. Tickets are $30.00. For tickets and more information, call (818) 763-5990 or go to: info@thegrouprep.com