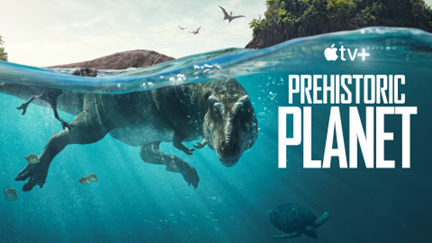 Prehistoric Planet is like a dinosaur theme park for the curious mind.  It’s almost as realistic as the 3-D adventure known as Jurassic Park and I have a feeling I’m going to be Google searching dinosaurs for the next couple weeks now.  Take David Attenborough and introduce him to the prehistoric world and finally you’ll pay attention to a world people like me have chosen to ignore my entire life.

My irrational fear of dinosaurs goes back a couple decades to the moment I watched two children screaming in a jeep as a vicious t-rex tried to chomp their guts out.  Since that point, dinosaurs have seemed like a teeth-gnashing bloodbath in my wild imagination.  I can’t help but shutter when I think of giant lizards attacking one another… and by the way, “Tyrannosaurus” is Latin for “tyrant lizard” so I’m not just imagining it.

David Attenborough and I go way back, though.  He may not know it but I’ve been listening to the man’s scholarly accent and soothing tone for several years now.  For me, David Attenborough has been a guide into our mystifying world.  The Planet Earth narrator has introduced me to colorful tropics and turbulent seas.  There is, of course, no one better but Attenborough to chronicle this new dinosaur miniseries.  Brother to actor Richard Attenborough, who played the role of CEO and creator of Jurassic Park, the narrator is carrying on the dinosaur legacy with this new series.

Prehistoric Planet is set circa 66 million years ago and it follows the lives of dinosaurs just as a nature documentary would film and narrate a real life jaguar or a pack of wolves.  The creatures are truly larger than life with the exceptional graphics seen here.  And one forgets that these dinosaurs on screen were not actually physically filmed.  During this five episode series the audience is stunned with scientific details and speculation, bringing the drama of the dinosaur era to unsightly heights of reality.  What is the deal with the stubby arms of a t-rex?  Stay tuned to find out.

Set to a cerebral chapter of Hans Zimmer’s epic orchestral style, this series feels like it could be viewed in an IMAX theatre.  It journeys the lives of Pterosaurs, Triceratops, and more battling it out for survival.

Executive Producers Jon Favreau and Michael Gunton tem up for this big scale adventure.  While Gunton has produced many nature documentaries I’ve watched on repeat in my kitchen including Planet Earth II and Dynasties, Favreau is new to the nature scene.  However, Favreau has produced blockbusters like Avengers and The Mandalorian series, as well as directed major hits like Iron Man, Elf, and Disney’s live-action The Lion King.  From where I’m standing, these guys can do no wrong.  Anything either Favreau or Gunton have touched have been beautiful cinematic experiences.  Even if it is a massive prehistoric ordeal, these guys make it look like a walk in the park.

This is the dinosaur version of Shark Week.  Not only is it informative, it’s entertaining and visually breathtaking.  The graphic team that worked on this project should truly be rewarded for the hyper reality they accomplished here.  Andrew R. Jones and Adam Valdez directed the series in a way that creates a story of survival worth sharing.  With exceptional cinema and groundbreaking science behind it, Prehistoric Planet leaves me marveling at our glorious planet, as well as the modern technology that accomplished it.  The series imprints upon us the great adventure of life.  And it certainly proves that documentaries have carved out a worthy territory for entertainers and audiences to venture.

The docuseries is what I’d describe as raw and dramatic cinema.  When I saw the trailer for this dinosaur saga, I actually took note to the day of its release and looked forward to watching it.  It seems predestined that I was later asked to review it for its premiere this week.  I can only hope for more from this powerful creative team.  What better way to prepare for summer than to explore the dangerous lives of dinosaurs and imagine that fantastic world through a more realistic lens than ever seen before?

Episodes are released daily on Apple TV from May 23 to 27.