WHAT: “The Conners” cast EPK interviews detailing their preparation and what to expect for the live episode on the night of the New Hampshire primary. The cast will perform the episode live for both the East and West coast broadcasts. ABC News coverage of the first-in-the-nation New Hampshire primary will be incorporated into the story in real-time as the results roll in during the evening.

Please note: Laurie Metcalf is not featured in the EPK interviews but will be in Feb. 11’s live episode.

ABOUT “LIVE FROM LANFORD” EPISODE:

“Live From Lanford” – Mark is watching the results of the primary for a school report with Harris, who is apathetic to the electoral process and believes money’s influence in politics means real change is impossible. The rest of the Conners share their differing takes on why they all think everyone should vote, including their working-class perspective that you may have to vote for a candidate you don’t love but one that will “screw you the least.”

All of this happens against the backdrop of romance when Louise (guest star Katey Sagal) gets an opportunity that might send her away from Lanford, prompting the family to interfere in Dan’s (John Goodman) complicated relationship with her by throwing Louise a surprise going-away party, creating major new tensions between Dan and his daughters. 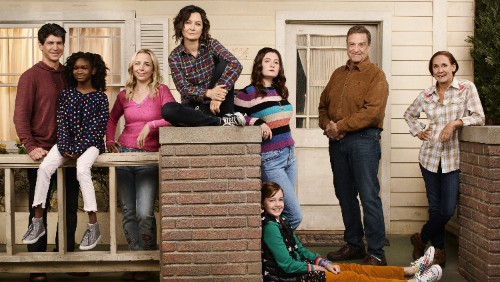 Guest stars will include Katey Sagal as Louise.

“Live From Lanford” was written by Bruce Helford, Bruce Rasmussen & Dave Caplan and was directed by Jody Margolin Hahn.

For more information on “The Conners,” visit ABC.com.