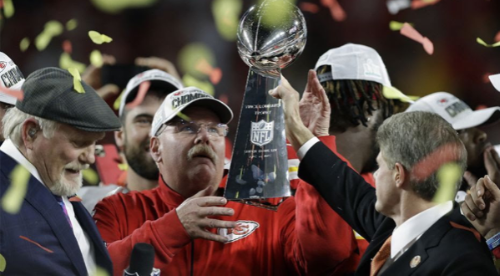 The early, live, half-hour variety program “The Victor Borge Show” debuted on NBC in 1951. Borge’s blend of music and comedy earned him the nicknames “The Clown Prince of Denmark,” “The Unmelancholy Dane,” and “The Great Dane”…Also on this day: Fred bought Wilma a piano for their 10th anniversary on ABC’s “The Flintstones” in 1961; Ida Morgenstern (Nancy Walker) went to the doctor for the first time in decades on “Rhoda” on CBS; and Crockett (Don Johnson) and Tubbs (Philip Michael Thomas) were convinced that an attorney was doing more than just fighting for drug dealers on NBC’s “Miami Vice” in 1989…

Did You Know?Nathan Lane co-starred opposite Mickey Rooney and Dana Carvey in a 1983-84 sitcom called “One of the Boys.” TV Guide ranked it number 24 on its TV Guide’s 50 Worst Shows of All Time list in 2002.

Latin superstars Shakira and Jennifer Lopez performed at halftime of Super Bowl LIV on Feb. 2, 2020 inside Miami’s Hard Rock Stadium. Latin rapper Bad Bunny made a guest appearance during the set.
Many hits were performed including Shakira’s “She Wolf”, “Whenever, Wherever,”, and “Hips Don’t Lie”; Jennifer Lopez’s “Jenny from the Block”, “Ain’t It Funny”, “Love Don’t Cost A Thing” and “Let’s Get Loud”.
To view Shakira and Jennifer Lopez’s entire halftime performance, click here
NEW PROGRAM ANNOUNCEMENTS

The CW Orders New Pilot for “The Lost Boys” RebootThe CW has given a new pilot order (with a new director, Marcos Siega, and a new cast) to the planned TV version of 1987 vampire movie “The Lost Boys” from Warner Bros. Television. Last May, the network said the project would be redeveloped after passing on Rob Thomas and Heather Mitchell’s initial pilot starring Tyler Posey and Kiele Sanchez.

The logline: When a mother and her Gen Z sons move to the seaside town where she grew up, they discover there’s a sinister reason the local cool kids sleep all day, party all night, never grow up and never get old. Family bonds are tested as the brothers find themselves on opposite sides of a mythological struggle.”

The interactive game show pits three teams of two against the clock and each other as they attempt to identify the biggest hit songs of all time. In the end, the team with the most money banked will outlast the competition and go against Shazam, the popular song identification app, for the chance to win one million dollars. The series has featured numerous celebrity guest stars, including Mariah Carey, Shaq, TLC, Snoop Dogg, Odell Beckham, Jr., Michael Bolton, Smokey Robinson and more.

Netflix Cancels Musical Drama “Soundtrack” After One Season
Netflix has opted against a second season of musical drama “Soundtrack.” The series, which was developed under the title “Mixtape” for Fox, was described as a romantic musical drama that “looks at the love stories connecting a diverse, disparate group of people in contemporary Los Angeles through the music that lives inside their hearts and minds.”

The 20 Most-Watched TV Shows That Followed The Super Bowl
One of the interesting network scheduling moves every season is what show will follow the Super Bowl. This Sunday after Super Bowl LIV on Fox was the spring season premiere of “The Masked Singer.” That singing competition is already proven, so this can only be of benefit. But while the exposure for a debuting series following the most-watched telecast of the year is often significant, it is no guarantee that the show will succeed.

Once upon a time, what program would occupy the post-Super Bowl time slot was never much of a concern. But that has since changed. For more, click here

Happy 70th Birthday to Game Show “What’s My Line?”
Successful game shows never really end. Ultimately, they come back in revivals. So, I do imagine there will eventually be another version of classic panel game show “What’s My Line?,” which celebrates 70 years since debuting today.

Launched on February 2, 1950, “What’s My Line?,” hosted by John Daly and produced by Mark Goodson and Bill Todman, replaced an early half-hour newspaper drama called “Front Page” (which also featured John Daly). It began its initial 18 season run on alternate weeks until September 1950, and then every Sunday at 10:30 p.m. ET for the next 17 years. For more, click here

Food Network Debuts “Girl Scout Cookie Championship”
You know those cookies you can basically eat a whole box in one sitting? Those Caramel deLites, Peanut Butter Patties, Do-si-dos, Thin Mints, Toffee-tactics and Lemon-Ups, to name a few? These beloved Girl Scott cookies will be the theme of a new four-hour Food Network competition series, “Girl Scout Cookie Championship,” hosted by “How I Met Your Mother” star (and former girl scout) Alyson Hannigan, beginning this evening at 8 p.m. ET.

Yet another reboot comes to television when this spring, the revival of Vince McMahon’s XFL, short for the Extreme Football League, begins action. It first debuted back in Feb. 2001 to big TV audiences, but its viewership had quickly eroded and the league folded after one season.
This time around, the XFL had more time to prepare for its relaunch with former pro football quarterback (and athletic director) Oliver Luck as its commissioner. It reached broadcast deals with ESPN and Fox Sports, including 25 games broadcast on ABC and Fox.
The XFL features eight teams playing a 10-week regular season schedule beginning February 8, 2020, culminating with the championship game on April 26, 2020. For the complete schedule, click here
MARK YOUR CALENDARS

History non-scripted “Eating History,“ which follows vintage food expert Old Smokey and collector Josh Macug, two friends, on a quest to uncover, unbox and eat the oldest, most nostalgic, and shocking foods to have survived history, will premiere on Wednesday, March 11 at 10 p.m. ET. The pair takes viewers back in time to find foods believed to have been lost to the past, and with every bite they discover which eats have conquered time, revealing forgotten eras and the stories they hold as they explore history through old food.