Hollywood, CA (The Hollywood Times) 6/4/19 – In fine form, the 13th Annual American Spirit Awards ceremony and luncheon once again upstaged itself. The Caucus for Producers, Writers & Directors event honored individuals in what is imperiously known as “the industry” who support, protect, and promote the interests of storytellers.

Honoree Henry Winkler, still fresh off his first ever Emmy win last September, for his incredible work on the under-appreciated “Barry,” shared stories from his legendary career. The oratory earned him a standing ovation.

The Caucus also honored Larry King (accepted by LA Dodgers announcer Charley Steiner) with the American Spirit Award. The Humanitarian Award was given to Professor Hildreth (Hal) Walker and Dr. Bettye Walker. Their honors were presented by James Hirsch.

The Distinguished Veteran Award belonged to Chase Millsap, a decade long veteran of the U.S. Marine Corps and Army Special Forces. Millsap is a filmmaker and Chief Content Officer at We Are the Mighty. His award was presented by Norman Powell.

Cristina Kotz Cornejo was the recipient of the Caucus Special Achievement in Educating New Filmmakers Award. Kotz is a Professor and Associate Chair of Production in the Department of Visual and Media Arts at Emerson College, Boston. Gary Grossman presented her with the honor. 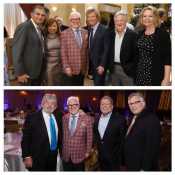 Their 37th Annual Awards Dinner will be held in November, in keeping with tradition. To learn more about this remarkable organization and their mission, visit: http://www.caucus.org/about/index.html