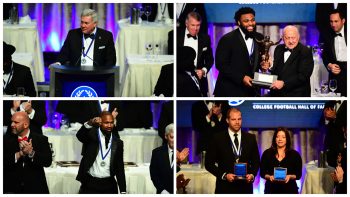 Los Angeles, CA (The Hollywood Times) 11/30/2018 – The Caucus Foundation, a support organization for student filmmakers, held its annual awards ceremony Friday evening at the Ahmanson Theater at the Skirball Cultural Center.  Funded by the collective membership of many of Hollywood’s elite, the Foundation honored many of the movers and shakers for their achievements in entertainment this year.

The many honorees and attendees reflected on their work and careers on the Red Carpet.  Run DMC (now known as Rev. Run), honored along with Justine Simmons as Entertainers of the Year said, “For myself, personally, just to know that I’m enjoying what I’m doing.”  He continued, “The common theme is to make sure that before you get into any project that you feel that you love what you’re doing…There’s no reason to try to succeed at something just to try to make money or just to hear somebody screaming my name.” 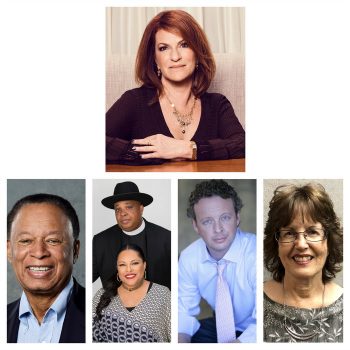 Penny Rieger, Caucus Controller and Administrator of the Foundation, got her own honor that night after 43 years of leadership with the Caucus.

The Hollywood Times – “How has your life’s work with the Caucus fulfilled you?”

Rieger – “I’m of the work ethic that you give more than the average.  Then you can’t go wrong.  I found a job that I love, so that helped tremendously.”

Jake Rademacher, maker of the impactful war documentary Brothers At War, featuring his own brothers who are soldiers currently serving in Iraq.  Jake spoke of the power of the television medium.  “Only 1% of Americans actually serve in the military.  For the remaining 99% Brothers At War provides them an authentic view of a world they’ll never be a part of, and can’t fully understand.  No other medium can do that.”

The Executive of the Year honoree was Sandra Stern, President of Lionsgate Television.  One of the most powerful women in the entertainment industry, Sandra spoke of her company which currently has some 90 programs on television across all networks and platforms.  “You know, we’ve got a very, very good staff.  Of those 90 shows, many of them are managed by Pilgrim, a company that we had bought.  My role is to be there whenever they need me. But we (Lionsgate) are probably juggling 20-25 shows at any one time.    But, I know they are so good that they seldom need me.”  Sandra spoke further about her role as executive.  “One of the things I like to say is, because I don’t sing and I don’t dance, I make a very big effort to find those that do.  We rely heavily on our talent.  We’re there to support them, give them their space, and let them express their creative voice.”

Also, in attendance was Executive Producer of Handmaid’s Tale and nominee for the producers award, Bruce Miller.  Miller talked about the evolving challenge of this groundbreaking show.  “The pressure is different.  In the first season, you’re taking a beloved book and trying to turn it into a TV show.  You know, ‘you’re gonna ruin it’, that’s your big worry.  But then once you do it and it’s successful, and people like it, then the expectation is different.  You know, now you’re worried about not living up to what the audience is counting on.  The real daunting promise is the same at it’s always been.  How to tell an interesting story and how to give your other storytellers – your actors, your director of photography all of those people – a story to tell that makes sense, that is interesting and complicated on every level.”

Alex Ruzinski, nominee for the directors award for the landmark success Jesus Christ Superstar, make an appearance on the carpet.  He talked about the unique challenge of bringing an iconic stage show to the small screen.  “When we take these incredible works and we try and transform them onto the small screen, the first thing that I try and do as a director is make it an immersive experience.  You try and embed the audience right in the heart of the action.  You try and make them feel that it’s an incredible, 360, visceral entertainment piece.  That’s what we try to aspire to.  To make the connection resonate with people at home.”

A night of deserving honorees and industry heavyweights gave The Caucus Foundation their yearly buzzworthy showcase.  The proceeds and buzz from the night are what keep this organization going in carrying out its mission as coined by Penny Rieger:  “We’re able to create a foundation where we’re able to support college students finishing their thesis films.  We’re one of the few in the nation that does that.”  In return, the attendees gave anyone that is listening some insights to apply to their own careers, and an endorsement of the Caucus for them to consider.