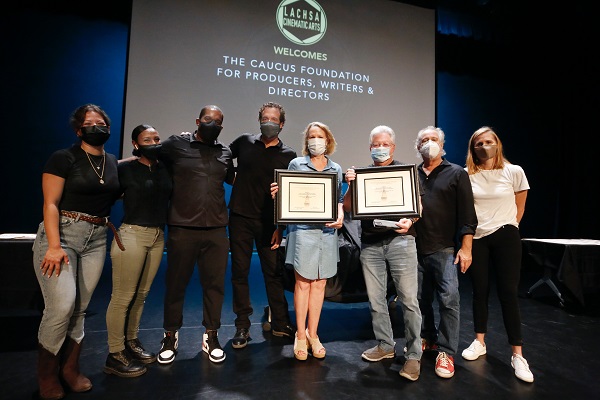 Los Angeles – Thanks to the overwhelming success of the 2021 Virtual Awards Gala, Co-Chairs of The Caucus for Producers, Writers & Directors; James Hirsch and Robert Papazian, and Deborah Leoni, Acting Executive Director, and The Caucus Foundation  have been able to support six worthy grant recipients.

The grant donations kicked-off at LA County High School of the Arts (LACHSA) Cinematic Arts Department in September in front of a packed auditorium filled with excited students.  Since then, grants have been made to the American Musical and Dramatics Academy (AMDA); A Place Called Home; Champs Charter High School for the Arts; LA City College, and the Youth Cinema Project.  Each of these schools or organizations used the grant monies to support their existing programs and missions or to purchase much-needed equipment and software.

A Place Called Home’s Senior Director of Development, Katie Alheim acknowledged the Caucus grant stating,  “Please know that this gift is now helping children learn the art of storytelling through cinema, photography and scriptwriting, while internalizing the value of their personal perspectives and the strength of their own voices”.

The success of the Annual Awards Gala has enabled The Caucus Foundation to continue its mission of scholarship support, financial grants and mentoring of a diverse group of talented students. To date nearly $2 million has been awarded to students at accredited colleges and universities across the country. The Foundation receives support from The Annenberg Foundation, Angell Foundation, Panavision, illuminate Hollywood and other funders.  This commitment to help young talent has never been more important than it is right now as they work towards discovering and mentoring the next generation of entertainment talent.