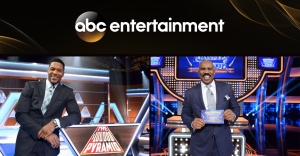 Hosted by “Good Morning America” co-anchor Michael Strahan, the Emmy Award®-winning pop-culture phenomenon, “The $100,000 Pyramid,” is reimagined and better than ever when a cast of all-star celebrities take center stage and partner with contestants from across the country to compete against each other with hopes of making it to the winner’s circle and the ultimate grand cash prize. The show ran #1 in its 10:00 p.m. time slot on Sundays this summer and retains 100% of its lead-in among Adults 18-49.

“Returning for season three definitely goes under the category ‘Things that are Awesome,’” said Strahan. “It has been such an honor continuing the legacy of the legendary Dick Clark as host of ‘Pyramid.’ Looking forward to another season of giving away ABC’s money.”

“Celebrity Family Feud” pits celebrity families, and their immediate family members or their extended TV families, against each other in a contest to name the most popular responses to survey-type questions posed to 100 people. Celebrity teams from the world of entertainment, music and sports compete against each other to have fun and win money for charity. Hosted by Steve Harvey, the highly popular standup comedian, actor, author and Emmy® Award-winning game show host, “Celebrity Family Feud” is the most-watched show in Sunday’s 8:00 p.m. hour this summer.

Harvey said, “The politically correct reason that ‘Celebrity Family Feud’ has struck a chord is because it’s a great show where people can play along at home and everyone can join in on the fun. The true reason it’s a success is because they went and got me to host. It’s been a blessing to host this show, I’m one of those people who loves what they’re doing.”

“Celebrity Family Feud” is produced by FremantleMedia North America and is taped in front of a live audience in Los Angeles, California. Gaby Johnston and Jennifer Mullin are executive producers.