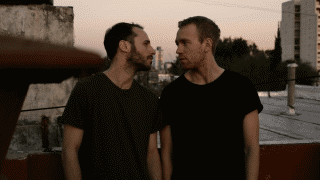 A film by Marco Berger

“A wonderful love story that takes you on a journey between two men who slowly and ever-so-cautiously court each other.”

In the suburbs of Buenos Aires, Gabriel has just moved in with his colleague, Juan. Shy and reserved, Gabo is reluctant to follow Juan’s wandering hands and meaningful looks. With a revolving door of beauties streaming out of Juan’s bedroom, his machismo seems firmly in place. However, the attraction between the two men is undeniable. What starts out as a sexual relationship based on convenience of location, soon develops into the engrossing evolution of a tender and intimate relationship, which is as sweet as it is heartbreaking. But, as reality begins to set in on their homemaking fantasy, something has to give, or does it?

Marco Berger was born in Argentina. He studied at the Universidad del cine in Buenos Aires. is first short, The Watch, competed in Cannes and Sundance. Plan B, his first feature, quickly became a classic in queer world cinema. His second film Absent won the Teddy Award for best feature in Berlinale 2011. After Hawaii, his third fi lm, he presented Butterfly in Berlinale and later won the Sebastiane Latino in San Sebastian Film Festival. Taekwondo his fifth film won the Sunny Bunny Award at the Molodist Film Festival. Marco was also nominated three times and winning one time for the prestigious Silver Condor Award in Argentina. The Blond One is his sixth film with the World Premiere at the Queer Screen Mardi Gras Film Festival in Sydney in February 2019 and The Hunter, his new project is in post-production stages.

This film started out slow and took a bit for me to grasp. The cinematography shows you images through open doors, short bursts within the workplace, riding the train and such. But as the film continued, you watched this slow, cautious and wonderful relationship blossom.  These two men both with girlfriends, start to get to know each other.  What I liked most about this film between two men was that lack of the obvious sexual activities. You are given ‘hints’ that something happened. Yes, yes, you see them laying in bed, nude but Marco did a great job of telling the story without showing the “steamy acting out” scenes. Although other films I’ve reviewed have had that, and I didn’t mind, with this film, it wasn’t necessary to tell the story and would’ve detracted from its cinematic value.

What this tells me is that Marco was more focused on the telling the story of these two men growing together than watching them have sex. Bravo!  The curiosity of these two men between each other is riveting and you see that with Juan (Alfonso Baron) then with Gabriel (Gaston Re).  It makes you “root” for them in a way that says, “C’mon guys, show me the romance already!”

As the film progressed you started to see them go through a change and when you least expect it, the film does a twist on you. Yeah, it most certainly does!  Another Bravo for Marco. Brilliant plot maneuvering. Yeah, I made that one up, but I mean it. You think you have it nailed and then, OMG, it’s not what you think.

All in all, it’s the interaction when Gabriel visits his daughter and you’ll understand why this is so, when you see this film, tugs at your heartstrings. Ornella (Malena Irusta), is one thing that Gabriel holds dear and when you see the last scene, you’ll begin to understand, and you can’t help but smile.  I give this film an 8 out of 10 and I can’t wait for more from Marco Berger. He’s a brilliant filmmaker with a future that driving him forward in so many ways.

As we say in Italian, Marco, Molto Bene Gracie!