“The origins of Sheldon have been something we’ve been interested in writing about for a couple-hundred episodes of “The Big Bang.” Chuck Lorrie

Beverly Hills, CA (The Hollywood Times) 9/25/17 – A tall order by any measure; imagine the world-record beating M.A.S.H., rolling out a Young Hawkeye prequel. How could it possibly have the aura and quality of the original, not to mention the longevity?

Dr. Sheldon Cooper (the T.V. character) has reached a quasi-mystical plateau in our pop culture. He’s a sliver of evolution in a dark landscape of mediocrity. Like his beloved Spock, Sheldon will likely exist in some form long after Jim Parsons joins Leonard Nimoy in a strange new world.

The inevitable Big Bang spinoff Young Sheldon is a one camera, ensemble affair that revolves around the childhood travails of a 9 year old Sheldon Cooper. Young Sheldon will be played by Iain Armitage, a talented and quick-witted young actor. With The Big Bang Theory approaching an inevitable expiry date, CBS is getting to work early on some sort of strategy to fill the gaping hole that its flagship series will eventually leave in its comedy line-up.

Young Sheldon tries to hit that sophisticated, family sweet spot that The Wonder Years mined so successfully for so many seasons. A recent panel with the brain trust of Young Sheldon revealed The Wonder Years to be not only an influence, but a template lovingly grafted into the fabric of the new show.

The show has assembled a great cast which includes Zoe Perry playing young Sheldon’s mom; a role played on The Big Bang Theory by her real life mom Laurie Metcalf.  Lucky break for CBS, to be able to direct inject some of the parent show’s DNA into the mix.  Perry’s portrayal is spooky and pitch-perfect.

While Iain Armatage is a gifted young actor, the show will rise or fall as an ensemble effort. Young Sheldon is a cute, well adjusted (considering). However, I missed the condescending snap of his future self. And Sheldon’s father (Lance Barber) doesn’t seem to be the closed off, drunken crud described by adult Sheldon. But, let’s be patient, a character as complex and carefully developed as Sheldon Cooper can’t be deconstructed in one pilot episode, and the producers promise lots of character development on the horizon.

As long as CBS keeps its expectations modest, Young Sheldon should hit all its marks and find its niche audience for seasons to come.

CHUCK LORRE: “The origins of Sheldon have been something we’ve been interested in writing about for a couple-hundred episodes of “The Big Bang.” And so last fall, when Jim sent me an email discussing the possibility of actually taking it a step further, it just seemed like the greatest idea in the world. And so I called Steve, and he thought it was a great idea. And we called Peter Roth, and he was pleased. And then Les Moonves was actually very excited about it, and here we are.”

The producers were asked about playing fast and loose with the back story of Sheldon as documented by The Big Bang Theory,

CHUCK LORRE:  “No, we’re not going to play fast and loose, but this is five years before that date that we discussed in the series, in “Big Bang,” and people change and grow and develop and things happen over the course of many years. And we don’t necessarily have to follow an exact time line. You know, a season of “Young Sheldon” doesn’t have to be a year. It could take place over a couple months. So we have a lot of freedom with the backstory, and there’s a great deal more to George, his father, than we were led to know in Sheldon’s anecdotes about his dad. And, yes, we’re going to show that there is a great deal more to the man than we discussed in this, in little bits and pieces we’ve done over the years on Big Bang”.

Chuck Lorre talked about the obvious comparisons to The Wonder Years,

CHUCK LORRE: we absolutely discussed Wonder Years when we were writing. And I never worked with a narration before, and narration changes the way you write. And so we looked for inspiration to shows that used it beautifully. Nobody did it better than Wonder Years.” 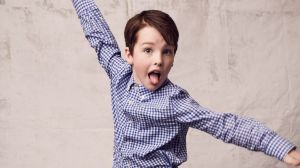 CHUCK LORRE: “It’s more intimate. The pacing, obviously, is very different. The actors aren’t having to hold for laughs. They’re not playing to the proscenium. They’re not playing out. They’re working with one another. You know, a four camera show is played like a theatrical presentation. They’re playing to the audience, and it changes the tone and the pitch and the pacing. And also, we knew going in that we were going to be working with a cast of young children, and it seemed like the more appropriate way for them to get the best work, to do the best work, was in a closed setting where they had the time to develop these characters.”

Lorre went on to discuss the adjustment of presenting a younger version of such an iconic character,

CHUCK LORRE: “Well, one of the things we learned going in is that Jim has a magical quality, and when he addresses the character of Sheldon, he can be despicable. He can be so difficult and hard on his best friends, and yet, somehow, he has a quality as a person where the audience forgives him. It’s kind of wonderful. But when you take those same qualities and ask a nine year old to bring that, it’s a brat. That’s not something that’s very pleasant.

And so we made a decision, Steve and I, early on that we’re going to enter his life when he’s very naive, when he’s not yet become cynical and overly control he has his idiosyncrasies, but he’s a much more vulnerable and naive character as we enter the story in 1989.”

Zoe Perry talked about the unique opportunity to play her mother’s character of Mary Cooper as a younger woman,

ZOE PERRY: “Well, I mean, genetics do a lot for me. This is my voice. Certain mannerisms just come with the territory. I mean, upon knowing I was going to audition for this, I re watched all the episodes that she was in, because I just wanted to be sure that I was in the same ballpark as her.

But I think what’s so wonderful and a privilege to play Mary Cooper at this age is that we don’t know her at that stage of her life yet. So I think it provides me a little bit of flexibility. And also, the kids are so much younger, and my approach is different with them at that age.”

Jim Parsons discussed his role as the narrator of the series,

JIM PARSONS: “It is great fun, I have to tell you, to get to record this while watching the scene that I’m recording over. It’s unlike anything I’ve done. And I think, at this point, it’s still my knowledge of the adult character that’s carrying with me and really focusing on his commentary of the memory that he’s sharing with you or whatever. But, you know, there’s a whole thing about Iain, everybody in the cast, but especially the three kids, is this enthusiastic embrace that is all too easily lost sometimes the more you work, and it serves it’s such a wonderful reminder, kind of a basic 101 lesson about the enthusiasm and joy with which to embrace these opportunities and these roles and these scenes. I don’t like to think that I’ve forgotten any of that, but I have to admit seeing somebody like Iain take over this part, it’s, like, “Oh God, this really is fun, isn’t it?” I don’t know. Does that make sense?”

The Magic Castle to re-open May 21