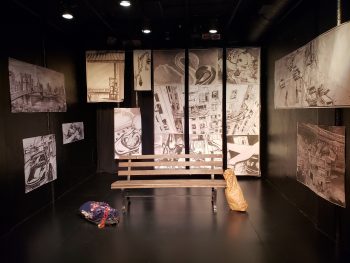 Breaking the fourth wall – which he does after each scene, Galinsky explains the 5 characters we are introduced to. We meet Graveyard a Vietnam Vet who went to prison for aggravated assault and lost everything. He became a grave digger after getting out and his nickname stems from that. Joe a merchant marine veteran once hailed as an “American Hero” despite his own injured leg is now on his death march with an empty heart-shaped box he keeps for Lorraine. She was accused of making a pass at a younger student after flunking him and became an HIV drug addict prostitute. Mark is a byproduct of bad shock and psychotherapy treatments. JD a truck driver who lost it all after an accident.

Galinsky announces we’re back in 1987 when gas prices were 85 cents, the Pope held and kissed a 4-year-old child with AIDS at the height of the epidemic, Aretha Franklin was inducted into the Hall of Fame for her signature song, Respect and as he dressed and stepped into one of several homeless characters we are introduced to in the next 60 minutes. This was also the year that The Mckinney-Vento Homeless Assistance Act was signed into law by then President Ronald Reagan – to assist homelessness in America. 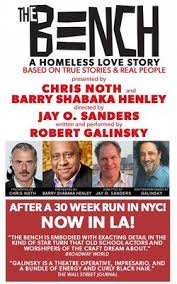 Galinsky’s work as an artist/activist is commendable from the numerous organizations he has coached or taught through writing and/or performance that he lists in his bio: TEDxTeen, TEDxFultonStreet, Rikers Island Jail, Literacy for Incarcerated Teens and GalinskyCoaching.com – his characterization of the homelessness falls short of the depth of despair, deception and horrors of being on the streets by using tamer language than one hears or sees on the streets of any city with a large homeless population. The characters seem more of a different time – like the 50’s and tame in presentation. There is nothing galvanizing about this piece that makes the viewer feel their individual and collective lives as they meet on or near the park bench.

Daphne Arthur’s set design is an imaginative urban splendor. The audio design by Deep Singh gives a hint of being in the city but is remiss in giving us the richness of the park that the park bench inhabits. Missing are the other voices. 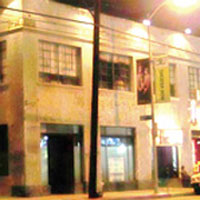 When Galinsky starts out the two characters he initially introduces cause confusion and it’s almost by accident. One feels he’s talking to himself – which is a common sight which drug addicts in the dark recesses of being tuned out but at the same time so sharply tuned in to whatever reality their inebriated brain dictates. This may have been a wonderful character choice to make as opposed to doing broken up vignettes with a description to the audience.

Galinsky also is noted for work he does with Research Foundation to Cure AIDS, the downtown Women’s Center and Lollipop Theatre Network.

Although, Garlinsky deserves an A for effort as it’s apparent he holds dear subjects that need continuous attention and should matter to us all.