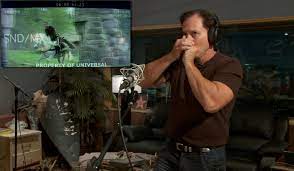 Los Angeles, CA (The Hollywood Times) 10/24/21 – In the case of the artform of Foley sound, it is a case of “Camera, action, sound!.”  Most movies make audiences think, feel and in the case of foley, listen.   Albeit unknowingly.

This “invisible” somewhat mysterious but vital part of the filmmaking organic process has its roots circa 1920’s. It prevails to this day.

Foley artists or “sound actors” have been behind the scenes of many major motion pictures, and have been awarded Golden Reel awards, amongst other industry accolades including  Motion Picture Sound Editors Achievement awards.

With the opening of the Academy of Motion Picture Arts and Sciences Museum in Los Angeles, Jack Donovan Foley would be proud. The total experience of film involves sound and vision.  Necessarily in that order when it comes to sound effects.  Foley is a big part of that. The “Backdrop: An Invisible Art” makes one think of sound effects – and foley.

Jack Foley, that is.  Foley was recognized as the pioneer of this namesake art. The sound effect artists who have developed the technique in both film and television have a creative if not unique lot in their work.

So says Cathi Foley Doran Clark, granddaughter of Jack Foley, and a resident of Thousand Oaks, a city north of Los Angeles.  She has made it her mission to promote and preserve the legacy of Foley, the noun and adjective. Jack and the craft of sound.

Irish-American Jack Foley started his career at Universal Studios way back in 1926.  This was the era of silent movies.  Cathi said he was inventive in synchronizing and became a sound engineer. He figured out that the most effective way to enhance sounds for films was to create the sounds’ effects himself. And the most efficient.

His name eventually became a verb, as in “Foley It!” Hollywood insiders knew what that meant, but to many it is still a unknown part of the movie and television production.   His first sound was a Tarzan yell for a silent Tarzan series of short subjects which Universal made for Saturday matinees in the late 1920s; this was the only sound heard.  Then he was assistant director of “Hunchback of Notre Dame” starring Lon Chaney.

How is Foley  sound created or performed?  It takes different forms, for the different effects being created.  For example, a celery stalk being broken is used to portray the crushing of bones in a horror movie, such as “Creature of the Black Lagoon.”

On the back lot of Universal Studios, the sound crew for “Thunder,” Foley walkers seen on screen credits pioneered that art in the 1940s doing, for example, boot clicks for Audie Murphy.  Jack Foley estimated he walked a total of 5,000 miles on the studio sound stages doing footsteps for the stars.   Some action-packed scenes required 25 or more separate sound tracks of Foley.  MCA bought Universal Studios in 1955.  Ninety editors from Review (the TV arm of MCA) moved in and the original nine editors at Universal taught them how to “Foley.”

Next season?  The sound of surprise as they got laid off.

Soon, everyone was talking about “making Foley.”  The term came into widespread usage throughout Hollywood, and now is used worldwide.  Official Foley stages are in every country, per Cathi.  Such as George Lucas’ Skywalker Sound, near San Francisco.  Many people in the industry, producers, directors, even Foley editors, did not understand what Foley meant.  Was it a machine or what?

Jack Foley’s legacy lives on in every film and TV show we watch.  And hear.

A National Public Radio (NPR) segment from “All Things Considered” said “He did his job best by not letting anyone know he existed.”   Cathi said his voice was never recorded, and there aren’t any pictures of him at his trade, however, he’s best remembered by his Foley crew.

In the ‘40s, films included those of Bud Abbott and Lou Costello, “One Night in the Tropics” and “Buck Privates.”

Cathi said Abbott and Costello were good friends of her grandfather.  From 1940 to 1945, budget musicals with contract players such as Ann Blyth whom he called “The Brat,” Peggy Ryan, Gloria Jean and multi-talented Donald O’Connor.  “Phantom of the Opera” (1948) and “Bowery to Broadway” (1944), “My Little Chickadee” in 1940 with W.C. Fields in which he was teamed with Mae West.

Personally, I think Foley is fun. It reminds me of the scene in the 1975 film “Monty Python and the Holy Grail” where a  Knight of “Ni” is riding his horse and the accompanying character Patsy uses coconut shells for the sound effects of the horse hooves clopping. It was hilarious and made you think about sound effects, albeit organic and indeed primitive but nonetheless effective.

The myriad of possibilities of objects that can be used for sound effects and the exploring the intel on this creative mind boggling mythology of “secrets” behind the scenes and screen, be it film (or television) sounds intriguing.