By Dr. Laura Wilhelm, LauraWil Intercultural
Beverly Hills, CA (The Hollywood Times) 3/16/17 – On the evening of Thursday, March 16th, 2017 the Beverly Wilshire Hotel located at 9500 Wilshire Boulevard played host to the inaugural Humanitarian Ball of the American Red Cross.  The ARC was formed in 1916 with the US poised to enter World War I, “the war to end all wars.”  At this time 25 concerned residents met at the Hotel Alexandria in Downtown LA to form a Red Cross chapter in the City of Angels.

Now after 100 years of valiant service to those in need during times of crisis, the LA chapter celebrated its centennial by honoring Disney as the Humanitarian Company of the Year during this auspicious black tie gala.  LA business leaders, philanthropists, and celebrities including Elisabeth Rohm of LAW AND ORDER, Vincent Irizarry of DAYS OF OUR LIVES and ALL MY CHILDREN, and Jai Rodriguez of QUEER EYE FOR THE STRAIGHT GUY populated the high profile guest list along with Jarrett Barrio and Andrea Davis, CEO and Chair of the Red Cross Los Angeles Region, and Bob Chapek, Chairman of Walt Disney Parks and Resorts. 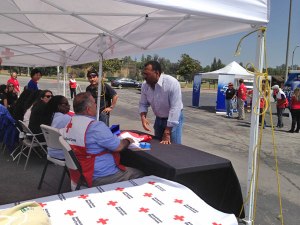 The event was emceed by Marc Brown of KABC Eyewitness News.  Stunning red gowns and red roses punctuated the somber elegance of the storied Beverly Wilshire and attendees were able to view vintage Red Cross nursing uniforms stationed amidst the revels.
This reporter was elated finally to intersect with esteemed 67-year-old actor John Savage, who has become something of a fixture at red carpet functions all over our city.  The gruff-voiced Savage is best remembered for his rugged blond cowboy-style persona and great performances in seminal American films such as THE DEER HUNTER (1978), HAIR (1979), and THE ONION FIELD (1979).

Savage has also guest starred on top television shows such as LAW & ORDER and STAR TREK: VOYAGER.  His powerful stage performance as the mentally ill patient Billy Bibbit in ONE FLEW OVER THE CUCKOO’S NEST, which netted him a Drama Circle Award, attests to the range and sensitivity of Savage’s thespian talents.

Later in the 1980s and 1990s, Savage threw his star power behind the anti-apartheid struggle in South Africa, working alongside Nelson Mandela and director Spike Lee for many years.  He also helped to organize the Manhattan Children’s Theatre Group and currently has several projects in development.  Multi-talented actors like John Savage have helped to define the American spirit on many fronts.
“I love modern classics,” Savage has said.  “They tell you so much about America, how things were.  The time it’s about wasn’t all that long ago.  But we often forget times, and things, we should remember.”

Now Savage enjoys traveling the world and seeing films like THE DEER HUNTER and HAIR screened at retrospective festivals in former hot spots such as Serbia.  He loves meeting different kinds of people wherever he goes in Los Angeles and overseas.

For all these reasons John Savage exemplifies the humanitarian spirit that has fueled the American Red Cross for 100 years.  Hats off to all who continue to manifest and uphold humanity’s highest values in the face of great global turmoil!