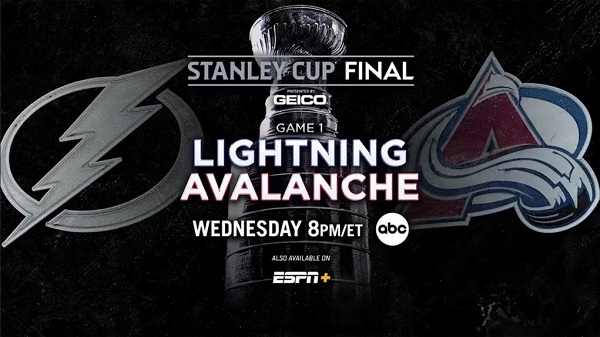 The puck drops on the 2022 Stanley Cup Final presented by GEICO WEDNESDAY, JUNE 15, featuring the Tampa Bay Lightning at Colorado Avalanche beginning at 8 p.m. EDT. Each Stanley Cup Final game will be available on ABC, ESPN+, ESPN Deportes and the ESPN App. In addition, a special alternate presentation of the game – Ice Cast – will give fans a view of the matchup from above the ice and provide added player and team stats.

The Colorado Avalanche welcomes the two-time defending Stanley Cup Champion Tampa Bay Lightning in what will be the first Stanley Cup Final game in Denver since 2001, when current Avalanche General Manager Joe Sakic led the Avs to their second Stanley Cup. The Avalanche finished the 2022 regular season with 119 points (56-23-8) and are coming off a four-game sweep of the Edmonton Oilers in the Western Conference Final and Nashville Predators in the first round. The Avalanche won both regular season games against the Lightning, with Nathan MacKinnon and Gabriel Landeskog each scoring three points in the matchups.

The Lightning enter the Final with 11 consecutive series wins and look to become just the sixth team in NHL history and first since 1983 to win three straight Stanley Cup titles. Making their fifth Stanley Cup appearance in franchise history, the Lightning surpass the Pittsburgh Penguins for the most appearances among NHL clubs since 2004 and can become the first franchise since the Penguins to win four Cups in their first five appearances. The Lightning finished the regular season with 110 points (51-23-8). Nikita Kucherov enters the 2022 Stanley Cup Final with a team-leading 23 points, two shy of joining an elite list of NHL players who have reached the 25-point mark in three straight playoff years. The Lightning forward has accumulated a combined total of 89 playoff points since 2020. The only players in NHL history that recorded more over a span of three years are legends Gretzky (five times; most recently: 99 from 1987-1989) and Mario Lemieux (96 from 1991-1993). 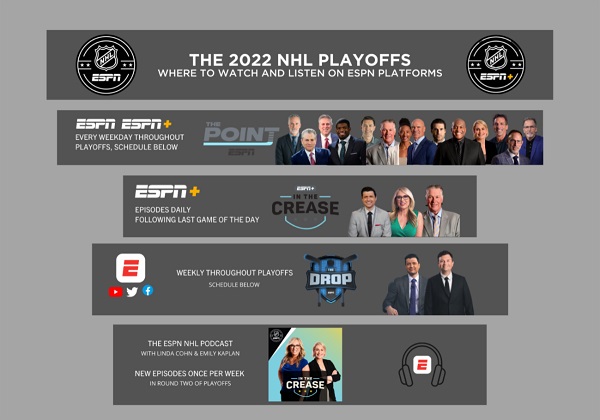 Sean McDonough will be on the call with analysts Ray Ferraro and Brian Boucher, along with Emily Kaplan reporting from Ball Arena in Denver and Amalie Arena from Tampa Bay. As a lead-in to all Stanley Cup Final games, Steve Levy, Mark Messier, Chris Chelios and Brian Boucher will preview the upcoming action from onsite during the Stanley Cup Final Preview Presented by Verizon at 7:30 p.m. EDT on ESPN+. Additionally, that same lineup of analysts will provide preview coverage to the 6 p.m. “SportsCenter” on ESPN and continue to offer analysis during intermissions and postgame.

ESPN’s NHL-focused studio show, “The Point,” will be produced from Denver for Game 1 and airs daily on ESPN2 and ESPN+. New episodes of “In The Crease” stream exclusively on ESPN+ each game day, immediately following the conclusion of each Final game, with in-depth analysis, interviews, highlights and more.

The commentator and telecast information for each game is detailed below. Commentator assignments and coverage details for the Stanley Cup Final beyond Game 4 – if necessary – will be announced in the coming days. All Stanley Cup Final games will also be available for replay on ESPN+.

“Quest for the Stanley Cup”

“Quest for the Stanley Cup,” the behind-the-scenes documentary series chronicling the remaining eight teams competing in the 2022 Stanley Cup Playoffs and vying for the chance to hoist the Stanley Cup, continues every Friday, exclusively on ESPN+.

The 10 most pivotal players in the Stanley Cup Final

Quest for a three-peat alive: What we’ve learned about the Lightning

Why the Avs must be seen to be believed

WEDNESDAY: Big questions ahead of Game 1 of Avalanche-Lightning