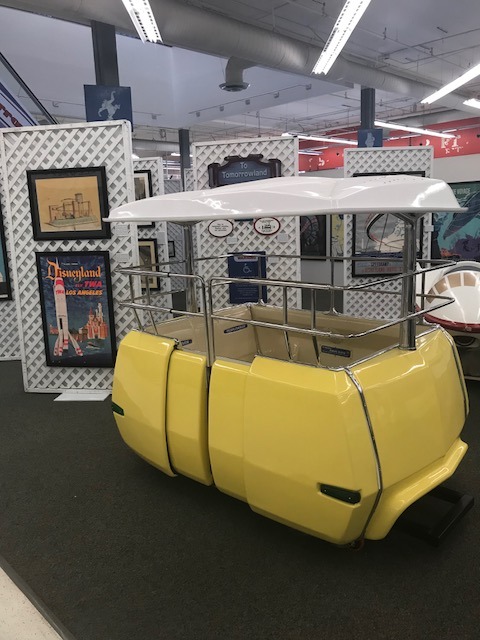 Sherman Oaks, CA (The Hollywood Times) 8/1/18 – Nicholas Kraft didn’t exactly have a typical childhood.  It could be described as a Wonderland.  Or Neverland.  Or even Frontierland or Fantasyland. 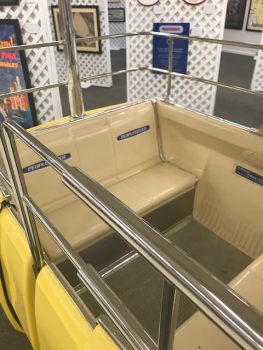 Kraft’s father is Richard Kraft, an avid collector of Disneyland memorabilia.  And according to Nicholas, Richard spent the better part of his son’s childhood filling the home with magic.  Now, at the end of an era for the Kraft family, it’s time to liquidate that collection—well known as one of the world’s largest private Disneyland memorabilia collections.  But the Krafts didn’t want to do that until the public at large had a chance to enjoy the remarkable Disneyland finds.   Hence, a free pop-up exhibit and auction that just opened at Van Eaton Galleries in Sherman Oaks.

The Kraft collection took a full quarter-century to build up.  It covers six full decades of Disneyland history and features 750 items.  The media had a chance to preview it Friday.  Sunday, social media influencers gathered for an even more festive event.  What they found is that Richard Kraft’s treasures constitute a rich historical set, thick with the nostalgia of countless trips to the Magic Kingdom.

“I was the one that was growing up,” said Nicholas of growing up with his father’s collection, at Friday’s media event.  “He was staying perpetually 12.” And according to him, that’s not always a bad thing.

“It was great!  I think he used me as a fall man; you know ‘we’re collecting this together! I get to collect all these toys because I have a son,’” Nicholas laughs heartily when remembering his father’s interminably juvenile obsession with all things Disney.  “It was always amazing to have this place to come back to with friends.  Everyone just wanted to come over and hang out.”

While Nicholas admits that having a Mr. Toad car in the entertainment area, a Tiki Room for a bedroom, and an iconic 40-foot Submarine Voyage Sea Serpent by the pool was a major draw, he did say that it eventually “faded into the background.”  “At some point it just kind of becomes home,” he told THT.

Does Nicholas have a favorite piece?  “I mean, the Dumbo’s pretty iconic,” says Nicholas of the Dumbo The Flying Elephant Attraction Vehicle.  They’d have costume contests during birthday parties, he relates, and sit atop their Dumbo “throne,” judging Disney-themed costumes.

Nicholas and his father Richard have that much in common—they both answered “Dumbo” when asked which piece of the collection was their favorite. “It’s beautiful,” Richard told THT.  “Just as a piece of art.  As a sculpture he’s gorgeous, and all of his sweetness comes through.”

Experience plays into Richard’s endearment with Dumbo, as well.  He can’t help but love the piece he not only played in as a child, but kept in his home as art as a parent and adult.  “I sat in him and went around and around all those years.”

The years past, and now, says Kraft, he and his son are doing something they’ve never done—work together.  “This is the first time Nicky and I have ever worked together.  So to do a project that means so much to us personally, is a real joy of this.”  In the past, they played.  And “Nicky,” as Richard affectionately refers to his son, was the excuse for all the fun.  “I’ve spent my whole life using him as my human shield to justify doing stuff, pretending it’s in his interest,” he laughed. “I think most parents act like that.”

So starting today, the public is allowed to roam through Van Eaton Galleries and glean some of the joy that Nicholas and Richard enjoyed through a robust lifetime of Disney magic.  The collection is simply breathtaking, and almost too much to take in.  Once you think you’ve taken enough pictures, or detailed enough pictures, you’ll always feel compelled to go back one more time.  The memories it evokes are striking, and personal, to each person who goes through.  Every era of an American icon in theme parks is covered.

Will Richard Kraft miss his collection?  Both he and Nicholas say they will miss more the experience of sharing the Disney memorabilia, rather than the actual pieces.

“I plan to devote the rest of my life to driving to people’s houses and visiting this stuff,” said Richard.  “Have you ever visited one of your childhood homes and knocked on the door and asked if you could see inside?  It’s the same thing.”

www.thatsfromdisneyland.com  Visit the site for more information on related panels and events ongoing throughout the month of August