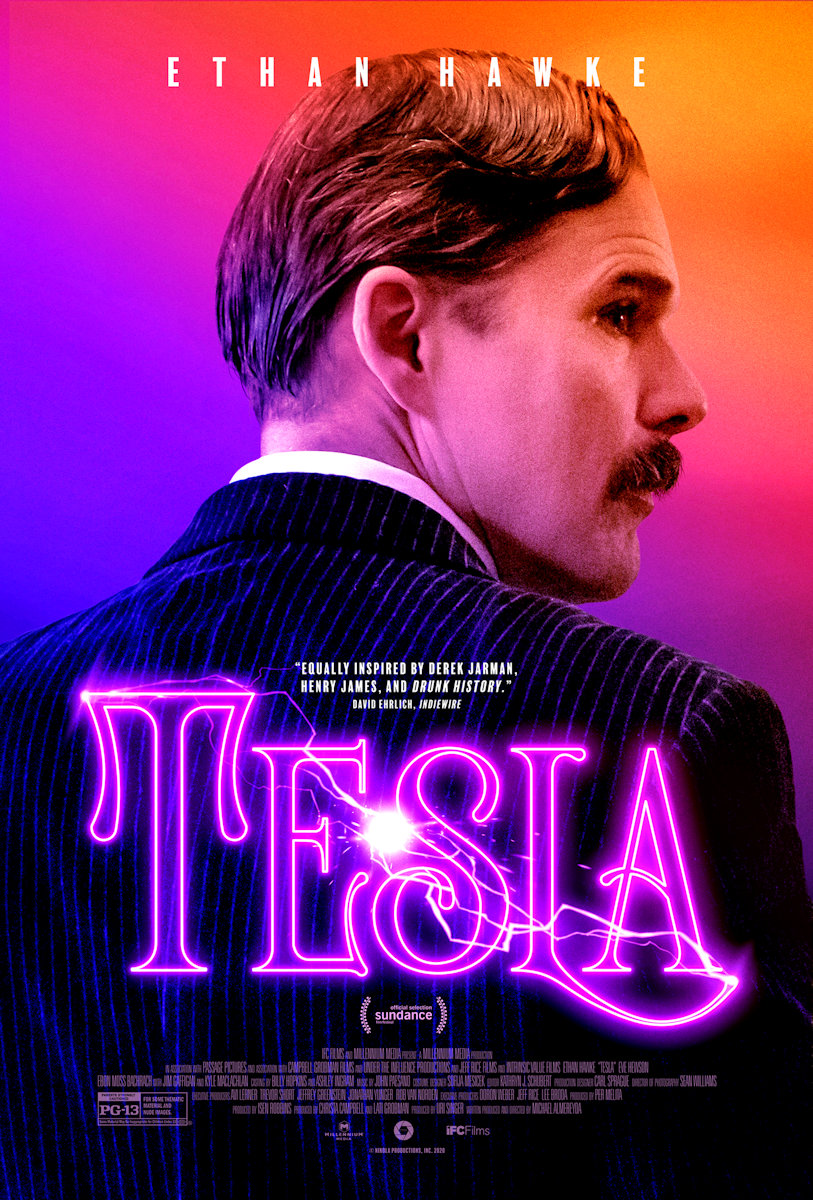 When Tesla stroked a cat, a small, quiet little spark appeared between his fingers on the cats back. Then Tesla had a thought:

Is nature a gigantic cat and if so, who strokes its back?

About Tesla:
TESLA, Michael Almereyda’s (MARJORIE PRIME; EXPERIMENTER) idiosyncratic portrait of the misunderstood electrical engineering genius Nikolai Tesla (Ethan Hawke). Almereyda’s lifelong obsession with Tesla began as a spec script written in his early twenties for Jerzy Skolimowski, and has evolved using subsequently published material, with the films of Derek Jarman, the novels of Henry James and certain episodes of Drunk History cited as key influences. This freewheeling, deconstructed biopic opened at the 2020 Sundance Film Festival, where it was awarded the Alfred P. Sloan Feature Film Prize. IFC Films will release TESLA in theatres and on demand on Friday, August 21.

Historical Figures featured in the Movie:
THOMAS EDISON (1847–1931) Thomas Edison was an American inventor and businessman, considered one of America’s leading innovators and entrepreneurs. He rose from humble beginnings to become an inventor of major technologies, founding what became the General Electric Corporation. His inventions include the first practical incandescent light bulb, the phonograph, and (with William Kennedy Dickson) the first motion picture camera.  Edison also established the first industrial research laboratory.  He held over 1,000 U.S. patents for his inventions.

MINA MILLER EDISON (1865–1947) Mina Miller Edison was the second wife of Thomas Edison. They were married in 1886, after the death of Edison’s first wife, Mary Stillwell Edison, in 1884, the year Tesla went to work at the Edison Machine Works. Mina raised their three children, in addition to three children from the first marriage.  She also served as Edison’s business confidant and home executive of their estate in West Orange, New Jersey.

GEORGE WESTINGHOUSE (1846–1914) At age twenty-two, George Westinghouse invented an air brake system that made railroads safer and earned him a fortune.  In 1886 he founded the Westinghouse Electric Company and proceeded to develop and promote alternating current technology, revolutionizing the world’s light and power industries. Thomas Edison and his supporters waged a smear campaign against the AC system, telling the public that it was a dangerous health hazard, but Westinghouse prevailed, purchasing Nikola Tesla’s patents and proving AC technology to be practical and effective.

J.P. MORGAN (1837–1913) J.P. Morgan was an American financier and banker who dominated corporate finance on Wall Street throughout the Gilded Age. As head of the banking firm that ultimately became known as J.P. Morgan and Co., he was a driving force behind the wave of industrial consolidation in the U.S. spanning the late 19th and early 20th centuries. The multinational corporations Morgan spearheaded include U.S. Steel, International Harvester and General Electric, and Morgan came to wield enormous influence over the nation’s lawmakers and finances. He was also a prominent art collector and philanthropist.

ANNE TRACY MORGAN (1873-1952) Anne Tracy Morgan was educated privately, traveled frequently and grew up amidst the wealth amassed by her father, J. P. Morgan.  After his death, she increased her activity as a philanthropist and activist, providing relief efforts to aid France during and after World War I and World War II.  She was awarded a medal from the National Institute of Social Science in 1915, the same year she published The American Girl: Her Education, Her Responsibility, Her Future. In 1932 she became the first American woman appointed a commander of the French Legion of Honor.

SARAH BERNHARDT (1844 – 1923) Sarah Bernhardt was a French stage actress who achieved worldwide fame and acclaim, starring in some of the most popular French plays of the late 19th and early 20th centuries, including La Dame Aux Camelias by Alexandre Dumas, fils, Ruy Blas by Victor Hugo, Fédora and La Tosca by Victorien Sardou, and L’Aiglon by Edmond Rostand. She also played male roles, including Shakespeare’s Hamlet. Rostand called her “the queen of the pose and the princess of the gesture”, while Hugo praised her “golden voice”. She made several theatrical tours around the world and was one of the first prominent actresses to make sound recordings and to act in motion pictures.

ANTHONY SZIGETI (1856–1890) Anthony Szigeti was a Hungarian engineer who befriended Nikola Tesla during their student days at Prague University. He joined Tesla working at the Central Telegraph Exchange in Budapest and was with him when Tesla conceived his AC induction motor. The two men continued working together in Paris and Strasbourg. Tesla funded Szigeti’s travel to the United States in 1887, after which Szigeti served as his trusted assistant and confidante.  Szigeti died in South America in 1890, shortly after the two men parted company, as Szigeti was intent on proving himself as an inventor in his own right.

ROBERT UNDERWOOD JOHNSON (1853–1937) Robert Underwood Johnson was an American writer, magazine editor and diplomat.  In 1873, he joined the staff of The Century Magazine, one of the best-known literary magazines of the period.  He became the magazine’s associate editor in 1881, and in 1909 took over as editor in chief.  Johnson was also noted for his work in international copyright law and environmental conservation, and he was a driving force for the effort to acquire and preserve as a museum the rooms in Rome where the poet John Keats spent his final months.

The Review:
Tesla came to America with an open heart filled with expectation and hope!  In working with Edison, he was overworked slept less and believed in the saying: “Nothing grows in the shadow of an oak.”

Born in 1856 in Croatia, he sees a flash and a vision that is the motor that will drive him.  A man who says he doesn’t care about money, can find himself tormented by the lack of it.  Whereas Edison, valued money and makes it in great quantities but spends it more than he makes it. Edison was left with three young children when his wife died at the age of 25. Tesla was swindled out of money when he tried to start Tesla Lighting Company which left him penniless. He falls into the rut of poverty and dug ditches for power lines and cables for Western Union.  After a humiliating year, Tesla was introduced to Charles F Beck and Alfred S Brown by a sympathetic foreman.  From his meager $15.00/mo. with Edison, he was set up with a lab and given $250.00/mo. and a $50,000.00 fund to develop Alternating Current which Edison felt was dangerous. Tesla proclaimed; it wasn’t.

George Westinghouse was an inventor and businessman. He offered to buy Tesla’s patents for over a million dollars in today’s money. Tesla had an accumulating fortune for decades to come. AC vs DC. It’s a matter of opinion. A challenge to execute a prisoner with Westinghouse alternating current vice hanging him. It’s War!

William Kemler comes to be electrocuted in the first Electric Chair.  Mr. Kemler said, “Don’t rush, I want to get this right.” I don’t know if Kemler knew what he was in for and how true his request was.  They botched it. They gave him the first 1000 volts. He wasn’t dead. Then another 1000 volts. That did it! Another failed experiment. Anne Morgan began to court him.  Who was Anne Morgan? Well, that’s JP Morgan’s daughter of course.  But she feared no one could ever get to Tesla like his mother did.  He had a vision when his mother died and closed into himself for 3 weeks, lectured and came home.

The world’s fair in Chicago uses the Tesla-Westinghouse machines; 250,000 light bulbs and the fair consumes three times more electricity than the city itself. 28 Million visitors from around the world and they all see what Edison has tried to deny: Alternating Current is beautiful and safe.

Tesla and Edison never had a meeting after the World’s Fair.  Edison never apologized. He was just on the wrong side of the fence. Then came wireless energy using EMP energy waves through planet Earth. Tesla was so far ahead of his time.  It will transform the way the world works he promised. No one cared. No one listened.

The paradox is the more we learn the more ignorant we become in the absolute sense. It’s through enlightenment that we are made aware of our limitations.

Then came the Tesla coil. It was like getting the ocean to sit for a portrait.  This movie is unique and like the movie I reviewed called: Ovid and the Art of Love, the simplicity of the sets, the quality of the actors and the beauty of the merging of today with yesteryear and the actress portraying Anne Morgan narrates the film as well telling you, “Google it!” is a great touch!

Tesla moves a better version of the Tesla Coil to Warnenclyffe, Long Island on December 19th, 1901. A new century, a new project and with JP Morgan having a 51% share in Tesla’s patents, deep in debt, and with messages from “Mars”, things seem a bit, distraught and disjointed. But, whatever you thought of Tesla or think of him now, or read about him, seen movies about him, the fact remains, that what Tesla brought to our world was nothing short of genius, vision and brilliance.  He was so far ahead of his time that the US Government dismantled and took custody of all his papers and his remaining projects. Everything that he did could not be duplicated. Why was that?  What was it about Nikola Tesla that changed our world and made it better than ever was?

You want the answer? Money! Especially Tesla’s invention for passing wireless transmissions through the planet could not be broken up into salable parts to make money. No one can own it. Planet Earth is not for sale. But not being an economist, everything must be paid for, especially money! Therein lies the biggest problem of capitalism.  If you make it and you can sell it, then profit will be made from it. That, my friends, is something Tesla did not subscribe to.  He wanted to do something for all the people of Earth and give it to everyone for free! But that, my friends, is a NO-NO!  Free is NOT free!

The problem with Tesla is, he was too intelligent, far too intelligent for humankind.  The best part I loved is when Tesla sings “Everybody wants to Rule the World…” Now this is a cool movie. The morphing of new and old but the message is in the words. The message to humanity is exactly what the song says, “Everybody wants to Rule the World…” That is just not possible. This film rocks, literally!  Maybe the world is a dream that Tesla dreamed first.

Interesting facts:
On 7 January 1943, at the age of 86, Tesla died alone in Room 3327 of the New Yorker Hotel. His body was later found by maid Alice Monaghan after she had entered Tesla’s room, ignoring the “do not disturb” sign that Tesla had placed on his door two days earlier. Assistant medical examiner H.W. Wembley examined the body and ruled that the cause of death had been coronary thrombosis. Two days later the Federal Bureau of Investigation ordered the Alien Property Custodian to seize Tesla’s belongings.

John G. Trump, a professor at M.I.T. and a well-known electrical engineer serving as a technical aide to the National Defense Research Committee, was called in to analyze the Tesla items, which were being held in custody. After a three-day investigation, Trump’s report concluded that there was nothing which would constitute a hazard in unfriendly hands, stating:

[Tesla’s] thoughts and efforts during at least the past 15 years were primarily of a speculative, philosophical, and somewhat promotional character often concerned with the production and wireless transmission of power; but did not include new, sound, workable principles or methods for realizing such results.

In a box purported to contain a part of Tesla’s “death ray”, Trump found a 45-year-old multidecade resistance box.

Schools:
Tesla STEM High School created in 2012 in Redmond, Washington as a choice school with a focus on STEM subjects. The name was chosen by a student vote