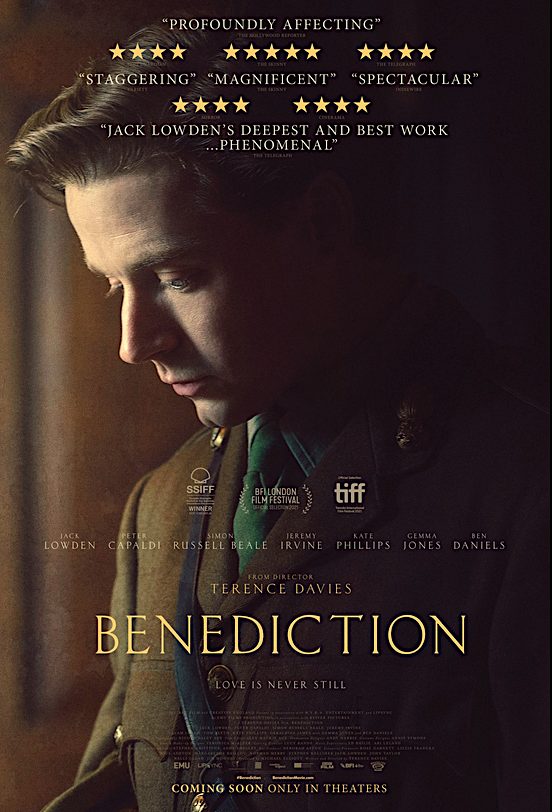 Los Angeles, CA (The Hollywood Times) 6/4/22 – Opening at several Laemmle Theatres this Friday, June 3, is Terence Davies’ newest film Benediction (UK, 2021), an elegant and moving biopic of the famous English poet of World War I – Siegfried Sassoon. Benediction is a subtle but fierce indictment of war and waste, whose only footage of the war is archival. Davies resists the temptation to aestheticize the war by fictionalizing it. To have recreated the Battle of Somme or the trenches would risk making it exciting. Davies allows this unique biopic to unfold like a poem, moving in and out of chapters of Sassoon’s life, including flash forwards to closer to the end of it, as he considers his legacy. Like a lot of Davies’ historical dramas, it feels deeply personal to the filmmaker, one who may too be questioning his place in artistic history. When Siegfried’s son tells him, “Most people live for the moment, you live for eternity,” it feels like something that could be said to Davies too, a director whose films seem timeless.

The opening scenes of Benediction set up a tone of memory or even dream. It opens with Sassoon (Jack Lowden, doing easily the best work of his career) and his brother Hamo attending a symphony before shifting to footage of the growing World War I, to which both men will soon be shipped. Only one will return. Sassoon comes back with deep trauma that sends him to a Scottish hospital to recover. Amidst the horrors of the Great War, army lieutenant and poet Siegfried Sassoon (Jack Lowden) petitions to end the bloodshed, claiming that its prosecutors are needlessly prolonging the war. Instead of being publicly court martialed, Siegfried finds himself quietly confined to a hospital for “nervous debility,” meeting fellow poet Wilfred Owen (Matthew Tennyson). As the film alternately flashes forward to an elderly, embittered Sassoon (Peter Capaldi) and his youthful counterpart surviving the war and moving through the 1920s and 30s, a moving and elegant portrait of life emerges that transcends the artifice of a standard biopic.

In its early scenes, the film’s cinematography has a televisual, almost stagey quality, all unflashy master shots and inserts that prioritizes the dialogue, intercut frequently with sequences of archival footage as Sassoon sardonically recites his and Owen’s poetry. There’s a somewhat staid quality to it, but as the film settles into its 137-minute running time that staidness transforms into steadiness. Indeed, its quiet visuals are at the heart of Benediction’s sense of dignity and remembrance. Its language is not the passionate rage of Sassoon’s youth, but rather of the quiet, profoundly sad reflections of his later years.

Davies layers Sassoon’s poetry read aloud by Lowden with archival, grainy footage from the war, enhancing a sense of detached lyricism, and yet he also doesn’t forget to give it all an emotional undercurrent. It’s there in Sassoon’s impassioned criticism of the war and in the way he forms bonds with his doctor (who is quietly homosexual) and another patient and fellow poet named Wilfred Owen (Matthew Tennyson), with whom Sassoon becomes infatuated. When Wilfred Owen is determined to be fit for a return to the front in Flanders, we sense the heavy weight of his departure and a realization that Owen will be killed fighting in the trenches a week before the Armistice was declared Nov. 11, 1918. His brother Hamo was killed in the Gallipoli Campaign in 1915.

Siegfried Sassoon was born to a Jewish father and an Anglo-Catholic mother, and grew up in the neo-gothic mansion named “Weirleigh” in Kent. His father, Alfred Ezra Sassoon (1861–1895), son of Sassoon David Sassoon, was member of the wealthy Baghdadi Jewish Sassoon merchant family. For marrying outside the faith, Alfred was disinherited. Siegfried’s mother, Theresa, belonged to the Thornycroft family, sculptors responsible for many of the best-known statues in London – her brother was Sir Hamo Thornycroft.  There was no German ancestry in Sassoon’s family; his mother named him Siegfried because of her love of Wagner’s operas. His middle name, Loraine, was the surname of a clergyman with whom she was friendly.

Jack Lowden is perfectly cast as the younger Sassoon, a war hero who received a Military Cross in July 1916 for “conspicuous gallantry during a raid on the enemy’s trenches” on the western front. Yet Sassoon’s near-suicidal bravery (his comrades reportedly called him “Mad Jack”) covered a growing revulsion for the so-called Great War, boldly expressed in A Soldier’s Declaration (published in the press and read in the House of Commons) in which he accused his superiors of turning “a war of defense and liberation” into one of “aggression and conquest.”

Sassoon called his anti-war protest “an act of willful defiance of military authority”, knowing that it could lead to a court martial. Instead, thanks to privilege and connection, he was diagnosed with neurasthenia and sent to Craiglockhart war hospital near Edinburgh, where he met and mentored the younger and arguably more talented Wilfred Owen, whose poem “Disabled” is deployed to devastating effect in Benediction. In Davies’s hands, the comparatively fleeting relationship between Sassoon and Owen (affectingly played by Matthew Tennyson) becomes a turning point for both – the latter discovering a voice that would become increasingly celebrated after his death in 1918, while the former is left in a seemingly unending cycle of grief, disappointment and loss, even when surrounded by high-society glitz and glamour.

Davies’s films have always had a deeply personal edge, from the autobiographically inspired narratives of his early trilogy (Children; Madonna and Child; Death and Transfiguration) to his brilliantly singular vision of his home town, Liverpool, in Of Time and the City. Yet in Sassoon’s story, Davies finds a narrative that cuts right to the heart of several of his personal preoccupations. From the poet’s inner struggles with his sexuality (this is Davies’s most overtly “out” film – sensuous, with occasional hints of bawdiness) to his late-in-the-day conversion to Catholicism (the director turned his back on the church at a formative point), Sassoon’s life offers a wealth of opportunities for Davies to turn his attentions inward, or to project his own experiences on to his subject. No wonder Lowden (who is mesmerizing in the lead role) told me in a BFI interview that, having immersed himself in Sassoon’s diaries in preparation for Benediction, he came to realize during filming that he was effectively playing his director. As director Terence Davies quipped: “I wish I was very good-looking and very stupid.”

After the war, Sassoon found a mentor in Robbie Ross (played by Simon Russell Beale), a journalist known for his relationship with Oscar Wilde and Wilde’s literary executor. Ross was openly homosexual, but had many connections in high society and the theatre. Ross introduced Sassoon to Ivor Novello. Sassoon’s life became a series of romances, including a notable one with someone who seems to be his opposite, Ivor Novello (Jeremy Irvine), who Sassoon’s mother considered “amusing but unpleasant.” Interestingly enough, he had a brief affair with Glen Byam Shaw (Tom Blyth), an actor and theatre director who had been Novello’s lover for a while, but who eventually married a woman. Sassoon seemed to be consistently drawn to men who criticized and almost emotionally abused him, as if he thought he deserved it.

What is left out of the film is the romantic affair that Sassoon had in the early 1920s with Prince Philipp of Hesse, a German aristocrat who later joined the Nazi Party in 1930 and served as Hitler’s art collector. Eventually he ended up in a six-year relationship with Stephen Tennant (Calam Lynch), introduced to him by eccentric poet Edith Sitwell. Tennant was a vain and decadent young man of aristocratic stock (considered to be inspiration for the character of Lord Sebastian Flyte in Evelyn Waugh’s Brideshead Revisited). Tennant who had recurring tuberculosis and was related to Lord Alfred Douglas, the lover of Oscar Wilde. The relationship with Sassoon lasted six years until Tennant took off for Paris and Berlin, leaving Sassoon devastated. Sassoon decided to build a relationship with the charming Hester Gatty. Years later, we meet Sassoon as an older man, played by Peter Capaldi, who is converting to Catholicism and tells his son that he’s seeking something “unchanging.” Sassoon’s life has been one of inconsistency, questioning his sexuality, place in society, and artistic ability. It makes sense that he would try to find stability before he no longer has a chance to search for it.

In September 1931, Sassoon rented Fitz House in Wiltshire, and began to live there. In December 1933, he married Hester Gatty, who was twenty years his junior, and soon afterwards they moved to Heytesbury House. The marriage led to the birth of a child, something Sassoon had purportedly craved for a long time. Siegfried’s son, George Sassoon (1936–2006), became a scientist, linguist, and author, and was adored by Siegfried, who wrote several poems addressed to him. Siegfried’s marriage broke down after the Second World War, with Sassoon apparently unable to find a compromise between the solitude he enjoyed and the companionship he craved. Separated from his wife in 1945, Sassoon lived in seclusion at his house in Wiltshire, although he maintained contact with a circle which included E.M. Forster.

In Terence Davies’ Benediction, there are moments of witheringly witty cattiness, too, as the postwar years find Sassoon in the brightly brittle company of Ivor Novello (a droll Jeremy Irvine) and preeningly snarky socialite Stephen Tennant (Calam Lynch, segueing into Anton Lesser), caustic friends and caddish lovers who merely amplify the emptiness that increasingly engulfs Sassoon. By contrast, Kate Phillips and Gemma Jones jointly offer sympathetic portraits of Hester Gatty, marriage to whom provides him with yet another futile search for redemption. In his later years, Sassoon is played by Peter Capaldi, whose face tellingly seems set in a mask of embittered despondency, bordering upon horror.

There’s something of Stephen Poliakoff in the way that Benediction finds the profound in unfussy quiet, but also of Fassbinder, particularly Berlin Alexanderplatz, his interwar epic that spanned decades. Siegfried’s affair with the famed entertainer Ivor Novello (a deliciously cruel Jeremy Irvine) forms the film’s middle portion, but as Capaldi gradually overtakes Lowden in the third act as the older Siegfried, we come to realize that what we have been watching is not the young man of the past, but rather the memories of the old.

Benediction is a study of trauma echoes across a lifetime, of the way that war freezes time for those caught in it. Benediction an ironic testament to that theft, a picture of youth at once stolen and arrested in place. The film has deservingly been awarded Best Screenplay at a number of recent international film festivals, including San Sebastián and Dublin. It is worth looking at the recent film William Nunez’s The Laureate (2021), starring Tom Hughes as Robert Graves, another English poet whose writing was shaped by his experiences at the Battle of Somme during World War I. They knew each other and ran in some of the same circles in the 1920s.